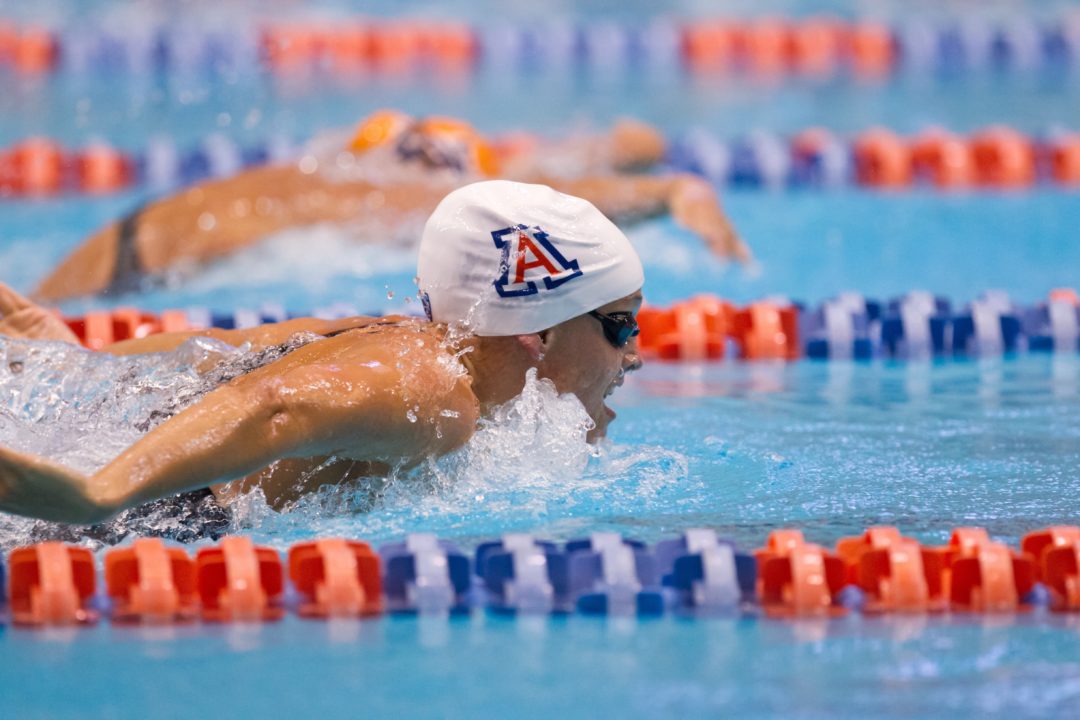 Arizona's Lauren Smart is proving to be a key to their success this season. (Photo Courtesy: ©Tim Binning/TheSwimPictures.com)

In what was maybe the most surprising dual meet result of the spring semester so far, the Arizona women took a stunning 168.5-112.5 victory over the defending NCAA Champions from Cal on Friday night under the lights in Tucson.

Say what you will about the significance or lack-thereof of in-season meets, but taking a 50 point margin of victory, regardless of the time of year, is significant, especially if we presume that the Arizona women are at the same point as their men (who looked pretty tired in the men’s version of the meet).

“I’m really proud of the women’s team for coming together like that,” said Arizona head coach Eric Hansen. “It’s been a work in progress and it’s nice to see them happy and together,” perhaps alluding to the settling-in that has gone on with his roster since he took over as the head coach prior to last season.

The meet started off with a resounding win in the 200 medley relay for the Wildcats, where they swam a 1:38.40 to best Cal’s 1:40.55. These two squads are the two fastest in the country this season (both were 1:36’s mid-year), but that’s a huge result. It included a 27.6 on the breaststroke leg from Ellyn Baumgardner and a 21.65 anchor from Margo Geer. Teri McKeever for the Cal women used yet another combination (she has a lot of options) with Cindy Tran leading off, followed by Caitlin Leverenz, Rachel Bootsma, and Rachael Acker as the anchor. Acker is a great sprinter, and will be very good at year’s end, but make no mistake that Cal is feeling the graduation of Liv Jensen this season.

Other notable swims in the relay included a 28.01 from Arizona freshman Emma Schoettmer on the B and a 25.5 from Stephanie Au on the backstroke leg of Cal’s B.

Cal coach Teri McKeever called the outcome a “wake-up call” after the meet. “The main thing was we were a bit rusty probably from not racing, and we definitely need to be better. It’s a good wake-up call, and we hope to improve as we move forward.”

The Wildcats then went on a roll and won the next two events. First, freshman Bonnie Brandon won the 1000 free in 9:55.51 ahead of Cal sophomore Catherine Breed (10:08.13). Brandon is best known as a World Championship silver medalist in the 200 backstroke, but as a senior in high school last year was the Colorado State Champion in the 500 free as well, showing that she’s definitely got some chops in middle-distance. That’s a season-best for Brandon; conversely Breed, who Cal is hoping for some big scoring from at NCAA’s, was about 17 seconds off of where she was this same weekend last season.

The same two would square off toe-to-toe again in the 500 free, and again it was Brandon coming out on top in 4:50.57; Breed took 2nd in 4:53.75. The two swimmers were about even through the middle 250 yards of this race, but Brandon was faster going out and coming home for the win.

In the 3rd event of the day, Margo Geer picked up her first of two individual wins with a 1:46.86, bettering Cal freshman Liz Pelton in 1:47.25. Geer ran away from the field in the 100 later in the session with a 48.21. Along with her 48.7 relay leadoff to end this meet, she’s the only swimmer in the country to go under 49 seconds since returning from winter training.

Though Arizona got big points in relays and the freestyle events, Cal had plenty of highlights, especially in the strokes where they are better on the top-end than anybody in the country. Cindy Tran, the two-time defending NCAA Champion in the race, won the 100 backstroke in 53.76; a good victory over Arizona’s Lauren Smart in 54.00. Nor surprisingly, Tran was first to the halfway turn before Smart started reeling her back in.

Rachel Bootsma, an Olympic backstroker who McKeever is focusing on the butterfly races given her glut in the former, won the 200 fly in 2:00.93; matched by Liz Pelton topping fellow superfrosh Brandon 1:56.26-1:57.75 in the 200 back.

The most stacked final of the night was the women’s 100 fly, which featured four swimmers who should be A-finalists in the race at NCAA’s. Arizona’s Lauren Smart had the best last 50, and the best total time, winning in 54.41. Cal’s Cindy Tran, who has really improved her 100 fly through the summer and this year, tied with Arizona transfer Megan Lafferty in 54.55; followed by Bootsma in 54.79.

Arizona closed the meet, though, with an even more resounding victory in the 400 free relay than we saw to begin the meet. Splits from the scoreboard were a little off, but led by a 48.7 from Geer (as mentioned above), Arizona wom in a 3:18.33. There were some questions about who would fill out this 400 free relay at NCAA’s, and at this meet it was Kait Flederbach, Bonnie Brandon, and Alana Pazevic.

AZ men beat Cal by 80+ points last year, but it didn’t really mean much. The duel meet format is advantageous for top heavy teams. Still, McKeever is well aware of the implications; she called the loss a “wake-up call.”

Great meet for Arizona women! Cal would have shown better if they had participated in a similar number of prior meets as UofA.

Can’t wait until the PAC12 conference meet which will be a “doozie”! I expect my Cal Bears will be a different team than what they showed Friday.

Also Friday night and under the lights? Wasn’t it an early afternoon meet? Yes the loss of Liv Jensen is significant as the Bears are still working on the right events for their swimmers.