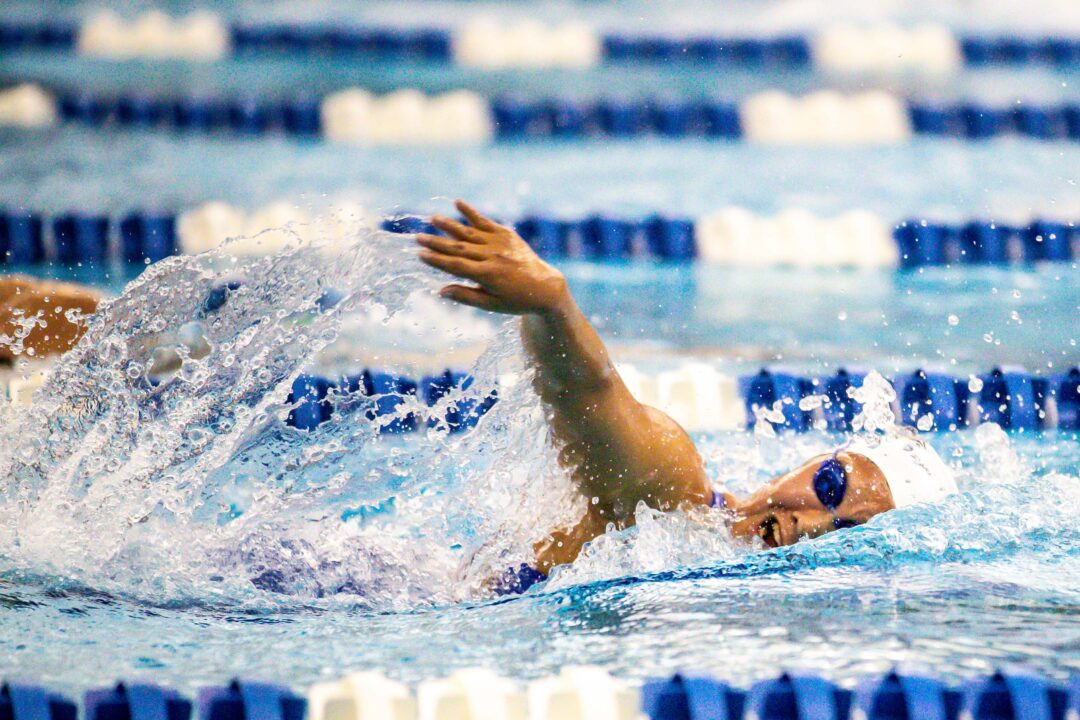 Kayla Han, who was the youngest qualifier for the U.S. Olympic Trials last year, has gotten started 2022 off on a good note. Archive photo via Jack Spitser/Spitser Photography

Kayla Han, who was the youngest qualifier for the U.S. Olympic Trials last year, has started 2022 off on a good note.

Han’s previous PB already had her ranked third all-time among 13-year-olds, where she remains, but she does move up from 40th to 22nd among 13-14s.

Grimes was notably the youngest swimmer to qualify for the U.S. Olympic team last summer, and finished fourth at the Tokyo Games in the women’s 800 freestyle.

Just curious, does anyone have access to the World swimming rankings from 1977 to see if Cynthia Woodhead swam the long course mile at all, or even into early ’78 before turning 14 the beginning of Feb 1978? Can’t recall who won the mile at the 77 AAU nationals in Mission Viejo (maybe Alice Browne in a WR time?), or whether Sippy was entered in that event, especially since that meet served as qualifier for the dual meets that summer between GDR and then USSR, and I don’t think the girls swam the mile at those dual meets, thus Sippy may not have entered the race at nationals???

Han continues to remind me of an incredible comparison, one of those once every several generation younger swimmers that gives much older rivals a big run for their money: Sippy Woodhead, who just after finishing 6th grade, swam at ’76 Olympic trials, youngest entrant. I just located a Swimming World magazine from very early ’77, and in it, its announced she swam untapered, unshaved & no rest, just barely missing the then American record held by Shirley Babshoff. (pretty sure it was the 500 free and done at the SPA-PA qualifier for the dual meet between those two LSC’s.) Between Kayla, Summer McIntosh, and our insane middle distance/distance free depth stateside, I am SO looking forward to seeing what happens… Read more »

Reminds me of young Claire Tuggle who broke numerous NAG records over the course of her career! 1:44.9/4:41.3 as a 13 Y/O! Still a huge talent, going to UVA, and 2x member of JR team (world Junior champ too).

agreed! could even prove in time to have a decent 100-200 free internationally!