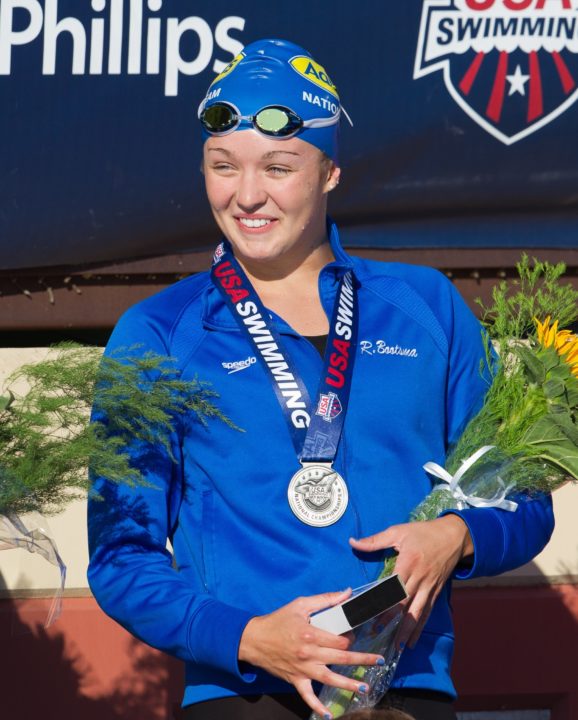 Rachel Bootsma is the face of the Aquajets, but when she moves on to Cal next year, there will be plenty left. (Photo Courtesy: ©Tim Binning/TheSwimPictures.com)

USA Swimming National Teamer, and Olympic hopeful, Rachel Bootsma is the swimmer who put the suburban-Minneapolis Aquajets Swim Team on the national-swimming map.

But that team is not a one-hit-wonder.

The team has a strong tradition of sending swimmers to D-1 colleges, and now the next generation of swimmers is ready to make their stamp. At March’s Minnesota Age Group Championships, the team’s 13-14 girls broke a total of four relay National Age Group Records, with the 800 free relay as the only record they didn’t snap.

The relay not only broke records, they obliterated them. On average, they broke the four records by 1.88 seconds each.

And it wasn’t just the same four swimmers shining. There were a total of 6 swimmers involved in the four records. This same group of swimmers broke two 11-12 National Age Group Records two years ago, and now they’re back for more. It will be really fun two more years from now, in 2014, when they go after the Bootsma-Duncan-Cummings-Behrens records.

With 13 National Age Group relay records to their names now, all on the girls’ side, the Aquajets have to be in every conversation for the best junior/age group programs in the country – especially based on amazing depth. Here’s a breakdown of the four records – and don’t miss the names that were on these records before.

200 Free Relay/1:33.37 – Kaia Grobe (23.52), Bre Thorne (23.54), Emma Wittmer (23.16), Courtney Evensen (23.15)
This swim obliterated the old record held by Sun Devil Aquatics in 2007 of 1:34.70; that’s a relay that included 2012 NCAA qualifiers Traycie Swartz (Utah) and Haley Krakoski (Auburn), along with Tinsley Andrews and Emily Christiansen. What’s scary is that this relay could have probably been a few-tenths faster, as Grobe’s leadoff leg wasn’t close to as fast as she’s capable of (she was three-tenths better in winning the individual race).

400 Free Relay/3:24.37 – Kaia Grobe (50.82), Bre Thorne (51.45), Emma Wittmer (51.16), Courtney Evensen (50.94)
This swim again just totally destroyed the old National Age Group Record, held by NBAC from 2009 at 3:26.81. That means they took the record down by over two seconds. And whenever you hear “NBAC” and “record,” you know that there’s going to be some special names on the relay. This particular swim had bookends from the likes of Felicia Lee and Liz Pelton, both of whom were USA Swimming National Team swimmers before even graduating high school; with Laura Harris and Andi Staub in the middle (both of whom seem to have retired).

200 Medley Relay/1:42.77 – Heidi Katter (26.78), Olivia Anderson (27.93), Bre Thorne (25.15), Kaia Grobe (22.91)
This relay might have been the most impressive of them all. The swim broke the old National Age Group Record by almost two-and-a-half seconds, with the old time being swum by Lake Oswego Swim Club in 2008 in 1:45.11. That relay included Karen Turner, Amy Wiley, Sarah Feil, and Kemy Lin. This relay had several pieces that could have stepped right in the 2012 NCAA Division 1 Championships – including Anderson, the breaststroker. Had Ohio State’s 200 medley relay, for example, had a Anderson as their breaststroker, they would’ve placed 12th instead of 15th at NCAA’s. Those splits for swimmers that age are just stunning. In this race, the Aquajets’ B-relay, which was 2nd, was actually the 8th-best of all time in the age group.

400 Medley Relay/3:45.02 – Heidi Katter (56.88), Olivia Anderson (1:02.21), Bre Thorne (55.70), Kaia Grobe (50.23)
This is another relay that broke an NBAC National Age Group Record (3:46.44), with the same four swimmers (including Pelton on backstroke, her best stroke, and Lee on fly, her best stroke). This Aquajets squad was a relatively-close break…they only cleared the old mark by 1.4 seconds. That includes a spectacular 50.23 anchor from Grobe, who looks like a superstar in the making. Not only did they easily clear the NAG Record, this relay won the race by more than 12 seconds…beating another Aquajets relay. No other team placed within 16 seconds of them.

They are very deep. Also of note is that both the 200 free relay and 200 MR would have been a tad faster with a swimmer from the B relay, Zoe Avestruz