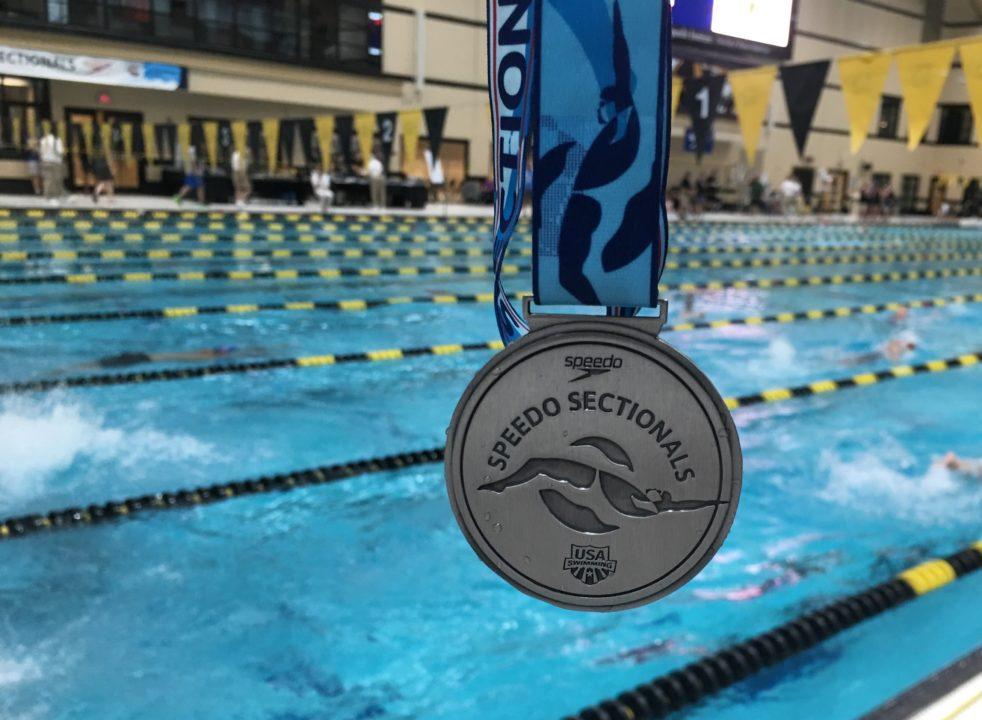 Michael Andrew broke and re-broke two Sectional Records today at the 2016 Central Section Region VIII Championships.  He lowered his own mark in the 100 breast that he set last summer, and fought a hard battle to claim the 100 back against the man who set it in 2014.  Andrew’s accomplishments were only two of many spectacular races in the third finals session at the University of Missouri.

Greater Nebraska’s Dannie Dilsaver got into the lead after the first 100 of the women’s 400 free final, and held it to the end, but that does not mean she had an easy go of it.  This event was a three woman race from start to finish, with Dilsaver, Empire’s Christine Blomquist, and Kansas City Blazers’ Katherine Sullivan breaking away from the rest of the pack by the 200 and battling stroke for stroke all the way to the touch.  Sullivan actually had the best final 100 split of the three at 1:05.35, but ended third at 4:21.89.  Only .15 separated the three medalists at the finish, with Blomquist in second with 4:21.86 and Dilsaver getting her hand to the wall first at 4:21.74.

NCAA All-American and SEC Champion Katharine Ross took the win for Mizzou at 1:10.11 in the women’s 100 breast, followed by Tsunami’s Madison Strathman and Lawrence Aquahawks’ Tori Beeler at 1:11.22 and 1:11.72 respectively for silver and bronze.

Rockwood’s Lauren Votava got out ahead and stayed there in the women’s 200 fly, finishing at 2:16.33 for the win.  Husker’s Dana Posthuma made a surge on the third 50 but was not able to gain enough ground on Votava to put the pressure on, finishing at 2:17.84 for runner-up.  Columbia Swim Club’s Brittany Wen closed out the medals with 2:18.66 for third.  On a side note, in case you are one of those SWIMSWAM readers who keeps track of up and coming age groupers, watch out for 13 year old Kate McCarville from Springfield Aquatics who cut three seconds from her personal best in this event to win the B-final in 2:22.74.  If she had turned in that time for the prelim she would have had a crack at the big girls in the A heat.

Columbia Swim Club’s Dane Florea made a meal of the second half of the men’s 200 fly, splitting 32.44 and 32.21 to separate himself from all contenders by over a body length on his way to a 2:04.31 victory.  Rockwood’s Conner Ripp held strong for second with 2:06.26 and King Marlin’s Richard Wagner finished exactly a second behind him for third with 2:07.26.

The men’s 100 back was a grudge match.  Michael Andrew had taken down Paul Le‘s Sectional Record this morning with his 55.31 preliminary swim.  Le made it clear from the start that he didn’t intend to just let the kid keep it.  Le went for broke, getting his feet to the wall at the 50 just ahead, splitting 26.77 over Andrew’s 26.88.  On the way home though, Andrew managed a 28.40 split versus Le’s 28.90, once again lowering the Sectional Record with his winning time of 55.28.  Le touched at 55.67 for silver.  Springfield Aquatics’ Sean Feher touched in 57.09 for bronze.

The women’s 800 freestyle relay victory went to the Rockwood squad of Jordan Stout, Franceska Petrosino, Tennyson Henry and Lauren Votava who combined for 8:25.21.  They were joined by Kansas City Blazers (8:29.32) and Columbia Swim Club (8:38.87) on the medal stand.

I’m ready for the impending AndrewOwnage in Tokyo 2020.

I made this comment about MA during Trials: can we all agree that he’s legit? He was a finalist in the 100 br and 200 IM, and a semifinalist in the 50 free at Trials… There weren’t that many other swimmers who were able to do swim three semis and advance to two finals: Phelps, Lochte, Clary, Dwyer, Jaeger come to mind. Can the doubters back off now, please?

I don’t doubt Micheal Andrew as a swimmer nor do I think many other people who have expressed skepticism do the reason he gets so much hate is the idea of ultra short race pace training sure Michael Andrew is great and that’s the way he trains but I assume he’d be just as good if he trained with some yardage maybe be able to back half a little better because as impressive as 100.1 and his amazing consistency race after race is a 4.6 second spread in a 100 is less impressive.

Sorry the wording in that comment is really messed up

Personally, I think USRPT does more for the back half than the front. Having to maintain technique and tempo when you get tired is the key to a great back half, and that’s a core aspect of a USRPT set. In my mind, the problem isn’t USRPT, it’s just that MA gets a little too ambitious on the front end of his races, and hopefully this is something that he and Peter sort out with time. If he’d back off to a 28.2 or so the first 50, I believe he’d be able to come back in 31.5 or under, for a much prettier 59.high.

I’m not saying aerobic training doesn’t have a place, but I do disagree with… Read more »

He is more than just legit. If he kicks off next season with a string of 1:00.1’s and then drops in a few 59.’s he is going to WC’s with the Stars and Stripes on his Cap. He’s had a very good season.

He’s legit no doubt, but if we look at him non-objectively he’s improved in 3 Olympic events LCM this year:
50 free
100 breast
200 IM

What I’m wondering is has he settled in as a breastroker and 50 specialist?

They were focusing on the 100 breast because it was his best shot for Rio. I imagine they always do some top end speed work during practice, so the 50 makes sense, and I think the 200 IM was just to fill out his schedule (he apparently did very little specific training for it). Now that Trials are over, it seems like they are branching out a bit again, since Michael did the 200 fly and 400 IM a few weeks ago at a local meet.

Next year he will be a world class breaststroker and a formidable 200IMer. The IM will keep his focus on the other strokes, so life will be anything but boring.

Amazingly consistent. He doesn’t really “come off” after his big meet. That’s understandable when he was younger, but at an elite level it is quite unusual.

How can he be so consistent like Gatlin? What’s their secret?

14
-9
Reply
The Screaming Viking!
Reply to  Attila the Hunt

Oooh! I think I know the answer to this one, and it starts with a capital U for Ultra…

Wow 1:00.19 and after trials where he went a pb, he’s coming for that wjr which in my opinion shouldn’t belong to the current holder

Of note, I believe that Coach Cal Bentz of Greater Nebraska Aquatics uses USRPT, so it is interesting to see a USRPT athlete win the 400 Free.

Cal Benz does not work there anymore.

Stay on a roll Michael. You had a terrific Trials.