Americans Nearly Sweep, But for Big Upset by France’s Other Manaudou 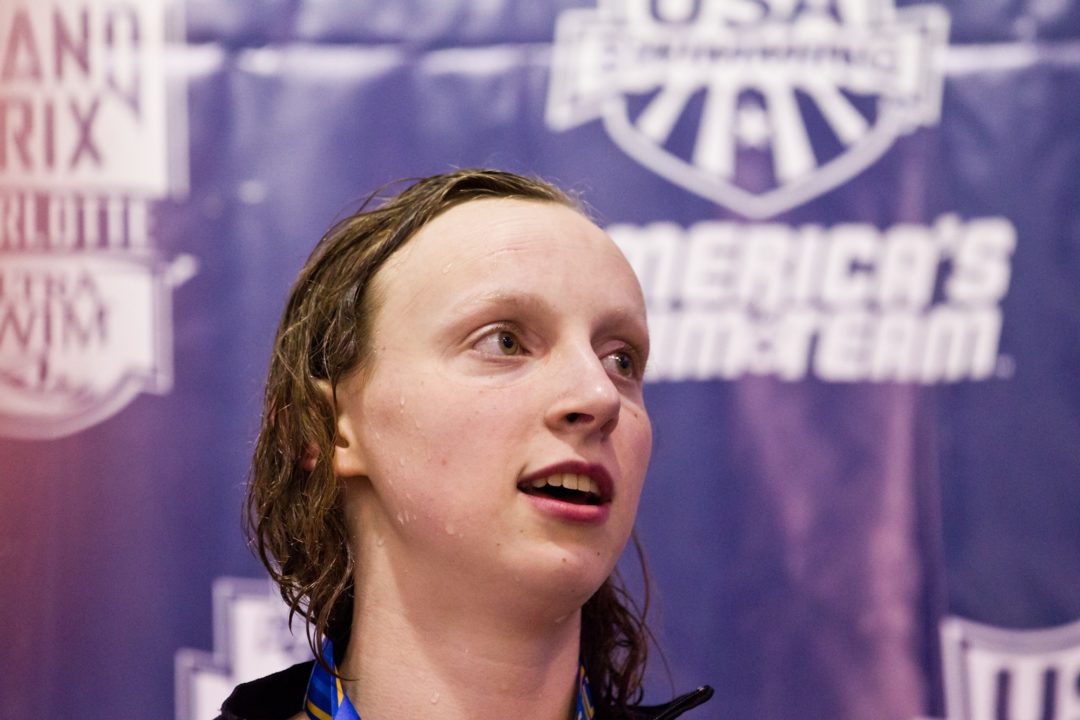 American Katie Ledecky might have upstaged even Phelps and Franklin on Day 7 (Photo Courtesy: ©Tim Binning/TheSwimPictures.com)

The upsets continued to roll in the second-to-last session of the 2012 London Olympics. The session started off with a World Record, but even that was almost forgotten by the time Michael Phelps, Katie Ledecky, and France’s Florent Manaudou finished their performances Friday evening.

When Franklin, known as a hard-charger, made the first turn at the front of the field and ahead of World Record pace, the rout was on. There seems to be no threshold of pain for her in this 200, and she won by nearly two seconds (and broke the World Record by half-a-body-length). She was out in 1:00.50, and came home like a train.

Russia’s Anastasia Zueva continued a sort of odd meet for her country. I don’t think coming in anybody expected her to be this much better in the 200 than the 100, but better she was as she took silver in 2:05.92. American Elizabeth Beisel was good for bronze in 2:06.55.

After 100 years without a men’s threepeat in swimming, who other than Michael Phelps to accomplish the feat twice in two nights. After doing it in the 200 IM final on Thursday, Phelps swam a 51.21, for his 21st Olympic medal.

Though at this stage, in the last individual swim of his career, he’ll take a gold where he can take a gold, the same poor turn and poor finish we saw in the 200 kept this time from being too fast. In fact, he was much better even in the semi-finals.

Still, that can’t take away from the great moment that is the end of an era. With just a finals swim in the 400 medley relay left on Saturday, this will be the last time we’ll hear Phelps announced, see him ascend the block, take his mark, and be the best in the world. Not an insignificant occurrence for the history of our sport.

We saw a tie for silver in this race, the second of this meet, between the young South African Chad le Clos and Russia’s Evgeny Korotyshkin in 51.44.

Phelps’ long-time nemesis Milorad Cavic, likely in his last Olympics as well, went out first at the turn (in 23.57 – quite quick), but at the end of the day will be left tied for 4th in 51.81. He was even with Germany’s Steffen Deibler, as the Germans continue to be shut out of the Olympic medals.

There was a very tightly-packed group behind the medalists; the Netherlands’ Joeri Verlinden (51.82) and the United States’ Tyler McGill (51.88) were 6th and 7th, respectively. Poland’s Konrad Czerniak, who was the silver medalist at Worlds last year, placed 8th in 52.05. That’s a disappointing result from him given that his Olympic spot was locked up from last year.

Katie Ledecky, just 15 years old, might have punctuated this meet with the best swim. Even among all the great swims, all of the World Records, Ledecky’s gold medal in a winning time of 8:14.63 in this women’s 800 free can hang with any of them. Ledecky went out extremely hard, as she’s been wont to do, and at one point was a full body-length ahead of the World Record.

She eventually fell behind that line, but that doesn’t mean she didn’t break records. First went her own 15-16 United States National Age Group Record, when she turned in 4:04.34. It cracked her own 4:05.00 set at the Olympic Trials – meaning that the first half of the race was faster than any swimmer her age has been when they get to stop after 400. She had to keep going.

She would roll to a mark that ranks her 2nd in history, and breaks a historical American Record. Janet Evans’ 8:16.22 had stood since 1989 – over two decades of development, and nobody could beat it until this gutsy 15-year old took it down.

To take this win, Ledecky had to take down quite a formidable opponent. Rebecca Adlington is in the prime of her career, racing in front of a home crowd, and though she didn’t have a great meet, still a favorite to win this race. Ultimately, Adlington would settle for a second bronze in 8:20.32. She had been better than that swim three times this year, but was put out of her rhythm by having to turn on her jets earlier than it seemed like she wanted to thanks to Ledecky’s hard start (to think, a 15-year old forcing the hand of the World Record holder and defending Olympic Champion).

After the race, Adlington emphasized that she didn’t see this as a “failure”. She has been getting a lot of heat domestically for “failing” to defend her titles either in the 400 or 800 freestyles, but she views it as winning two Olympic medals: a feat that ranks among the top in sport in terms of difficulty. Her post-race interviews left her in awe of the young Ledecky as well, saying “She went out so fast. That was an incredible swim from her.”

In between the pair was Spain’s Mireia Belmonte-Garcia, matching her silver from the 200 fly. Her two medals from these Olympics is twice as many as the Spanish women had won in their history coming into London.

In 4th was New Zealand’s Lauren Boyle, wrapping an impressive two-year run for her. That breaks both the New Zealand and Oceania Records, making one of only two continental marks (along with the men’s 200 fly) wrested out of the hands of their neighbors from Australia.

Denmark’s Lotte Friis looked good for a medal until about the 55o, when she began to fade. She ended up touching5th in 8:23.86. The final was rounded out by Boglarka Kapas, Coralie Balmy, and Andreina Pinto.

As they say, anything can happen in the 50 free. Florent Manaudou, younger brother of Laure who has an Olympic crown of her own, topped the men’s 50 free final in a shocking upset. He posted a 21.34 to take in a gold medal. That is the fastest time in the world this year, and breaks the all-time textile best previously held by his own brother-in-law Fred Bousquet, not on this team, at 21.36. Manaudou was given roughly 40:1 odds to win this race, demonstrating just how surprising this result was.

American Cullen Jones reminded the Americans of how clutch he has been for the United States by grabbing his first individual medal in silver with a 21.54. Brazil’s Cesar Cielo, with a poor finish (he was much too long for a sprint race like this) took bronze in 21.59. Cielo has been two-tenths better earlier in the season, showing in a race that involves as much fine-tuning as this one, a year-end best is never a guarantee.

Cielo’s younger teammate Bruno Fratus took another step forward to place 4th in 21.61, another best time for him. At only 23 years old, he could be a big star at his home games in Rio de Janeiro in 2016.

After the rest of what we’ve seen in this session, a semi-final to end could have been a let down. But dutch sprinter Ranomi Kromowidjojo, already with a 100 title, didn’t let that happen. She went out to a 24.07 to take the top seed overall. That’s a personal best for her, and is also one of the 10 fastest performances in history (plus the fastest in textile).

Nobody else, at least yet, showed the ability to hang with her in this all-out dash. If anyone will, it would be Aleksandra Herasimenia, who is the 2nd seed in 24.45. The Belarusian showed in the 100 that she can get off of the blocks with anybody. Kromowidjojo’s teammate Marleen Veldhuis is the 3rd seed in 24.50.

The big surprise is Sweden’s Therese Alshammar making the final 8th in 24.71. Under normal circumstances, that wouldn’t be much of an upset, but considering she’s scratched every other race while battling a pinched nerve in her neck it becomes one. Perhaps she’s a bit fresher than much of her competition.

I’m going to guess the same except:
50 free: Jones! LOL! The best night for USA in recent Olympic history!

Hey! I was almost right! LOL!

I Think Adlington will try to save up the swimming for GBR… I know they have a medal.. but no Gold?!

waking up each night at 1:30 am is not good for my health

It is shocking that Hocking missed out on final.

a medal would be amazing for Coventry.

Simmonds out fast, and so is franklin

Franklin a body length at the 100.