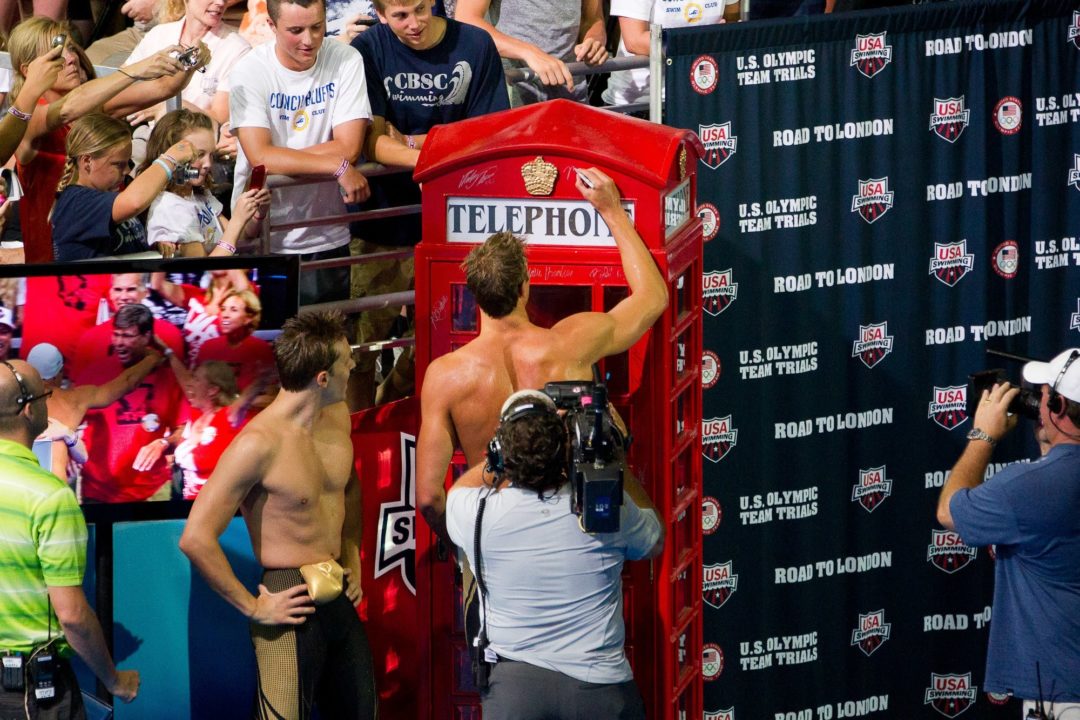 Before their stop in London, the Americans will make a stop in Vichy, France (Photo Courtesy: ©Tim Binning/TheSwimPictures.com)

Today, July 13th, the 2012 U.S. Olympic swim team will say goodbye to their gracious hosts in Tennessee and fly to Paris. They will then train in Vichy, France until taking the short trek across the English Channel to London on July 23rd. This 10-day training camp will be a continuation of the team’s last minute preparations and will give the swimmers an opportunity to adjust their body clocks for London-time.

Location of the Americans’ pre-Olympic training camp in Vichy, south of Paris

A good rule-of-thumb for travel experts is allowing one day of adjustment for each time zone shifted. There is a 5 time zone difference between Knoxville and London, so this early move should give the American athletes ample time to adjust.

Meanwhile, a large group of Australians, who have a 9-hour difference from the East Coast of their country (Sydney time) have headed over even earlier to assure that they have even more time to adjust. Whereas at last year’s World Championships in Shanghai and the 2008 Olympics in Beijing they had a shorter journey, they’re now faced with one of the longer treks among major medal-contending nations.

Swimmers confirmed to be in Spain already include Eamon Sullivan, Matthew Targett, Jessicah Schipper, Libby Trickett, Tessa Wallace, David McKeon, and Jarrod Poort.  They are training at the Centre of Calella Crol, alongside large portions of the Japanese, Swedish, and Russian Olympic contingents. The Swedes and Russians are likely escaping their colder temps, while the Japanese (including the swimmers who were at the recent Sette Colli Trophy in Italy) are in a similar situation as the Australians.

Another Australian squad, the one from St. Peter’s Western that is lead by Michael Bohl, has already been in Montpellier, France for a week. That includes Stephanie Rice, Leisel Jones, Bronte Barratt, and Tae Hwan Park.

(Thanks to aswimfan for contributing to this report).

And Michael Bohl-swimmers (Rice, Tae-Hwan, Napoleon, Nay, Jones, Barratt, etc) have been in Montpellier, France, for almost a week now, with Rice posted photos of her sun-tanning, which I am sure are appreciated by her fans, if not by aussie media.

It has been sais that the athlete who can document their Olympics the best via twitter etc will come out the biggest winner.

That bikini shot was indeed a stroke of genius. She gained 16,000+ new followers right after the media made a big fuss.
Rice is among the best tweeting swimmers that I know.

Are you talking about this? Because seems like she’s not showing off too much 🙂

Yes, and I was joking/being sarcastic with that.

Yeah, i saw some of her pics…Rice really knows how to enslave her fans.Nice girl.I will be rooting for her at Olympics.

Oh yeah I don’t back any swimmer over another (unless I think someone is cooked ) but I’d like to see Steph win to FU to the Australian media.

But she must be feeling good w/ranked 1 & 4 on a trials time 3 months out from shoulder surgery . She has that dangerous look of a winner about her.

But all 400 imers are winners in my book. Best of health to you all .

Has anyone read this ESPN article with comments from Lochte, Jones, Shanteau etc…swimmers seem to be well represented as Beard & Meichtry are also quoted: http://espn.go.com/olympics/summer/2012/story/_/id/8133052/athletes-spill-details-dirty-secrets-olympic-village-espn-magazine

Did you saw the comments in that article?Hilarious…hahaha

Who was Lochte’s roommate in Athens?