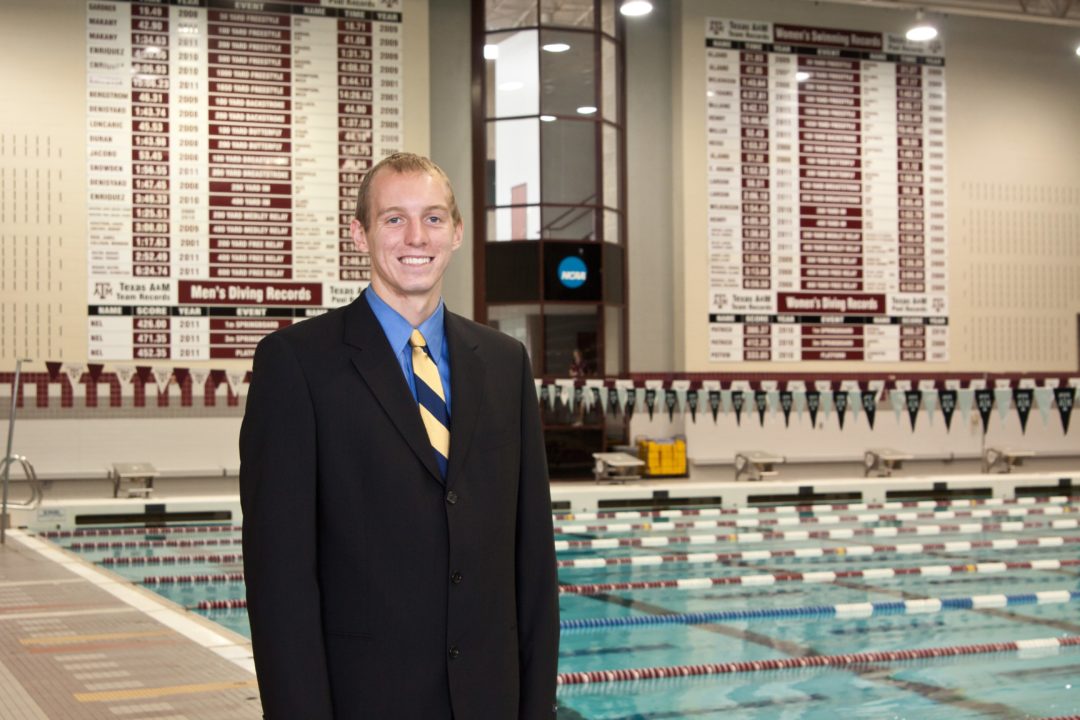 John Dalton and the Texas A&M Aggies have revealed the entirety of their incoming recruiting class (at last). (Photo Courtesy: Texas A&M Athletics)

The A&M men are consistently a mystery through recruiting season; usually, the brunt of their classes are known only when the roster is released in late summer.

After release on Wednesday, though, the relay-minded Aggies have added some significant pieces as they try and fight their way back toward the top 12 this season.

That includes Danish sprinter Emil Gregersen. He comes in with bests of 23.33 and 50.89 in the 50 and 100 freestyles in long course. Those convert to roughly 20-low and 44-low in yards, though to date he’s been better in the long course pool than the short course.

He and Croatian Mateo Muzek are both a bit on the old end for freshmen, but that should work to A&M’s advantage as sprinters need time to age before they hit thier peaks. Muzek has a 52.8 best in the 100 free in long course (46.0 in yards), but unlike Gregersen he has been better in short course thus far.

Muzek is listed as a backstroker as well, though with a 57.5 in long course (50.0 in yards) that will be a project. A&M, though, is very thin in that stroke, and in addition to the signing of Texas State Champ Jacob Wallace, they need to dig to find some help there.

Both of those men have 1:51’s in the 200 free as well; A&M returns all four members of their 11th-place 800 free relay from last season, but Muzek and Gregersen are both capable of 1:36’s in yards, which should make for a great battle for these spots. It could also free up their top sprinter John Dalton for the four shorter relays (though he’s also their top 200 freestyler).

The third international is a true backstroker in Alexandros Theocharidis. He is a World Junior Championship finalist from 2011, and has a long course best of 55.93 in the 100 back. That’s roughly a 47-high in yards. A&M doesn’t have a returning backstroker who broke 50 seconds last season, so that addition will give them a big dose of relief. Despite being only 18, he’s already Greece’s 2nd-best backstroker, so he could be a future Olympian for them.

A&M has also added, as they always do, a slew of domestic freestylers. These guys are rarely the elite echelon coming in, but they’re still extremely talented and one or two of them always develop into individual All-Americans by the time they graduate.

This year, though, at least one probably qualifies for that creme-de-la-creme status. Cory Bolleter from San Antonio is the Texas State Champion in the 50 and 100 free with times of 20.57/45.69, respectively. That 100 free shows especially impressive improvements: as a junior, he was only going 47.4’s; this shows where the patience of A&M coach Jay Holmes paid off. Bolleter was a much hotter prospect after his senior season than at the beginning, where most top sprinters are snatched up.

The Aggies will be as deep as they’ve been in years in those middle distance races next season; they also bring in Mitchell Glander from Kingwood High School in Houston, who has a best of 4:30.97 in the 500, and Hunter Funk who has a 1:39.3 in the 200 free and a 4:32.8 in the 500. With the return of Mexican national Omar Enriquez (4:20.66) from a redshirt season last year, as well as swimmers like Paul-Marc Schweitzer and freshman surprise Luke Shaw, this gives the Aggies a new wrinkle as they head to the SEC.

They’ve also added a huge diving transfer in Ford McLiney, which is significant after the graduation of All-American Grant Nel. McLiney was the ACC runner-up on the 3-meter as a freshman last season, though he didn’t qualify for NCAA’s.

I see they are already following the SEC model of grabbing older international superstars to help their “college” program. Auburn has been doing it for years. What are their majors? Are they “grad” students? What are their ages?

according to swimrankings, they’re 18 and 19… heaven forbid. this isn’t the ncaa of 10 years ago, there is a strict academic schedule for both domestic and international guys to follow.