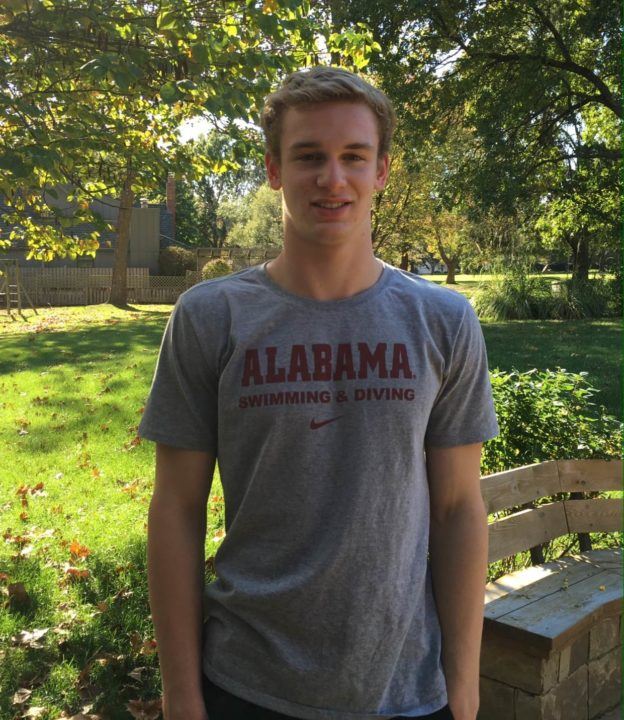 Kansas state high school record-holder Sam Disette has made a verbal commitment to the University of Alabama for 2017-18. Current photo via Sam Disette

Kansas state high school record-holder Sam Disette has made a verbal commitment to the University of Alabama for 2017-18.

“I decided to commit to the University of Alabama, because the team gave me the strong feel of family. While watching one of their practices, the swimmers were pushing each other on as they finished their set. Not to mention, their unbelievable coaching staff. They not only coach to be the best in the pool, but to be the best in the classroom as well. The University of Alabama has so much to offer, and I’m so happy I will be a part of the Tide!”

Disette is a senior at Blue Valley North High School in Overland Park, Kansas. He won both the sprint freestyle events at the 2016 Kansas 6A Boys State Swimming & Diving Championships, breaking the state record in the 50 free with his prelim swim of 20.67. He won the event in 20.71, then followed up with a victory in the 100 free with 46.41. Disette also anchored both freestyle relays, adding another pair of state titles to his portfolio and thus earning The Star’s All-Metro Kansas boys swimmer of the year honors.

Disette swims year-round for Kansas City Swim Academy. He is an Olympic Trials qualifier in the 50m free, and finished third in the event, and second in the 50m fly, at the 2016 NCSA Summer Swimming Championships. His best SCY times are:

Disette will join a growing list of impressive verbal commits for the University of Alabama’s class of 2021: Alex Robinson, Andrey Tretyakov, Christian Strycker, and Michael Burris.

Not only an amazing talent in the pool, but a young man of great character and sportsmanship. Alabama is blessed to have him!

We are so thrilled for you Sam!! Roll Tide