Aggies Defeat Rice on the Road 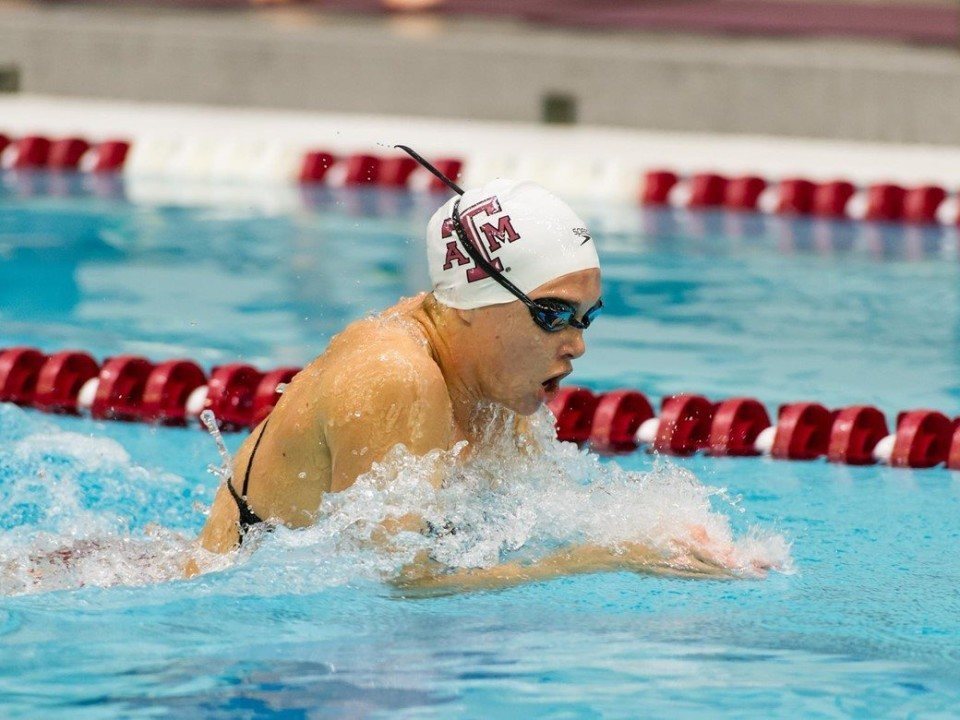 The Rice Owls hosted the Texas A&M Aggies for a dual meet in Houston today where the Aggies won 160-100.... Current photo via Aggie Athletics

The Rice Owls hosted the Texas A&M Aggies for a dual meet in Houston today where the Aggies won 160-100.

The Aggies, who had the fasted time in all but one event contested (though exhibitions did factor into scoring at the end of the meet) started off strong, taking the top two places in the 200 medley relay. The team of Beryl Gastaldello, Jorie Caneta, Sarah Gibson, and  Lexie Lupton finished almost a full three seconds ahead of the second place Aggie “B” team.

The Rice Owls received their first and only true individual event win in the 100 fly where Kiley Beall won in 56.77. Two weeks ago at the Phill Hansel invite, Beall earned a provisional NCAA cut. Lupton and McKenzie rounded out the top three. The Owls went on to take top point earning honors in the 400 IM, with Kaitlyn Swinney, Huston, and Marita Sailor took the top three spots. Swinney’s time in the 400 IM (4:19.86) was the fastest that an Owl has ever been in their home pool. In the 200 free relay, exhibitions gave Rice the top three point spots (however, based on time alone, the Aggies would have been first and third).

Below is an interview with Rice’s head coach Seth Huston. He acknowledges the performances of Caldwell, Swinney, McKenzie and Beall’s stand out performances.

The Rice swimmers will next enter a break from competition while taking their final exams of the semester, but return to action on Dec. 18. The Owls compete at the annual Incarnate Word University Holiday Invitational, a three-day, multi-team meet in San Antonio. The Aggies have the rest of this semester off. They’ll host Georgia and SMU on January 8th and 9th, respectively.