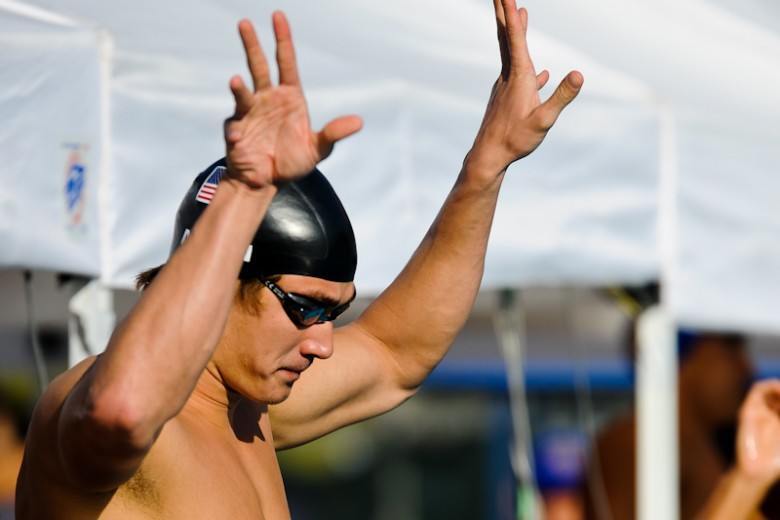 Nathan Adrian crunched the field, and Ashley Steenvoorden had a great race with Chloe Sutton in the 400. (Photo Courtesy: Melissa Lundie)

Night two of the 2012 Fran Crippen Memorial Swim Meet of Champions continued to roar after a great first day on Thursday. Just about everybody who’s anybody in the state of California (and beyond) shows up for this meet; both for the high-level competition as well as to remember a man who is revered by all of those who knew him: Fran Crippen.

A lot of swimmers, specifically those who aren’t in college and didn’t go to Indianapolis, seem to be giving this meet a bit of rest; using it as a final tuneup before lining up for the Olympic Trials.

The second night of competition kicked off with a blistering 100 free swim from Trojan’s Jessica Hardy in the 100 free. She took the victory in 54.45. That’s easily her best time of 2012, and is faster even than she was at Winter Nationals in December.

At this time last year, Hardy was in Brazil tearing-up the Maria Lenk Trophy; she (much like we saw from Chloe Sutton on Thursday night) seems to be right on schedule, though she’s similarly hoping for a more productive end to the season.

Behind her was a slew of Cal swimmers, headed by Liv Jensen in 55.72. For all of her success in NCAA swimming, Jensen still hasn’t earned a ton of recognition in long course. But between this meet and the Indy Grand Prix, she’s now posted the three fastest times in her career in the month since she exhausted her college eligibility. She could be in the mix at the Olympic Trials too.

Other big-name college swimmers in this race include USC’s Kasey Carlson, who was 7th in 57.87; and Stanford’s Felicia Lee was 8th in 58.13.

After coming in as the second seed behind Nathan Adrian in the morning prelims of this men’s 100 free, Ricky Berens felt positive about the final. His post-race Tweets indicate that he wasn’t happy about the outcome, however.

Nathan Adrian was strong with his win in 48.54. That’s his best time of the year and bumps him into the world’s top-10. He and training partner Graeme Moore had vastly different experiences on this day of racing; Moore at home in South Africa at his Olympic Trials had a rough swim in the 100 free, and Adrian has to be pleased with this time.

But Berens was pushing hard in this race, maybe too hard, and swam only a 49.68. His post-race Tweet tells the whole story: “Well that didn’t go as planned. Swimming is a crazy sport. Sometimes the harder you try the worse it feels and slower you go.”

Cal’s Will Copeland was 3rd in 50.72, with Dominik Meichtry in 3rd in 51.15. Former UCSB swimmer Chris Peterson was 5th in 51.38; that’s the fastest he’s ever been outside of last year’s Summer Nationals.

The fastest high-school swimmer was Kyle Gornay, a 15-year old who won the Bonus Final in 52.30. He was a touch faster at the Austin Grand Prix, but that is the third-fastest swim by a 15-and-under American this season.

Katinka Hosszu probably has a really, really long winning streak in the 200 fly. I don’t know how long it is, but she won it here, she won it at the Indianapolis Grand Prix; NCAA’s and Pac-12’s as well. That win-streak will probably be tested at the upcoming Santa Clara Grand Prix, but for now she’s really good. She swam a 2:09.79 in this race (finally showing some rebuild of the yardage); though I don’t think that this 200 fly is where her money’s at in London.

Katinka Hosszu took a back-to-back race, this time in the 200 back with a 2:13.50. That’s the best time of her career, and surprisingly fast, though she doesn’t swim this race a whole lot. She had a great back-half, not surprisingly, with a 1:07.05 on the back-half.

Like Hosszu, Tyler Clary pulled an outstanding 200 fly/200 back back-to-back double; his times were probably even more impressive than hers. He kicked off with a 1:58.1 in the 200 fly, which just about matches his swim from Indianapolis. What he followed that up with in the 200 back, however, was what really wow’ed the crowd. He won that race as well in 1:57.63 – which is the #6 time in the world this year.

As good as those times were on back-to-back swims, he actually conquered it even better last year – about a second faster on each. The shoulder injury he dealt with at the end of 2011 may have shifted his time table a bit for the year.

This was a barn-burner of a race that should play out similarly in Omaha (with a few more big names thrown in). Chloe Sutton dominated the 800 free in a tech-suit on Thursday, but back in more traditional attire, and in the shorter race, this battle with Ashley Steenvoorden was expected to be closer, and it was. The pair finished just .02 seconds apart, with Steenvoorden winning in 4:10.08, as compared to Sutton’s 4:10.10.

Still, even unsuited, Sutton was feeling as though she should’ve done better after the 8:26 in the 800 from the night before. “Amazing what a suit can do. Last night was so easy and I did pretty well, today was a completely different story,” she said after the race. “I wasn’t very happy with the results. I had higher expectations coming off of last night. Still fun racing. I cant wait to have it all come together in Omaha. ”

If you cobbled together the 8 best lengths from that 800, you get about a 4:10.5, as a comparison; that’s a big endorsement for the suit she was wearing last night, as she’s saying that Mission Viejo didn’t rest for this meet. The Nadadores just returned home from the Olympic Training Center on Monday, and had normal practices until Thursday (Sutton *only* swam 4500 meters the morning of her 8:26.).

Now for Steenvoorden, to give the winner the focus she deserves, this was actually the third-best time of her career. I think it was pretty clear that she was training solidly through NCAA’s, but she’s only been faster in this race at last summer’s Long Course Nationals, where she took the title.

FAST teammates Matt McLean and Michael Klueh are having very different peak-and-valley cycles to their times this season, with there being no obvious reason for the differences. Klueh had been a model of consistency up until this meet, hovering at 50’s and 51’s. But here he slipped to a 3:53.09 in the finals: that’s his slowest finals time of the season.

McLean didn’t beat the world with his swim, but the 3:51.56 he posted for the win is a good time for him at this point of the year.

This is likely, at least partially, an effect of the streamlined training group at FAST since a big group made moves earlier this year. Athletes are able to receive a bit more personalized cycles that fit their more subtle performance preferences, and Klueh usually trains between 6,000 and 10,000 more meters per week than the rest of the distance group.

I can’t remember if I read this because of the Nathan Adrian picture or the Golden Gopher mention. Don’t care. Love both.

I think we can be optimistic about Adrian in the 100 Free. I think he will surprise the world at trials. Magnussen is swimming great but we’ve seen many great ones go down trying to achieve Olympic gold.