ACC Men’s Diving: Where Do the Teams Stand after First 3 Events of 2021 Champs 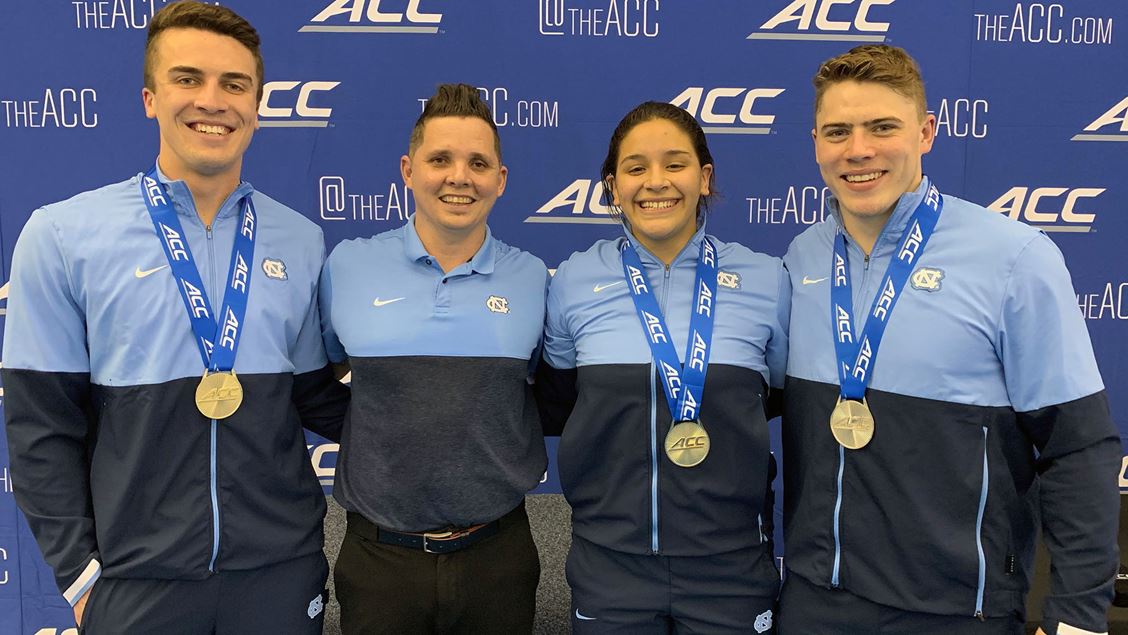 The Carolina men cleaned up in the diving portion of the ACC Swimming & Diving Championships last week, leading the way through 3 events. Current photo via UNC Athletics

The Queens University of Charlotte Royals are in a strong position to win their sixth consecutive NCAA Division II Women’s team title.

The diving portion of the ACC Men’s Swimming & Diving Championships were held last week along with the women’s swimming & diving competition in Greensboro.

While this is a new format for some conferences, like the SEC, the ACC has always operated this way, giving a clue-in to the fortunes of the teams before the competition starts

The top scorers in the diving portion of the meet are not expected to contend for the team title this week.

The UNC men only graduated 41 individual points from last year’s meet, and with a big diving boost, they have an opportunity to move up in the rankings this year. That effort was aided by incoming transfer Anton Down-Jenkins, who was named the Diver of the Meet after sweeping the springboard events.

Miami we know isn’t in the team battle, because their 207 points are all they’ll score – the school doesn’t sponsor a men’s swimming team.

Among the front-runners, Virginia Tech and Louisville led the diving scoring. NC State held-serve to lead-in to the swimming portion of the meet, where on paper they have the best swimming group.

The outlier here is the Virginia men, who scored 0 points with just 1 diver entered in the meet. The ACC format allows teams to bring up to 21 competitors, with a maximum of 18 competitors being swimmers, and divers counting as 1 competitor. That means there’s no real incentive to bringing fewer than 3 divers, though UNC opted to bring 4 divers.

Only UNC and Miami brought more than 3 divers.

Virginia scored 116 diving points last season, so they’ll start in a hole if they want to win the title over the 6-time defending champions from NC State. More significantly, if the meet is a battle for 2nd place, they’ll have an even bigger hole against the Louisville men.

The swimming portion of the meet begins on Wednesday.

What are the rules concerning athletes entering as both a swimmer and a diver? I know Ross Dant could score some big points at diving as well – not sure if Holloway looked into entering him as a dual-sport athlete.

NC State should make up that gap, as they always do, after the first day of individual events. Louisville and Virginia Tech are set up very good, though. If either team goes crazy, they may have a fighting chance to stay ahead of NC State going into the last two days. Virginia took probably the fattest L of 2021 not taking two more divers… they must be pretty confident in their squad they are bringing, as they’ll have a good fight catching the three teams mentioned above.

That in itself is weird because its not like desorbo is still in transition years. Hes had time to establish the team from people he recruited. So either the diving scene is problematic or theyve all but resigned having any mens divers.

Virginia does have 3 divers on their roster. No information why the other two didn’t dive at ACCs.

Also uva scored 160 less than NC state last year and that’s with a 116 diving points. I don’t think there’s a shot they can compete for top 3 this year

I don’t think UVA is going to win.

But no shot that they can compete for top 3? I disagree with that statement.

Just looking at the scores from last year with Louisville and VT and uva only scored 191 more than 4th place and that was with a 116 diving points and now they have zero. I guess to say no shot was a strong statement but I feel like they will fall out of top 3