A Rare Feat: NCAA & Olympic Champions In The Same Year 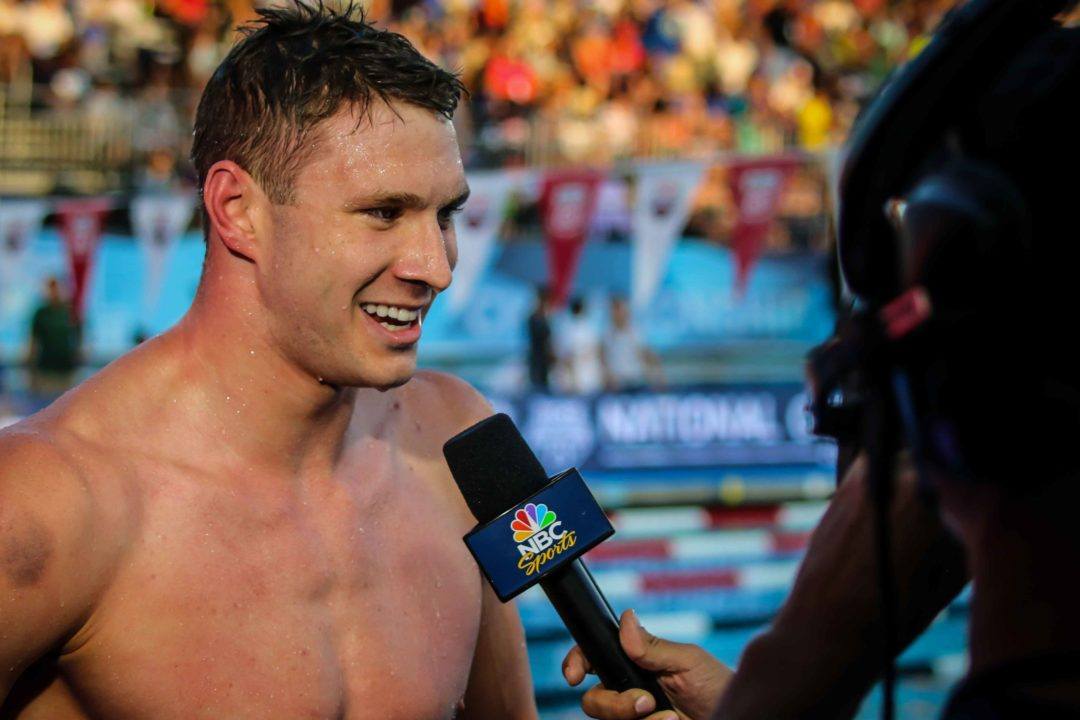 Ryan Murphy was one of three swimmers to win both the Olympic and NCAA titles in the same event in 2016, doing so in the men's 100 and 200 backstroke. Archive photo via Jack Spitser/Spitser Photography

The 2020-21 NCAA season is over. And after the results of the Women’s and Men’s NCAA Division I Championships, we wonder which college swimmers have a shot to make the Olympic team. And even more, which of them can win Olympic gold medals this summer in Tokyo?

This is a harder feat than some of you may think. Instagram’s Swimming Stats page has published all the swimmers who won the NCAA and the Olympics in the same year, in the same individual event.

Speaking of recent Olympics, there were no swimmers who achieved this feat in London 2012. In Beijing 2008, no men, and in Sydney 2000, no women.

Of course, there were some NCAA and Olympic legends who never won their events at the two meets in the same year simply because they didn’t have the chance to do so. Take the case of Missy Franklin and Katie Ledecky, who won their Olympic gold medals years before entering college. If they were college swimmers in 2012 and 2016, respectively, undoubtedly they would make the list.

There were those who won NCAA titles, but managed to reach their peak and win the Olympic gold medal years later, such as Dana Vollmer, Katinka Hosszu, Nathan Adrian, Matt Biondi, Matt Grevers, Ryan Lochte, Mel Stewart, and many others.

As we can see, it takes more than being a fantastic swimmer to win the NCAA and the Olympic titles in the same year. It’s a combination of reaching your peak while still in college and, of course, having the opportunity to compete at the Olympics during this period. History shows that this is a feat for a certain few.

Which 2021 NCAA Champions have the best chance to achieve this feat next summer? Two strong candidates are:

Maggie MacNeil (Michigan, Canada): Already a world champion in the women’s 100 butterfly, she became the first swimmer to crack the 49-second barrier in the 100 yard fly two weeks ago.

Shaine Casas (Texas A&M, USA): He was just 0.02 off Ryan Murphy‘s NCAA record in the men’s 200 backstroke recently. Murphy is the defending Olympic champion in the event, so Casas may have a shot. He can also be competitive in the 200 IM.

Do you think they or another 2021 NCAA winner will repeat their NCAA victories in Tokyo?

This opportunity only comes around once every 4 years.

Maaaaaybe alex Walsh? I see her 200 IM being fast fast this summer and with Katinka hosszu looking was more beatable these days that race is relatively open. I’m not expecting it but it could happen

I think that’s a plausible choice. I’m pretty much right there with you on your supporting statements.

She’s gotta beat out Baker, Cox and Margalis first and then worry about the Iron Lady and everyone else.

Does Kaylee McKeown swim it in Tokyo? That’s a factor.

I think Yui Ohashi (who has been 2:07 and within tenths of an on-form Katinka head-to-head) is the one to beat, especially at a home Olympics, but we’ll have a better idea in a few days.

I don’t think she will, given the conflicts it would have with her other events.

Alex Walsh (and anyone from this year’s freshman class) could be in a unique position to get 2 shots at this achievement. With the Olympics pushed back a year, Class of 2024 will get to try again in 3 years.

Kieran Smith in the 200 free is plausible I guess, but Casas and MacNeil are much better bets.

If anything, we know Detti will get bronze in the 400

No more, no less.

If Sun swims, I think at least two of the medals are as good as taken with Rapsys and Sun. I wouldn’t be confident to put Smith ahead of someone with more international pedigree like Scott.

I think you’ve got a case for Smith’s chances over Casas’. I think both events are pretty wide open but the guys in the 200 back have such high ceilings!

Agree. I highly doubt Casas can touch Rylov–the dude’s been on fire this quad. At best, he’ll be in the mix with Larkin, Xu, Irie, Murphy, and Greenbank for the minor medals.

200 free LCM and SCY are VERY different. Rare to see someone truly elite at both.

Good point. Missy was the rarity.

Finke is a dark horse since he’d have to get past the three fast Europeans, but his 14:12 equates to somewhere around a 14:40, and he’s been a *consistent* 14:12. That puts him within shooting distance.

I will be shocked if any American freestyler besides Dressel makes the individual podium, yards freestyle just doesn’t translate into the big pool.

He had a low 1:43 relay split at one point… I think there will be two Americans under 1:45 this summer. It’s a wide-open race.

Maybe Smith and…who else? Seliskar? Pieroni? I doubt Haas will, he has regressed every year since 2017.

Yes, there are obviously a host of guys whose underwater abilities give them yards times which are far better than their long course times. But watch Finke’s 1650 from NCAAs (it’s available on Youtube): he takes exactly one dolphin kick after each turn, and was gaining on his competitors during the swim portion, not during the turns. So he’s not the kind of underwater animal whose times won’t hold up in the 50 meter pool. I’m not saying he’s going to get past the three Europeans (as I said, he’s a dark horse). But the potential for a 14:40 or better is definitely there.

I’m sorry but I always cringe when someone starts “equating” SCY times to LCM. There are of course people who excel in both (Dressel the most prominent example), but both require such different skillsets they’re pretty much different events

I wonder how much the “taking an Olympic Training Red-Shirt Year” really affects these numbers. Or how much it will affect it in the future?

.04 seconds slower from Phelps in 2004, and Ian Crocker would be on this list.
Also a dolphin kick less from Kitajima and Hansen might be on the list too.

Had Crocker not been sick, he would have owned the 100 fly at the 04 Olympics.

He came back and proved it with that WR in 05

Only event I see him doing (extraordinarily) well in is 4 im. All the others are so much different yards than meters bc of turns.

I think he’d also be exceptional in the 200 fly and the 200/500 free. He broke the 200 fly AR without a full taper, and the 500 free has decent overlap with the 200 LC. Plus, I think that if he really focused on yards, he could’ve figured something decent out with his start and employ more fast-twitch in his training. But, when you completely neglect yards since age 15, those things really aren’t important.