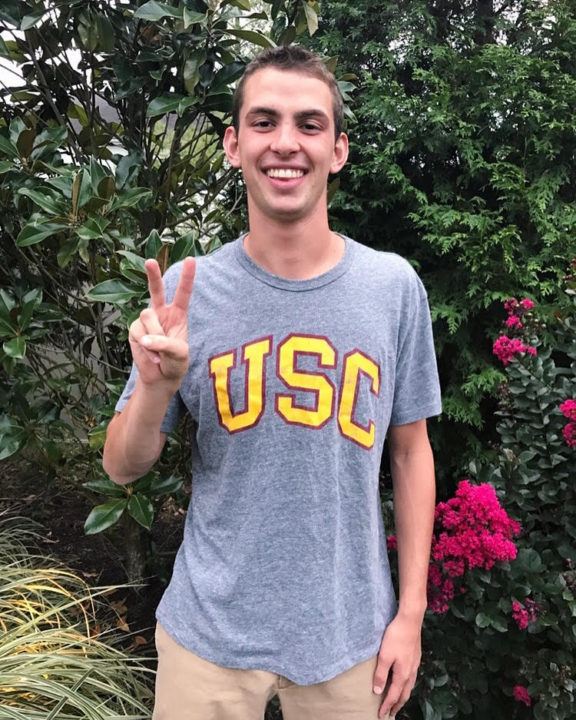 Jake Sannem, the #8 recruit on our top-20 list, has announced his verbal commitment to the USC Trojans for 2017-18. Current photo via Jake Sannem

Sannem told SwimSwam, “I chose USC because it was a perfect combination of everything I was looking for. From the outstanding academics, amazing coaching staff, and awesome team, I know USC will challenge me in and out of the pool to reach my goals. I am so excited to be a part of the trojan family! Fight On!”

He then added, “I hope to see a celebrity or two while I am in LA!”

Jake Sannem of Ambler, Pennsylvania, the number 8 swimmer on the SwimSwam top 20 list of high school boys in the class of 2017, has given a verbal commitment to the University of Southern California for 2017-18. Sannem is a senior at La Salle College High School, and the defending Pennsylvania AAA State Championship in the 500 free (4:19.64). Sannem was also runner-up in the 200 free (1:35.44) at the same meet, and led off La Salle College’s 400 free relay (44.92) and anchored the 200 free relay.

USC has a great tradition of 200/500 freestylers. Sannem already has times that would score in the B finals at Pac-12 Championships; while he’ll just miss overlapping with Reed Malone, Sannem will have a deep training group, led by Pawel Furtek, when he arrives in Los Angeles.

Congrats Jake on committing! Your such a great kid in and out of the pool. Have fun next year!

who the heck cares where this kid chose if its the RIGHT choice for him?? People who are upset he didnt go to stanford are most likely standford swimmers/coaches who are salty he didnt choose their school! Jake is now going to make a great addition to USC and now give the “best 500 swimmers” a run for their money!! Stop talkin trash on an 18 year old (very immature to do in the first place) and just congradulate him like normal people and stop being bullies! congrats to jake and to usc! they got a great kid!!

Congrats to Jake! Great person, great athlete! He’s been excited about USC for a few years now. For those of you wondering, Jake was accepted to Stanford, Harvard, Princeton, Yale, Michigan among others, so, please, don’t worry about the academics. He has a bright future ahead of him, in the water and out!

My son also had those choices. Everyone thought he would choose Stanford and they wanted him ( got a call from the Stanford coach when he chose USC) but there’s something special about USC! Fight on! It’s the “package” – great swim program / coaches & teammates, great academics, urban diversity, fun, great weather. Congrats to Jake!

Jake is a great kid, and his successes in PIAA show his potential-I am sure he he will do well at USC. It is wonderful that he had already gotten accepted to so many Ivys this early in the year, Normally the Ivys only give out “likely” letters rather than true acceptance letters until later in the year.

Ah yes, of course he got accepted to all those schools in September, that makes sense…. you know that you can’t actually get officially accepted into the school until December, right?

I’m so happy you didnt go to those other drab schools! Keep up the great work buddy…. can’t wait to see you at Tokyo! May Yahweh be with you.

Interesting choice. USC’s “deep training group” will include one guy who breaks 4:20 in the 500 freestyle when he shows up. There’s much more depth in Sannem’s events at places like Texas (Haas, Roberts, Smith), NC State (Linker, Ipsen), Stanford (Sweetser, Egan, Shoults, Hirsberger), and Michigan (Ransford, Auobeck). Wonder what Salo offered to turn his attention away from these other places?

8
-10
Reply
Grow Up
Reply to  Cleansport

You’re the worst type of person. Easy to criticize behind a keyboard 🙂

So sad that we missed out on this kid. OI think that this school will be a good fit for this school however DeVry could have been a great opportunity for this fellow.