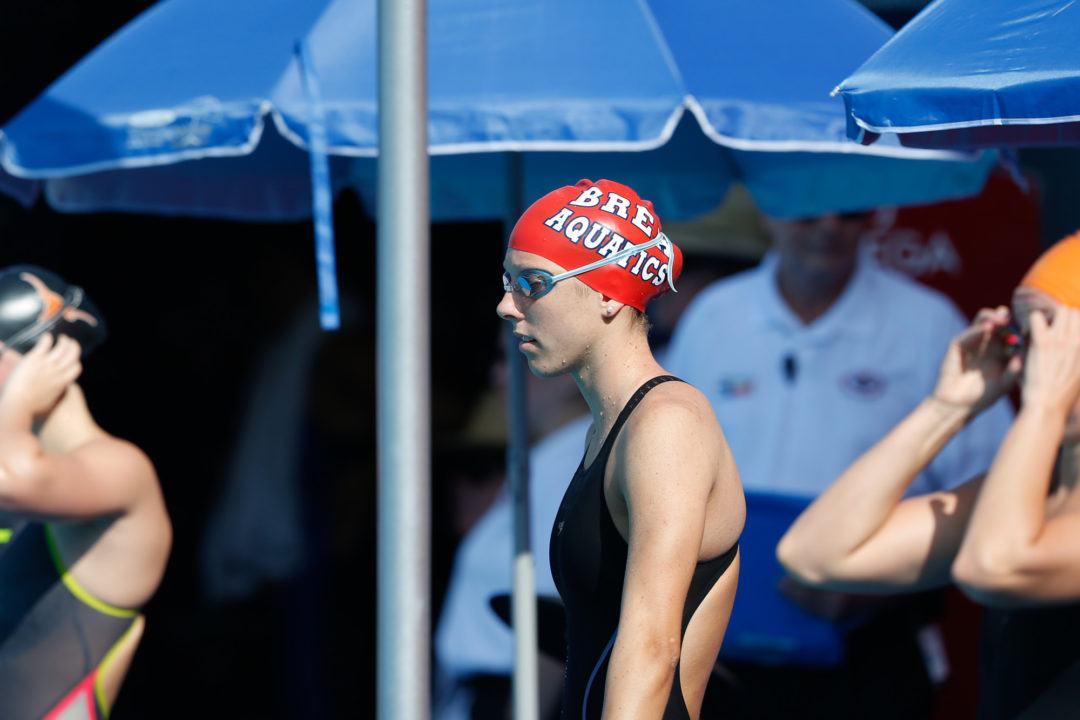 Samantha Pearson, the #18 ranked recruit in the high school class of 2020, has hit Olympic Trials cuts in 4 events since the quarantine has lifted. Archive photo via Tim Binning/TheSwimPictures.com

USA Swimming says that they still haven’t made a decision about what to do with regards to swimmers who hit new Olympic Trials standards in 2021, but hope to have more information by the end of January.

When the Tokyo 2020 Olympic Games, and the corresponding US Olympic Swimming Trials, were postponed by a year because of the ongoing coronavirus pandemic, there was uncertainty as to what would happen with qualifiers for the latter event. The primary balance in play was how to make it fair for those swimmers who were counting on a spring taper meet that never happened to hit their Trials standards with USA Swimming’s desire to keep the meet smaller than in previous years – with a stated goal of around 1200-1400 swimmers.

In April, after USA Swimming put a pause on all sanctioned swim meets, there were (essentially*) 1,213 swimmers qualified for the US Olympic Trials – within USA Swimming’s target range.

* Some swimmers who have hit qualifying standards and who are eligible to represent the US, along with another country, have not necessarily declared a sporting citizenship yet, but this number is correct-enough for any pragmatic purpose).

At that time, the organization decided to take a ‘wait and see’ approach and kept the existing Olympic Trials standards in-tact through at least December 31, 2020.

As that initial deadline approaches, a spokesperson for the organization says that “they will remain as is for the moment.”

“We want to avoid any hasty decisions and continue to try and gather as much information as possible about what Trials may look like in 5.5 months,” the spokesperson said. “We will look to provide current qualifiers, and future qualifiers, more information by the end of January.”

The possibility is in play, of course, that the Olympic Trials will be reduced in size, as we’ve seen happen in countries like Canada, because of the impact of the pandemic, though USA Swimming has not publicly proposed such a reduction in any manner.

While the U.S. Federal Government Secretary of Health and Human Services Alex Azar has said that by April, all Americans who wish to receive the coronavirus vaccine will have access to a first dose (out of two required doses for the currently-approved vaccines), there are no guarantees that by June enough will be vaccinated to hold an event this large. Furthermore, so far, the distribution of vaccines have lagged behind targets nationally.

If the Trials are able to move forward with all swimmers who have qualified, 73 more Americans have added their name to that list since August, when USA Swimming first allowed times to count for national meet qualifying.

That list includes 50 new male qualifiers and 23 new female qualifiers. This brings the total up to 1,288 qualifiers, though we know some of those have opted to not continue training – like Claire Adams and Asia Seidt.

That still leaves USA Swimming within its stated target range, though the trend indicates that if they leave the standards in place until June of next year, they’ll probably exceed 1,400 qualifiers.

Among those on the list of new qualifiers are Daniel Diehl. Diehl set several 13-14 National Age Group Records before aging up late this year, including a 1:36.75 in the 200 yard free, and was 15 when he swam 55.46 in the 100 back in long course. Diehl was unattached at the time, but trains with the Cumberland YMCA.

He is the youngest of the new male qualifiers. The only female younger than him among new qualifiers is 14-year old Levenia Sim of TNT Swimming.

Samantha Pearson, a Stanford commit and the #18-ranked recruit in the high school class of 2020, has hit 4 new Olympic Trials standards since quarantines have lifted. Pearson, who is deferring her enrollment at Stanford and at last check was training with David Marsh’s Team Elite group in Southern California, now has cuts in the 50 free, 100 free, 100 fly, and 200 IM according to USA Swimming’s database.

On the boys’ side, four new qualifiers have broken through with 3 new Trials cuts each: Sam Hoover, Daniel Matheson, Cade Oliver, and Landon Gentry.

Note: the lists below don’t include already-qualified swimmers who hit cut times in new events, or improved previous cuts.

Note: Alexa Reyna of the Westchester Aquatic Club in New York has also hit a US Olympic Trials qualifying standard. A dual citizen of the US and France, she has not yet decided which country she’ll represent internationally.

How about a March Madness hybrid. Top two or three male and female heats per event are automatically at the trials. An additional one or two heats per event qualify into the trials the week or weeks prior. Consider separating these rounds by genders. Survive and advance. Not ideal to taper multiple times, but the top two or three heats are ensured no more than one taper (if needed) to qualify for the team.

I’m not sure of the numbers / timelines based off these heat totals (anyone have the time or desire to crunch the numbers?). Not perfect, but it does give everyone a chance.

USA Swimming is a conflict-ridden mess.

In a normal year, the desire to maximize revenues and publicity for the sport doesn’t impact team selection too significantly.

But this time it’s different. The health of the athletes, coaches, etc should be the priority, not revenue maximization.

Everyone else is SOL.

And to the parents who say, “my kid trained forever to qualify for trials”: it’s an arbitrary time standard, nothing else. At a certain point, meeting that standard, saying you finished 313th in the 50 free, is meaningless.

It is time to consider separate Male and Female Meets

Why didn’t anyone suggest this?
Alright this is the best idea!

If they have to change things dramatically, I think it’s a good starting point.

I appreciate USAS’s wait and see approach. There’s no sense in announcing plans months out when the situation is so fluid.

That said, it really seems like the only responsible decision (at this point in time) is to reduce the number of swimmers invited to the meet. The “but that’s not fair to the swimmers who get cut!” argument carries no water. I bet the families of the nearly 2 million people who have died think it’s not fair they died; people who have lost their jobs, their businesses, their homes probably think their impacts are unfair. This isn’t a capricious decision made on a whim or in a vacuum; we have to adjust to dealing with a worldwide pandemic… Read more »

I think you are probably correct but my vote is to keep the wait and see and do all we can to let them swim as normal….all of them. Look at alternatives and options as needed as we get closer. The distribution of vaccines could change drastically as it gets figured out. I vote with my heart and say let them swim. I use my brain and know it’s still 75/25 against it being normal at best. 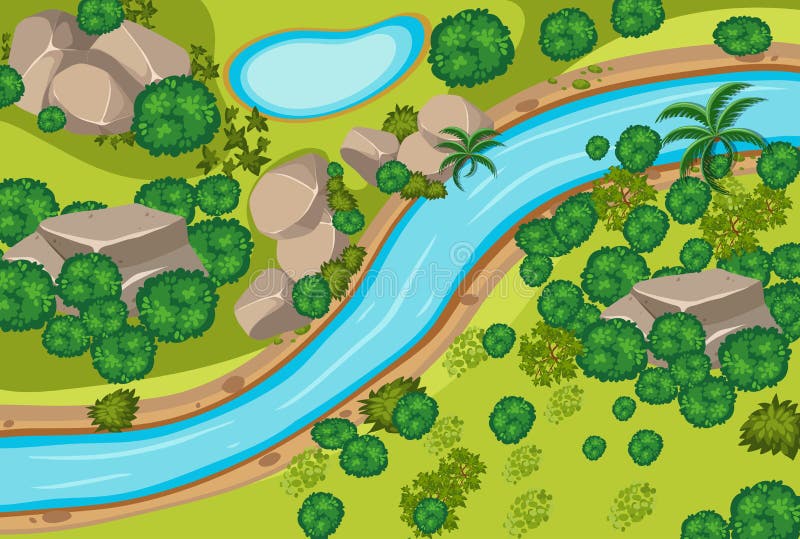 It would be better to move this to an outside venue than to cut the field. So, many kids (my daughter among them) have worked literally their entire lives to get to this point. To cut to the field to 36 would be a travisty. She qualified on the first day at junior nationals as a senior in high school and while she is a better long course swimmer has been training in 25-yard pools since starting college and during the pandemic. But at the same time has been lifting weights in college and is much stronger than she was when she qualified 16 months ago.

Better to split the trials to men and women, and have both outside in… Read more »

Congratulations to you daughter. I totally understand she would be devastated not being able to swim at trials.

I think it’s USA swimming’s job to do what is most safe for everyone, even if it means many will be disappointed. The accomplishment will stand – she qualifies for the Trials. That’s something very few can say.

Depending on the vaccine situation and metrics, a large gathering of people doesn’t seem like it’s in the works right now.