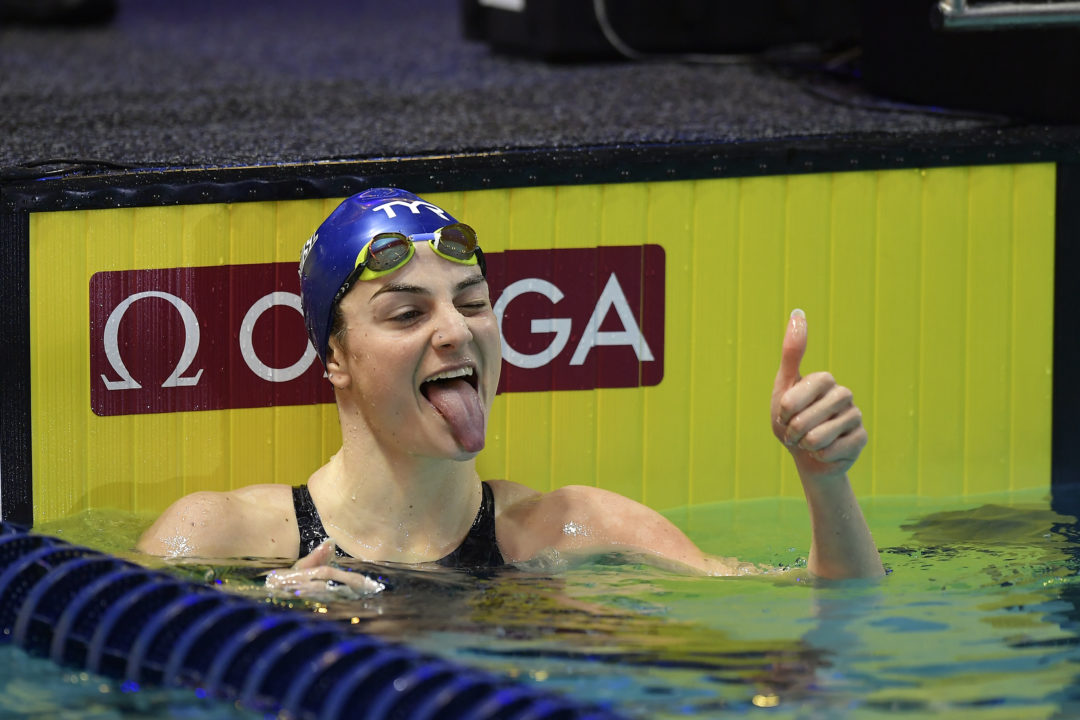 If you had Beryl Gastaldello as the most valuable female swimmer in your office pool for the US Derby meet, then you were the big winner. Current photo via LaPresse - Fabio Ferrari

With Sunday’s conclusion of the US Derby meet, the first 2 teams have been officially eliminated from the 2019 International Swimming League (ISL) season.

The LA Current and Cali Condors on Sunday finalized their tickets to December’s Las Vegas finale, while the DC Trident and New York Breakers concluded their seasons with a riveting 3rd-place battle.

The ISL has brought about a number of dramatic structural and institutional changes to the sport of swimming even after just a few short months of competition. On a smaller-scale view, however, it has changed our perception of what a global superstar in swimming can look like. Athletes who haven’t received much attention for their international careers, including from the ISL itself, have turned into stars in this format.

For others the explanation is more simple: they are very good in short course, and short course meters are now getting more attention than they have in recent memory (as is evidenced by Adam Peaty going from “short course is dead to me” to “all-in” on the ISL and the London Roar).

We knew that Caeleb Dressel would be a huge point scorer, which he’s proven with 2 MVP trophies already. We knew that Tom Shields, with underwaters that were once arguably the best in the world, would be big, in spite of the up-and-down ride he’s had in long course. Lilly King’s breaststrokes and Melanie Margalis’ versatility were bound to pay off big in this format, and the Michael Andrew that we saw in College Park is the Michael Andrew we’ve been expecting all along.

But below, we look at a list of 5 swimmers from American teams who have been brilliant for their teams in this format and who, at least in periods where the ISL is the dominant force in the sport, must now enter our lexicons as bona fied stars.

Beryl Gastaldello, a French swimmer, had a very good college career at Texas A&M, including owning at one point the fastest 50 yard fly in history. But in 2018, she had both her best year in the pool and her toughest year out of the pool as she grappled with depression and anxiety that led to a significant period of time out of the pool. But now, training with the Texas A&M men’s program and their assistant coach Jason Calanog, Gastaldello is back, with a vengeance. She proved in Maryland that she is the best female sprinter on the U.S. side of the bracket by winning the skins race and finishing 2nd in MVP scoring behind only Caeleb Dressel.

She’s capable of winning the 50 or 100 meter versions of backstroke, butterfly, or freestyle at any given meet, and handed multi-race schedules as well as anyone – her 24.46 in the skins final was actually faster than she went 3 minutes earlier in the semi-final. She’s got a big start and big turns, and she said in an interview on Sunday that she thrives on racing even though she hates training. Her road will be tougher in Vegas – there’s a lot more depth in her events among the European teams, and she’ll be coming off 3-straight weekends of training and a trans-Atlantic flight – but she says she’ll rest for the meet. and be ready to take on swimmers like the Campbell sisters, Ranomi Kromowidjojo, and Sarah Sjostrom. If she can come out of that field and make the skins final in the championship event, then the Current might just have a chance of pulling off an improbable league title.

The Greek swimmer Andreas Vazaios was a 2-time national champion in the 200 fly at NC State, but among all events, that’s the one that most rarely translates to international success. In fact, the last NCAA champion in the 200 fly to win a medal of any color in that event at the Olympics was Stephen Parry of Florida State, who won the NCAA title in 1997 and Olympic bronze medal in 2004. Before that, it was SwimSwam co-founder Mel Stewart, who was the 1989 and 1991 NCAA Champion and the 1992 Olympic gold medalist. That’s not a great track record.

Both in ISL, he was maybe one of the most underrated signings of the season, especially for the 3rd-place Trident. He won the 200 IM in both Naples and College Park, was in the top 3 in the 200 fly in all of the meets, and was 14th in the MVP standings in College Park. If I had told you pre-season that at the US Derby meet, that Andreas Vazaios would be the 7th-most-valuable male swimmer, you wouldn’t have believed me.

Shoutout to the DC Trident. They didn’t have quite enough superstars to make the Vegas final, but they did as well as anybody at finding swimmers who are growing into stars in the ISL format. Siobhan Haughey was as valuable to her team this weekend as anyone was as the Trident achieved their “3rd is 1st” goal. Heading into the ‘skins’ event, the conversation in SwimSwam land was “who are the Trident going to get skins points from that will hold off Michael Andrew and Pernille Blume?”

The answer came in the form of Haughey. Who not only made the semi-final, which wasn’t a big surprise, but pushed past Blume into the final. That .04 second difference was the difference between the Trident and the Breakers.

Haughey was 4th at the World Championships in the 200 free last summer, so she isn’t a total underdog, but even as one of the best 200 IMers in the NCAA in her career at Michigan, I don’t think anyone expected her to be this good in this many races. She was 4th in MVP scoring in Maryland, and 3rd in “actual points” scoring individually. She breaks multiple Hong Kong records at every meet and seems to get faster every time she swims. She’s been good in races we didn’t expect – including a 3rd-place finish in the 50 breaststroke in Maryland. And she was clutch. Oh so very clutch. Clutchness counts.

He didn’t make this list, but Ian Finnerty of the DC Trident could qualify here as well, though with what he’s done recently in the NCAA, that shouldn’t really be any kind of a surprise.

On a team with Molly Hannis and Lilly King, it was easy to overlook the 21-year old Canadian Kelsey Wog. This offseason, however, she’s going to have a lot of suitors if she chooses to chase a bigger salary on the open market.

She has pushed Olympic gold medalist and Cali teammate Lilly King in the 200 breaststroke at both of her meets (Indy and Maryland) this season. She’s been a star in the 200 IM as well, including a 2nd-place finish in the 200 IM in Maryland (again behind a teammate, Melanie Margalis).

She had a great long course season as well, and given the number of best times that she’s swum, this might simply be the front-end of her big international breakthrough. She was 6th in the 200 breast at Worlds last year, but has been so much more than that for the Condors this season. Heck, she split 53.16 on the mixed 400 free relay on Sunday at the end of a long meet. That’s almost as fast as her teammate Mallory Comerford, who split 53.11, who is a recent American Record holder in the 100 free. With the roster limits imposed at these meets, having a breaststroker who can also contribute to free relays at an elite level is an incredible value.

It’s only a matter of time before Seliskar has his international breakthrough, but for Team USA at the World Championships, he missed the final in the 200 free with a 15th-place finish.

In the ISL format, though, Seliskar will be an introduction to the international audience in a way that we’ve known about him in the United States for years. In yards, nobody can swim as many races 200 yards and longer as well as he can. He’s been handling that schedule well, too: in both Lewisville and Budapest, he won the 200 IM shortly after racing the 400 free at the end of the prior session. With Chase Kalisz back on the roster, they didn’t need him to do that double in Maryland, but if, post-Tokyo, he really wants to explore his range, he could be winning MVP awards next season.

Trident is looking like they could be on the come up these next few years, although I may be a lil biased

For sure. I think a lot of teams have learned a lot about how to recruit. The biggest question I have is how active the ‘free agent’ market will be – are athletes just going to re-sign with their same teams? Or are they going to take to the open market?

I know one GM said that he hoped that there would be some protection for a certain number of athletes on each roster – simply because it’s too much work to recruit a full 40-swimmer roster every season. Maybe they’ll add multi-year contracts next season? I think that’s what they need to really make this league more interesting in the long term.

I would hope that they add that after next season. I think there needs to be some level of redraft

I am also interested if the “studs” participate after the Olympics or take a break!

This is what is great about ISL. Fans get to see the best of a wide variety of athletes they wouldn’t get to see that often elsewhere and it offers to showcase different swimmers each meet whereas in FINA World Cup it’s just the same people and the same results every single time.

Siobhan was a very versatile age group swimmer that competed in many Australia age champs and placed well. Her depth back then was something to signal good things to come

That competed, or who competed?

Which… obviously. She’s a machine! 😀

Thank you for enlightening me.