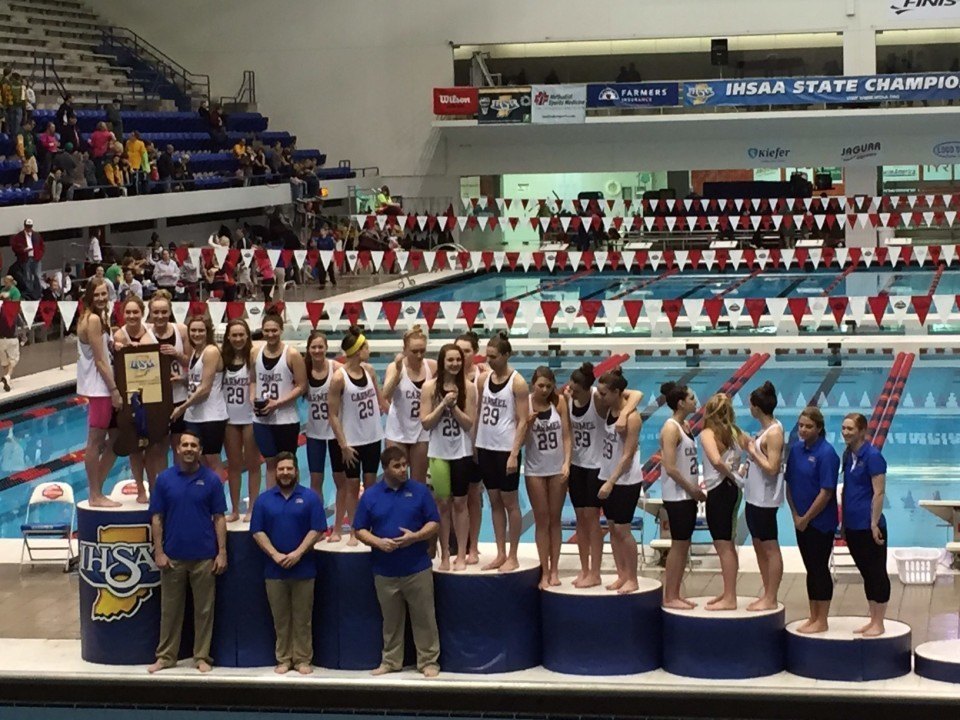 Carmel High School swam over the rest of the state to win their 29th consecutive state title. After two full... Current photo via Todd Adams

Carmel High School swam over the rest of the state to win their 29th consecutive state title. After two full days of swimming, 4 national high school relay record, 2 NAG records, and 14 state records fell in swimming alone, with another coming in diving to make 15 total records. Carmel swimmers broke every record except for one of the state swimming records.

They are the only girls team in history to break all three national relay records in one meet, and they have done it two years in a row. They also won every event except the 200 IM and the 100 breaststroke. Those events were won by Reitz’ Lilly King. She was the recipient of the IHSAA’s mental attitude award and the $1000 scholarship that comes with it. She will be swimming for Indiana University next year.

The second day of the Indiana high school girls state championships started off as exciting as it possibly gets. Zionsville and Jay County tied at the finish to win the B-final of the 200 medley relay with a time of 1:48.17. Penn was just behind them for third in the heat, 11th overall, at 1:48.24.

Carmel High School made history again by lowering their national age group record from last night, winning the event with their time of 1:39.25. In addition to being the first HS relay team under 1:40, they also broke the 15-18 NAG record held by SwimMAC Carolina at 1:39.27. Their relay would also be the 20th fastest relay in the NCAA so far this year.

Take a look at Carmel’s splits:

Morgan Grout picked up 9th place points for Carmel by winning the B final of the 200 freestyle with her time of 1:50.22. Avon’s Natalie Myers finished second in the heat at 1:50.80.

Carmel High School’s Claire Adams led her teammate Emma Nordin to a 1-2 finish in the 200 freestyle. Adams posted the fastest time of the session at 1:45.78, and Nordin finished second at 1:47.63. The pair held off Crown Point’s Hannah Kukurugya, the third place finisher with her time of 1:48.25.

Aly Tetzloff went out after the first 100, splitting under the state record pace and distancing herself from the rest of the field. She wasn’t able to hold off Lilly King‘s charging breaststroke, however. King (FJ Reitz) split a 33.29 during the breaststroke leg of the 200 IM to pull in the field and win the final with her time of 1:59.24. Carmel’s Sammie Burchill added a second place finish in the event with her time of 1:59.66. Taite Kitchel from Zionsville finished third with her time of 2:00.49. Crown Point’s Aly Tetzloff fell off slightly in the back half of her race, but held on for a fourth place finish at 2:00.82

Carmel High School won their third event of the night in the women’s 50 freestyle. Amy Bilquist tied her state record with a time of 22.15. That time will stand as the 13th fastest 17-18 time in USA Swimming history. Bilquist’s teammate, Kendall Smith, finished second with her time of 23.16. Hamilton Southeastern’s Robyn Clevenger added a third place finish with her time of 23.28, and Vanessa Krause from Chesterton was fourth at 23.30.

In an among the madness that was the Carmel High School girls swim team, Brooke Schultz from Hamilton Heights broke the state record in diving with a score of 563.65. Schultz is a Junior national team dive, and over the summer her ad Dale Schultz was named the head diving coach at the University of Florida.

After finishing third in the 50 freestyle, Hamilton Southeastern’s Robyn Clevenger won the b final of the 100 butterfly with her time of 55.15. Ellie Schnautz from Castle was second in the heat at 56.42.

Carmel’s Veronica Burchill lowered her state record with her time of 52.26. That is the 10th state record for Carmel and the 11th of the meet. Burchill is only about a half second off of Beata Nelson‘s National High School record of 51.70. With one more year of high school swimming in front of her, that record is going to be under fire.

Crown Point’s Aly Tetzloff finished second with her time of 53.04 and Chesterton’s Vanessa Krause was third at 53.49.

Crown Point’s Meg Taylor won the B final of the 100 freestyle with her time of 51.81. Chesterton’s Andrea Hanas was second in the heat at 51.89.

Amy Bilquist lead a 1-2-3 sweep for Carmel and also broke the 11th state record for Carmel and the 12th state record of the meet with her time of 48.36. She is still off of Abbey Weitzeil‘s national high school record of 47.82, but she did beat Olympic Champion Missy Franklin’s best time during high school of 48.39. Bilquist’s teammate, Kendall Smith, added another second place finish with her time of 50.63. Carmel’s Trude Rothrock completed the Carmel sweep with a third place time of 50.70. Zionsville’s Kylie Mihok was the fourth place finisher at 50.90.

Carmel High School just broke their second national relay record of the night with a time of 1:30.72. Impressively, they broke this record without the help of their star sprinter, Amy Bilquist. Veronica Burchill lead off with an speedy 22.39, followed by Claire Adams at 22.53, Kendall Smith at 22.77, and Trude Rothrock with a 23.13. This is third national high school record and the 13th state record of the meet.

Chesterton’s Cara Kroeger won the B final of the 100 backstroke with her time of 56.42. Northridge’s Lauren Miller finished second in the heat at 57.27

Claire Adams picked up another individual victory for Carmel High School, winning the event with her time of 52.14. Her time from prelims of 51.99 ranks as the 3rd fastest 15-16 100 backstroke in USA Swimming history. Her teammate, Sammie Burchill, finished second with a time of 54.35. Columbus North’s Grace Haskett finished third with her time of 55.29, and Natalie Mudd from Hamilton Southeastern was fourth at 55.56.

Lilly King is now the only swimmer that isn’t from Carmel to win an individual event at this years championships. King, from FJ Reitz, doubled up after winning the 200 IM earlier, by winning the 100 breaststroke with her time of 59.70. Carmel’s Alex Clarke finished second with her time of 1:03.24, and Fishers’ Lauren Edelman was third at 1:03.32.

The crowd was left speechless after Carmel broke the national record in the 400 freestyle relay by 6 seconds! The team of Veronica Burchill, Claire Adams, Kendall Smith, and Amy Bilquist combined to post a record time of 3:15.38!!! The previous National public high school record was 3:21.20 and the overall record was 3:20.42. That was the fourth national high school record of the meet and the 14th state record of the meet.

Take a look at their splits below:

Since you are only allowed to put in three individual swimmers per event, I wonder if Carmal’s B team would be strong enough to earn second place in the meet. I would think they have other swimmers that attend the high school that could score state points.