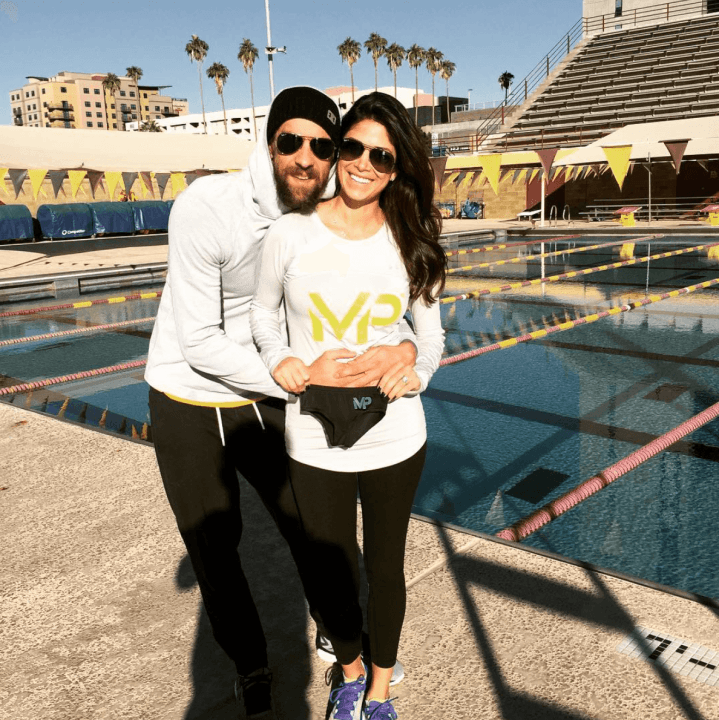 On the count down to the 2016 U.S. Olympic Swimming Trials, there will be many moments worth noting.

Michael Phelps‘ fiancee Nicole Johnson reveals a perfect baby bump in her elegantly fitted navy dress at the 2015 Golden Goggles reports E! Entertainment News. Phelps has walked the Golden Goggles red carpet eleven times, almost always as a headliner of the awards show. This year was special, shared with his fiancee, with whom he is expecting his first child.

Off camera Phelps was super-chill. I caught up with him for a brief moment outside the Diamond Hall (where Goggles was held).  Having a moment with Mr. Swimming is challenging at events. He can’t step away for a minute without fans finding him and requesting photos or autographs.  During our moment, he took fan requests graciously, but he did have one thing to say.  Phelps leaned forward, and in a flat, low tone said, I’m really excited for next year. Doesn’t sound like much, but the way he said it was intimidating. Causal Phelps flipped a switch and suddenly there was edge in that simple sentence.  The last time I felt that level of edge from him–and felt it so abruptly–was at the 2008 Missouri Grand Prix.  If I remember correctly, Phelps swam a 1:53 200 fly. It was a stunning in-season swim before the Beijing Olympics.   That was the same event where we captured the silly video below, having fun with Phelps. He played along being a perfect foil in our attempt at comedy. After we finished I said something about how fast his 2-fly was. He responded with sudden intimidation, that’s what needs to be done in an Olympic year, shook my hand and walked off.

I wonder if Phelps even realizes how intense he comes across at times. I don’t think he does.  It’s probably just an aspect of his character. When he’s hyper-focused–as he clearly is now with Rio on the horizon–that intensity comes through so sharply you feel it.  See the silly video we captured below from the 2008 Missouri Grand Prix:

We all saw it, when Phelps accepted his Golden Goggles award, but I have not seen anyone write about it. So, did you hear it, the personal message to supporters?  From my perspective sitting in the crowd, Phelps message was very personal. He spoke directly to the swimming family. At Goggles, it’s a tight crew, a room full of influencers, leaders in the sport. What I heard from Phelps was that he went through an extremely tough time and he was thankful for those who stood by him.  He said, and I’m paraphrasing, you know who you are.  The message to me, and I may be reading too much into it, was also that some did not stand by him… If I’m reading too much into this, call me out in the comments.  Nevertheless, the speech was heartfelt. When you’re vulnerable, you do remember your friends, the ones who love you through the good and the bad.  See the acceptance speech here:

Not a Phelps moment, but you could visibly see Phelps’ support of his teammate Allison Schmitt as she accepted her award.  I was watching her and spinning my head to Phelps.  It was pretty clear he knew what she was about to share. Schmitt delivered a very passionate message, one she read, about athletes suffering from depression.  Emotion in the room was palpable.  What struck me was how she characterized depression as an injury, invisible to the world, but an injury just the same.  If you’ve every suffered from depression, her word carried enormous weight.  Schmitt received a standing ovation.  It was the best acceptance speech of the night. See Schmitt’s acceptance speech here:

A final note came from Instagram, Phelps and crew, all smiles, on the private flight back to Arizona. Phelps added “Now headed home…back to work in the morning.”

Mel- My favorite old video from that 2008 meet was when you got into the hot tub to do interviews in you all of your clothes.

Didn’t Garrett get in trouble there for accidentally getting some footage of races while he was doing candid interviews?

Yes. Garrett was interviewing athletes outside of the media zone.

Interesting that Phelps barely acknowledged Gary Hall Jr before/after his acceptance speech. Did Gary Hall Jr run his mouth about Phelps at some point in the past?

Yes, it had to do with a relay that Hall did not get to swim.

Yes, Mel you are reading too much into his “you know who you are” comment. I also read too much into his comment about wishing he was Worlds. I felt he needed to let that go as he and Bowman mentioned that in the past year more than once. I just kept thinking “well, who’s fault is that?”, but I think I overreacted to that and he meant it as a nod to the team. Both Phelps and Allison’s speeches were truly heartfelt. It was sweet that he acknowledged her in his speech separately from the rest of his training group..

Yes but you can’t expect everyone to act the same way. There is an expression; “fool me once, shame on you, fool me twice, shame on me”. Support works both ways (he decides attending the Preakness is more important than attending Whitney’s graduation?) and sometimes people have to decide if they are giving support or being an enabling doormat. Sometimes it’s hard to tell the difference and you always hope you can and not fall for one more “I’m sorry”. Anyway, it looks like he has really got it together and I for one can’t wait to see what he does this year. I think he has a few more records left in him. I also think that we will… Read more »