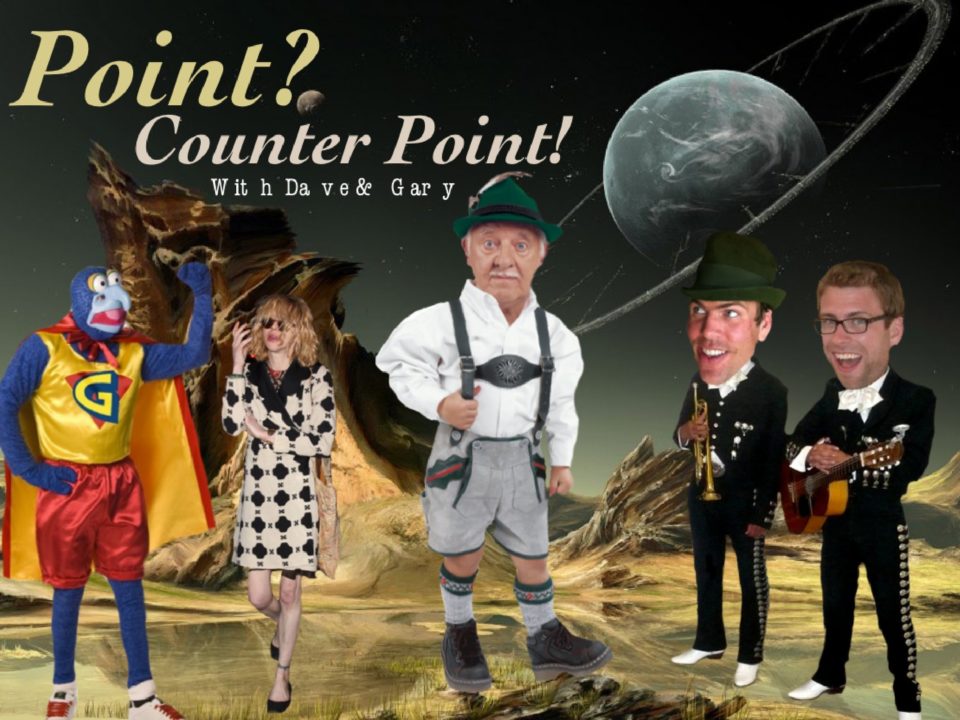 For Halloween, Dave and Gary go as earnest writers. Thought you hated their normal cynical shtick? Wait til you get to their sincere selves. Repulsive!

David: I’m so sick of you making the same jokes over and over. Same cadence, same structure, same joke.

Gary: Something about the weather? Happy Halloween? How are the kids? How ’bout them Giants? How about some small talk? Nooooo! Why don’t we jump right in and have you attack me.

David: Okay, take it easy Sleepless in Santa Barbara, I know where this is going: yes, you got out of Seattle, and I’m still here.

Gary: All I want to say is, don’t you go be sympathetic to our heckler, Dave!!! Don’t you do this to me! You told me from the beginning that we were going to be unapologetic about our stunted ability to formulate comedic perspective!*

David: I agree with everything you just said, except parallels to Hunter S. That seems a bit much…I was thinking more Bob Loblaw. Anyway, what’s your point?

What does the Point? writing project mean to you, Dave?

David: Well Gary,  I suppose that I really like writing with you, other than your ping pong ball stuff. In fact, I just like writing: it makes me happy. I hate sharing it with the world, but also appreciate that that is what you’re supposed to do. It makes the bitter more bitter, but also the sweet sweeter.

Like swimming laps now: it’s fine, and it’s relaxing. But, post-retirement, the pool isn’t an emotional catalyst anymore. In fact, I’ll ask my therapist tonight if that void is why I’m writing.
But I digress. I also like trying to bring something different to the swimming universe, something that I think I would’ve liked when I was [removed] deep in there. I don’t always like the fact that people hate it, but as long as we aren’t ruining SwimSwam, I still sleep at night.Gary: Emotional catalyst? Our writing is the poetry of locker room banter. Toilet stall graffiti scribes, that’s what we are. Every kid on a swim team has said something in the locker room that they would never say in polite company. I think the expression is “talking poop.” It might as well be another language. And there’s an art, a beauty even, to speaking that language correctly. And when it’s done right, it is something to behold. It’s an emotional catalyst.

We celebrate that, Dave. Evangelize it from the hot showers. It’s bitter and sweet. We dedicate Point? Counter Point! to all the swimmers that recognize and appreciate the beauty of proper poop being talked. Right out of our digital mouths. To you, our digital readers. With love. And flaming ping pong balls.

Not everyone is going to appreciate it. I get that. My wife hasn’t laughed once at our column. It’s supposed to be terrible. And arrogant. And stupid….By the way, our heckler has pointed out that I’m doing a much better job at being terrible than you. Therefore, I am winning.

David: What are you talking about? What heckler? We have one heckler, and she’s the American Public.  Do you remember what used to happen before we started deleting everyone’s comments? And, can we talk about swimming for once? Or at least creatively avoid it?

David (ignoring Gary): Gary, don’t be mad at the comment boards, be mad at yourself: we’re the crappy ones.

Me? I hate myself. In fact, I take back everything I said up there about why I write this column…really, I write it because it’s bad, and that’s what I deserve.  Well that, and apparently I’m the one person in the world (other than Mike Gustafson) who thinks you’re funny.  Which, incidentally, makes me hate myself…

Gary: Why don’t we just rewrite the old testament…

Gary (not hearing David due to escalating volume and vigor): …or eliminate rap music from public airwaves!! Maybe we should be more “accessible” by writing a heckler into our dang-num column?! Why don’t we?!

(Yelling) MAYBE WE SHOULD TRY JUGGLING CHAINSAWS WITH OUR…

(Gary proceeds to thrash about violently)

Gary (breathing heavily as he removes his fist from the cabinet): You’re as fun as reading the Morbidity and Mortality Weekly Report!

Gary: Just because some “lunatic” out there takes us seriously it’s like suppression of the mind around here all of the sudden?!

David: Actually, I think that was the writer of Human Centipede 2. But dude, I do have good news for you: We just ruined another chance at greatness – the column is killed at this point – so we might as well talk about something else.

Um…how are things going? Everything uh, everything going good in your life? Are you good?

David: That tough guy act isn’t going to work on me, Gary.

David (Gently taking a step forward and reaching out his hand): Gary, I know that sticks and stones break your bones, but so can comment board words.

Gary (perfectly chipper): God, I feel much better! I think I should immediately patent the phrase “Taking Turds and  Flippin’ Birds.”

David: Actually that’d be a trademark. Anyway, Gary, I’m proud of you. I really felt like we connected back there in demonstrating your vulnerability.

Gary: What the ramrod are you talking about?

David: Our non-fans wanted you to show vulnerability. And you did. You can’t ignore that we just had a breakthrough chapter in this magazine called life back there.

Gary: Lighten up, Dave. Don’t listen to that heckler. We’re not funny? We’re not even trying to be funny. We’re trying for terrible. And you wanna know what? We nail it. Every time. Like champions.

David: I think she said that YOU weren’t funny. “Gary is the problem” is what she said, I seem to recall.

David: Okay, wrap-up time: What are you going as for Halloween.

Gary: Michael Phelps. That or my fifth year as Jar Jar Binks.

David: Perhaps we should go as Hermanos Mariachi?

*[Editor’s Note: You can skip the next paragraphs and get straight to David’s comment. He did.]

I am old too…
I have 2 things with poop in their diapers now.
A boy thing and a girl thing.
Both named Gary.

I think it’s important when being heckled that you push further in the direction that annoys the heckler, well done.

So, you like the new get up? I’m a dancing bear! Swim Swam. A little late to arrive at the scene though, aren’t you? Probably the fault of Gary and Gary. Congratulations on kids, by the way! With names like that they must be gorgeous. You should be proud. I am.

Always a funny one, Vader. That Jar Jar video is a tribute to you.

Hilarity.
Now how is it that a swim message board reader just found this site?
I just read every column you guys have done on the site.
Your heckler just makes it funnier.
Jeah!

Gavin, is that you? I’ve missed you, old friend. I am old, like the poop in our adult diapers, but I can still remember the fun times we used to have on the digital message boards of last decade. Hope you’re doing well!

I swear to Dog, this song was coincidentally playing in the background while I was reading this post. (Not even via Bridesmaids, the public-access station I had on started playing it.)

I love that song…