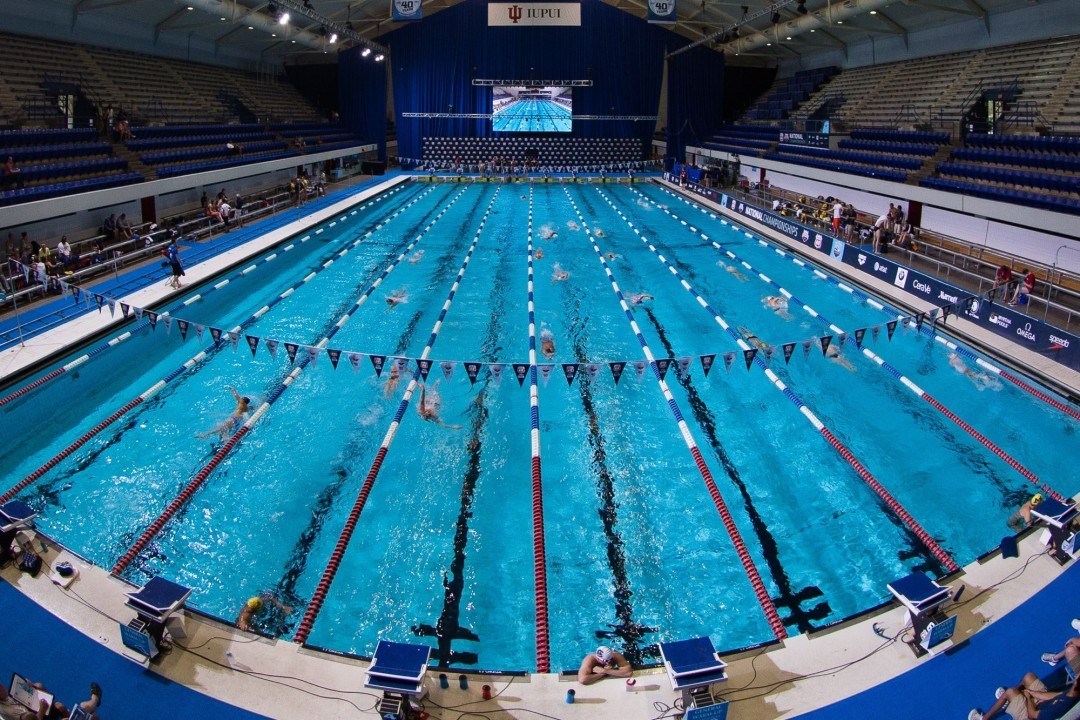 Since 1982, thousands of swimmers have passed through the doors of the IUPUI Natatorium in Indianapolis, Indiana. Indianapolis and IUPUI... Stock photo via Tim Binning/TheSwimPictures.com

“OUR STAFF IS MORE ORGANIZED AND THE SEASONS RUN MORE SMOOTHLY WITH COMMIT” Collaboration: Perhaps the most important benefit that…

Since 1982, thousands of swimmers have passed through the doors of the IUPUI Natatorium in Indianapolis, Indiana. Indianapolis and IUPUI have served as the hosts of the US Olympic Swimming Team Trials four times since 1984 (’84, ’92, ’96, ’00). Gold Medal Mel Stewart’s name is painted on the South wall of the Natatorium, along will all the other athletes that have qualified for an Olympic team at that facility. Between swimming, diving, and synchronized swimming, the natatorium has hosted 13 US Olympic team trials.

A plan to make $30 million in renovations to the IUPUI natatorium has been approved and funded by three major parties. The city of Indianapolis has agreed to contribute $10 million, the University will pay another $10 million, and the Lily Endowment will contribute the remaining $10 million.

The IUPUI Natatorium has a world-class diving well, an 8-lane 50 meter competition pool, and another 6-lane 50 meter teaching/training pool. The facility can accommodate 4,700 spectators and another 1500 people on deck, making it the largest permanent facility in the United States. According t0 the natatorium’s website, 104 American records and 15 world records have been set in the facility to date.

“This project involves several partners coming together to benefit the city of Indianapolis and the IUPUI campus,” IUPUI Director of Athletics Mike Moore said. “The Natatorium is a special place in our community and these improvements will impact swimmers and divers of all ages, including our student-athletes.” The IUPUI Natatorium has been the home of the IUPUI men’s and women’s swimming and diving teams since their inception in 1998.

The project is a joint partnership between the university and the city to help connect IUPUI and it’s campus to the rest of the city. $18 million of the budget will be put towards a new roof, heating and cooling system, pool filtration, lighting, skylights, and other mechanical repairs at the Natatorium. Indianapolis made a bid to host the 2016 US Olympic Diving Team Trials and won on the condition that renovations to the facility will be made before the the Olympic Trials begin.

The remaining $12 million will be to redesign the street layout on IUPUI’s campus. There are currently two major east/west one-way streets running through IUPUI’s campus. The university and city worked together to create a plan to convert both one-way streets to two-way streets to ease the flow of traffic on campus. Anyone who has been to a meet on IUPUI’s campus has seen how frustrating and confusing the traffic can be around the pool. These new renovations will make it easier to get in and out of the pool for fans coming to watch events as well as students and faculty attending classes. The renovations include safer pedestrian crossings and sidewalks, bike lanes, specialized lighting, decorative signage, public art, grass medians, trees and rain gardens.

“Just as the IUPUI campus has been an integral part of downtown Indianapolis for decades, the IU Natatorium has become one of the city’s signature sports venues over the last 30 years,” Indiana University President Michael McRobbie said. “Indiana University’s investment in the future of the Natatorium is emblematic of our commitment to the city of Indianapolis. The planned improvements will allow the Natatorium to provide swimmers and divers of all levels – as well as fans of the sports – with a world-class facility for years to come, furthering strengthening the strong partnership between IU and the city.”

“This announcement is not only a big deal for [IUPUI], but for the entire Indiana Swimming community,” said IUPUI’s Head Men’s and Women’s Swimming Coach, Matt Bos. “In college athletics, facilities play a large role in recruiting and anytime you have the chance to call the natatorium your home, you are in select company. We have always been privileged to call the Natatorium our home and now it will be taken to a new level.”

“We look forward to many more years of Olympians adding their names to the treasured wall of the IU Natatorium, cementing Indiana’s continued position as a sports capital and inspiring future generations of swimmers and divers to strive for greatness at this iconic facility,” said Allison Melangton, President, Indiana Sports Corp.

PLEASE KEEP ME IN LOOP AND KEEP POSTING ME THE VIDEOS …..

I read the article twice trying to find some explanation to what “bid” is being referenced in the sentence, “Indianapolis made a bid and won on the condition that renovations to the facility were made.” Did I miss it, or did a sentence explaining what they won a bid for get edited out?

My apologies, that was for the 2016 US Olympic Diving Trials. I will edit right now. Thanks!