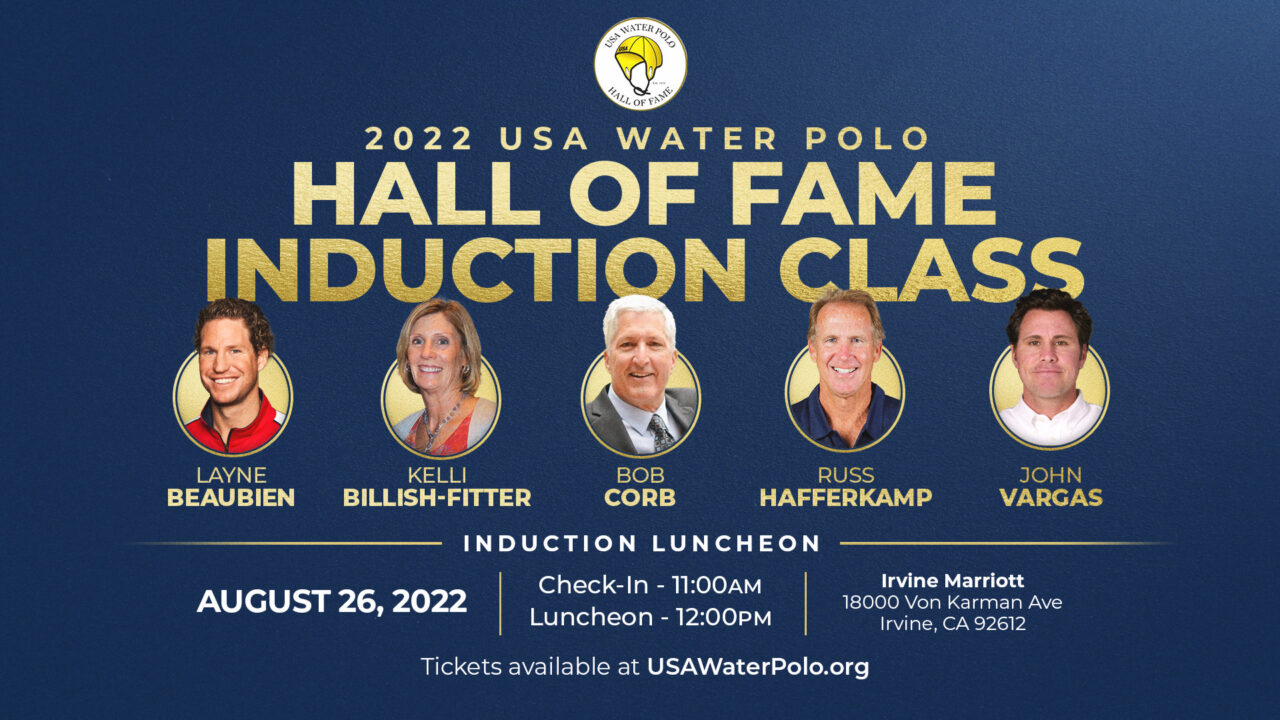 Irvine, CA – May 26, 2022 – USA Water Polo is proud to announce the 38th induction class for the USA Water Polo Hall of Fame. This year’s class represents the complete water polo experience: athletes, coaches and referees with involvement at the age group, collegiate, masters and Olympic levels.

Layne Beaubien, a three-time Olympian and 2008 Olympic silver medalist, and Kelli Billish-Fitter, a women’s water polo pioneer and FINA World Championship bronze medalist, join this year’s class. Bob Corb, a veteran referee who whistled at world-class events around the globe, will be inducted alongside Russ Hafferkamp, a masters water polo champion, coach and author. Rounding out the group is John Vargas, an Olympian, Olympic team head coach and NCAA champion.

Congratulations to all the inductees!

Layne Beaubien
Born on the Fourth of July, in the year of the Bicentennial, it was perhaps a foregone conclusion that Layne Beaubien would represent Team USA. A native of Coronado, California, the 6-foot-6 Beaubien carved out a career as one of the best defenders in the world, competing in three Olympic Games (2004, 2008, 2012). A star at Coronado High School, where he was named CIF player of the year in 1993, Beaubien played collegiately at Stanford University, joining the Cardinal in the fall of 1994, and found immediate success with a NCAA Championship. The title was part of a run on The Farm that saw Beaubien become one of the best players in the college game, earning MPSF player of the year honors in 1998.

After an unsuccessful bid to make the 2000 Olympic team roster, Beaubien reaffirmed his commitment to water polo and became a mainstay for the stars and stripes. He racked up three Pan American Games gold medals, a FINA World League Super Final silver medal and was part of the history-making squad at the 2008 Olympic Games that claimed silver—the first Olympic medal for the U.S. men in 20 years.

While competing for the United States, Beaubien also became a sought-after player abroad, capping up for clubs in Hungary, Greece, France and Brazil. He holds the distinction of being the first American to play for a Hungarian club. Discovered by Hungarian legend Tamas Farago, he joined KSI in 1999 That fall, he represented the US on the “Best of the World” team in the famed all-star game in Budapest that featured Olympic greats from the past and present.

Domestically, he’s both played and coached for the New York Athletic Club, winning a variety of championships and joining the NYAC Hall of Fame in 2009. Beaubien is purported to be the first player in the sports history to win national club championship on three continents, taking titles with Fluminense (Brazil) in 2007, Marseille (France) in 2008 and with the New York Athletic Club (USA) on multiple occasions. Beaubien retired from international play following the 2012 Olympics but has stayed involved in the game by coaching clinics and supporting Team USA. In 2013 and 2015 he was the assistant coach for the USA representative from UCLA at The World University Games, helping guide the Americans to a bronze medal finish in Gwangju in 2015.

Already a member of the Illinois Water Polo Hall of Fame, Billish-Fitter started playing water polo with Chicago Park District in the mid-1970s before joining the boys water polo team at Evergreen High School. A girls team was started one year later, and Billish-Fitter excelled at the game, winning a state title and twice earning player of the year honors. She’d also go on to compete at the Junior Olympics in 1980 and 1981. After competing at the Junior Nationals in 1981, Billish-Fitter began her college career at Slippery Rock in Pennsylvania under the tutelage of legendary coach Richard “Doc” Hunkler. As her college career wound down, her National Team career took off with the Junior National Team in 1983 and then the senior squad. At the same time, she continued to play high level club water polo with the Northern Virginia Water Polo Club.

If there was an important water polo tournament in the 1980s and early ’90s, Billish-Fitter was likely there. Alongside Team USA competition, she competed at Senior Club National Championships, USAWP Collegiate National Championships and seven Olympic festivals concluding in 1993. She’s remained an active water polo player since then, capping up at Masters competitions for Oakland Water Polo, Honolulu Water Polo and Anuenue Water Polo; she earned All-American honors in 2018 and 2019.

Outside of the pool, Billish-Fitter has been a longtime coach in Connecticut, Illinois and Hawaii, and has led clubs and high school programs, including Fenwick and Kamehameha. Billish-Fitter guided Fenwick girls to a state title in 1999 and the Kamehameha girls to runner-up finishes in 2007 and 2008.

Bob Corb
Like many elite referees, Bob Corb started his water polo journey in the pool. A club player at Northeastern University and then the University of Massachusetts, Corb transitioned to the whistle not long after his playing days concluded. He founded the New England Water Polo Referee’s Association before migrating west to California in search of the best available competition to officiate. Corb would advance through the ranks, reaching the USA FINA list in the early ’90s. He took on some of the top assignments around the globe, including two Pan American Games, three FINA World League Super Finals, three Junior Pan American Championships and a World University Games.

A mainstay on the domestic front, Corb was a longtime collegiate official and part of the crew at the first NCAA Women’s Water Polo Championship in 2001. He served as head referee at Junior Olympics and Senior Men’s Outdoor National Championships and was the NCAA National Coordinator of Officials from 2009 to 2019.

Away from wearing the whites, Corb coached a variety of clubs in Southern California, earning medals in Junior Olympics play, and assisted in sports psychology for the USA Women’s National Team. At the administrative level, in addition to his work with the NCAA, Corb served as the head of the Southern California Aquatics Federation, helped launch the national women’s collegiate championship and held a variety of roles within USA Water Polo governance committees. In 2018 Corb received the Paragon Award from the International Swimming Hall of Fame for his contributions to water polo. He remains active in the game today as the Big West Conference Coordinator of Officials.

Russ Hafferkamp
Some things just get better over time—and that includes water polo player, coach and volunteer Russ Hafferkamp. After an All-American career at UC Santa Barbara and time with Team USA leading up to the 1980 Olympic boycott, Hafferkamp never strayed far from the game. A perennial All-American selection and award winner that spans a 40-year-plus playing career internationally and at the US open and masters division, Hafferkamp has been a key part of more than 25 U.S. national championship teams and five FINA Masters world championships, competing largely with The Olympic Club and Santa Barbara Masters.

Hafferkamp has always found time to be more than an athlete. He has coached more than 20 years with a variety of programs, including UC Santa Barbara (men), UC San Diego (men), Cal Poly San Luis Obispo (men), UC Berkeley (men and women), The Olympic Club (men and women) and internationally in Australia (Tasmanian men). He has also coached extensively with five separate men’s and women’s age-group and masters programs.

Hafferkamp has long been a leading pioneer and advocate for athletes within water polo, serving more than 12 years in governance of USA Water Polo in a variety of roles. He was instrumental in authoring legislation and funding for the formation of masters water polo and fast-tracking athletes into officiating. A 2008 International Swimming Hall of Fame honor recipient for water polo and member of The Olympic Club Hall of Fame, he has also served as a researcher and statistician for NBC Olympics during each of the Olympic broadcasts since Sydney 2000.

A longtime advocate and counselor in helping athletes transition from sports to the working world, Hafferkamp authored the book CareerBall: The Sport Athletes Play When They’re Through Playing Sports. To honor 120 years of water polo commitment, he published Water Polo at The Olympic Club: A Century of Excellence. His latest project, a children’s book covering the COVID-19 pandemic, titled Fuzzy the Virus, was released in 2020. Hafferkamp remains active in the game today, coaching, playing and volunteering within water polo.

John Vargas
John Vargas has spent more than 40 years in water polo as a player and coach. He has found success at every level, including high school, college and the U.S. National Team. The youngest of three water polo–playing brothers raised in Hacienda Heights, California, Vargas was a standout at Los Altos High School before heading to UC Irvine, one of the preeminent programs of the time. Vargas helped the Anteaters to a National Championship in 1982 and twice earned All-American honors. He didn’t go far from the Irvine campus after his college days, becoming the head coach at Corona del Mar High School. He continued to play for the Newport Water Polo Foundation, winning three U.S. Open titles and working toward his Olympic dream.

While his older brother Joe made Olympic rosters in 1980 and 1984, Vargas found himself as the final cut for the 1988 roster. Never the biggest player in the pool, Vargas remained determined and helped Team USA to a FINA World Cup crown in 1991. He broke through on the Olympic stage at the 1992 Games in Barcelona with a fourth-place result.

From there Vargas focused on coaching, joining the Team USA staff ahead of the 1996 Olympic Games, while still coaching at Corona del Mar. He earned the top job with Team USA, winning World Cup gold in 1997 en route to a sixth-place finish at the 2000 Olympic Games in Sydney.

After a stellar run with Corona del Mar that saw seven CIF titles and five runner-up finishes, it was off to the college ranks. Vargas took the reins of the Stanford University men’s program, winning an NCAA Championship in his first season in 2002. In a 20-year run on The Farm, he coached a host of Olympians and All-Americans, while winning five MPSF titles and adding a second NCAA title to his résumé in 2019. He added to that five second-place finishes and reached the semifinals on three other occasions. He was also a mainstay on the club scene, guiding the Stanford Water Polo Foundation to two US Open titles on the men’s side. Vargas retired from Stanford following the 2021 season, ending with 389 career victories.