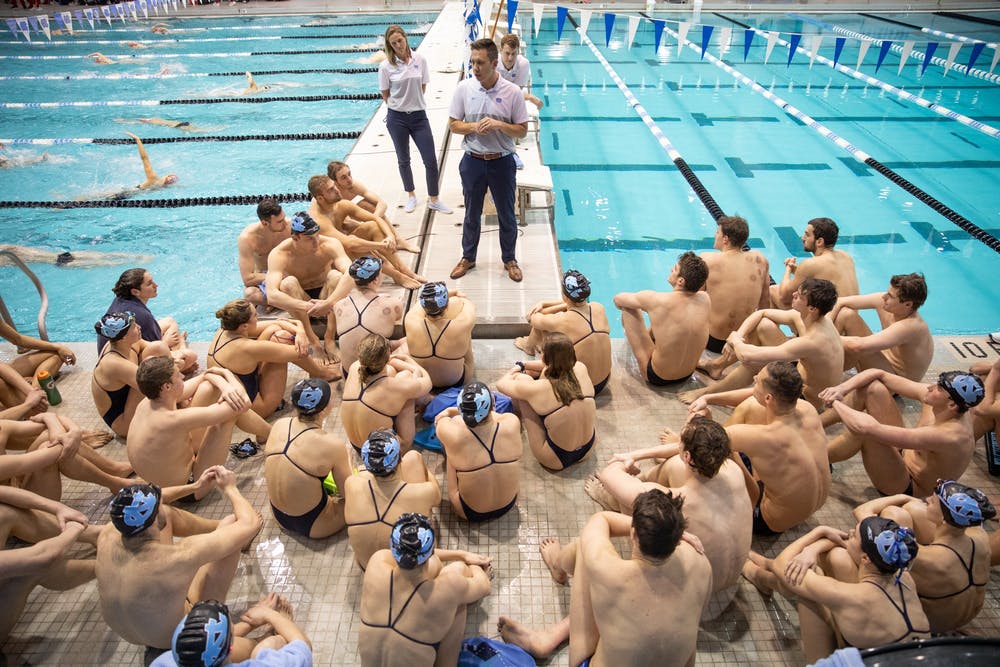 We cover all areas and provide tips that make a difference when getting ready for race day. We also make it relative to age group swimmers.

South Carolina Swimming is excited to offer a detailed underwaters/starts/turns training camp that is focused on ELITE SWIMMING!

After celebrating our 40th anniversary in 2019, we are excited to offer the Hartwick College Competitive Swimming & Diving Camp after a two-year hiatus

Our goal is to provide an atmosphere where swimmers are excited to learn about all areas of competitive swimming: from technique, to racing, and training.

The 2022 UNC Swimming Camps look forward to hosting you for a lively swimming experience in beautiful Chapel Hill. UNC Head Coach, two-time Olympic Gold-Medalist Mark Gangloff, along with the rest of the UNC Swimming Staff will be among the staff for the 2022 Carolina Swim Camps. Mark Gangloff and his staff look forward to sharing their knowledge and time with you to help foster champion swimmers in all!  Camps are open to swimmers of all ages, abilities, and levels. We look forward to having you!

The Foundations of Training Carolina Swim Camp is an all-encompassing swimming experience for athletes. The focus of this camp is to address training habits, technique, and athlete development at the start of their summer seasons. Located at the Koury Natatorium in Chapel Hill, NC, campers will have the opportunity to swim in the same great facility and work with the same world-class staff the UNC’s Men’s & Women’s Swim Teams have. Camps are open to swimmers of all ages, abilities, and levels.

Open training opportunity for club programs to use the Koury Natatorium for workouts. Coaches will provide instruction and discuss topics pertaining to the sport

The Carolina Mental Skills Development Camp is a new camp focusing on the mental side of swimming. With the rise of sport and performance psychology, it is essential that swimmers work on developing their mental game. This camp includes classroom sessions to teach the way athletes think, the skill of focus, goal-setting, and mental toughness. These concepts are then taken to the pool and applied in the water. Located in Koury Natatorium in Chapel Hill, NC, campers will have the opportunity to learn optimal performance thinking from a professional sport psychology consultant, UNC Swimming coaches, and UNC swimmers. Camps are open to swimmers of all ages, abilities, and levels.

The All-Around Carolina Swim Camp is an all-encompassing swimming experience for athletes. The focus of these camps is to address technique, training, and skill development of all four strokes, along with Starts & Turns. Located at the Koury Natatorium in Chapel Hill, NC, campers will have the opportunity to swim in the same great facility and work with the same world-class staff the UNC’s Men’s & Women’s Swim Teams have. Camps are open to swimmers of all ages, abilities, and levels.

Register for All Around Camp #1 here

Mark Gangloff, a two-time Olympic gold medalist and one of the most dynamic young leaders in the world of collegiate swimming, was named the head coach for the men’s and women’s swimming and diving programs at the University of North Carolina in May 2019. Gangloff spent seven years at the University of Missouri where he served as the Tigers’ associate head coach for two seasons before coming to Chapel Hill.

“Mark Gangloff is greatly respected in international and collegiate swimming and diving and has a passion for coaching and developing student-athletes,” says UNC Director of Athletics Bubba Cunningham. “His swimmers have demonstrated improvement and success, and he is known for his ability to relate with and motivate student-athletes. He’s an Olympic gold medalist, captained a national championship-winning team at Auburn and a number of USA Swimming teams in international competitions, and has developed swimmers at Missouri for the past seven years. We look forward to Mark taking our men’s and women’s programs to another level in the years to come.”

The results of Gangloff’s hard work continued to pay off during year two in Chapel Hill. The women finished 12th at the 2021 NCAA Championship, while the men placed 24th. The men’s squad also finished sixth at the 2021 ACC Championships, the program’s best showing in five years.

At the 2021 NCAA Championship, the Tar Heels had a total of seven first team and five honorable mention All-America individual performances, while two relay teams earned first team honors and two others honorable mention. Meanwhile, diving standouts Anton Down-Jenkins and Aranza Vazquez each earned Most Valuable Diver honors at the ACC Championships. Down-Jenkins won the gold medal in both the 1- and 3-meter events, while Vazquez took first in the 3-meter and platform events and a silver in the 1-meter. Down-Jenkins (New Zealand) and Vazquez (Mexico) later competed at the 2020 Tokyo Olympics in the summer of 2021.

During Gangloff’s first season in 2019-20, Carolina’s swimmers and divers showed tremendous growth at both the conference and national levels. The women’s and men’s programs rose three spots at the ACC Championship meets, finishing four and seventh, respectively, while a total of 13 individuals qualified for the NCAA Championship meet – nine women and four men.

Carolina would set a combined nine team records over the course of Gangloff’s inaugural season. In addition, UNC boasted a total of 49 members on the ACC Academic Honor Roll, 14 athletes earned All-America honors and 12 were selected on the All-ACC Academic Team. The program had a Top-10 Scholar Athlete and a Top-6 Service Athlete, an award handed out by the ACC.