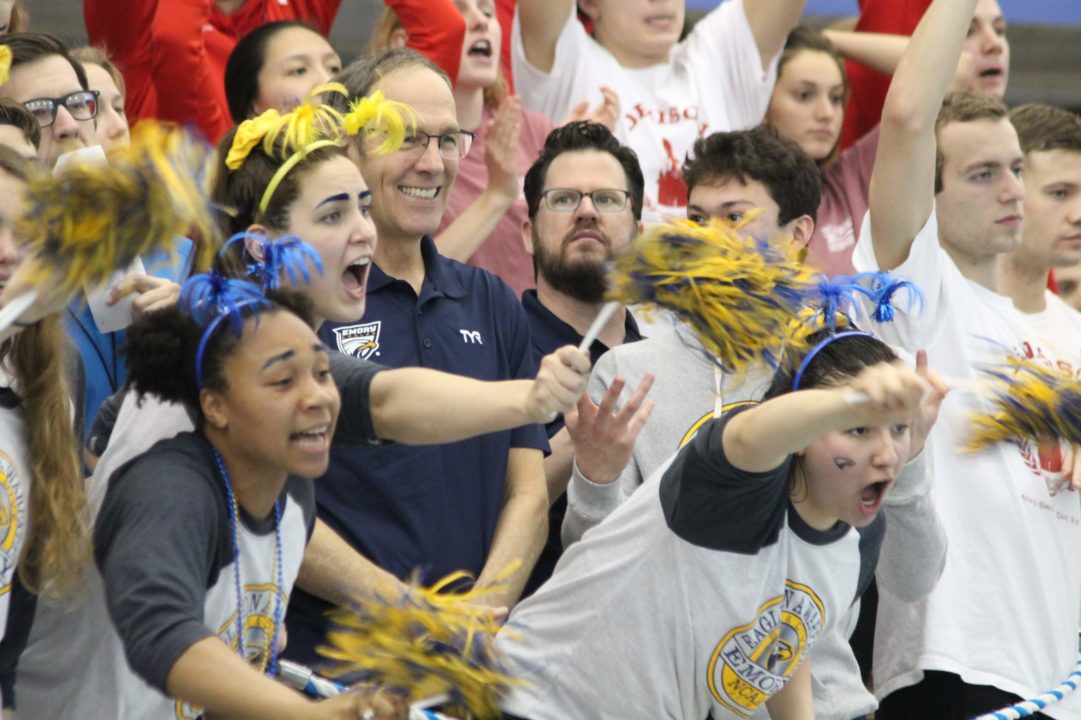 Taylor Leone led the charge, winning the race in 22.97, while Caroline Maki was 2nd in 23.10. Stock photo via Thomas Seagraves - Emory Athletics

The University Athletics Association, one of, if not the premiere NCAA DIII swimming conference, kicked off its 2022 championships on Wednesday with diving events. The first day of swimming action was Thursday. Through the first two days of competition, Emory has established healthy leads in both the men’s and women’s meets. NCAA DIII hasn’t had a national championship since 2019 because of the pandemic, but regardless, Emory was the 2019 women’s DIII NCAA Champion, and the men’s team finished runner-up in 2019.

Chicago got out to an explosive start on Wednesday, finishing 1, 2, 3, and 8 in women’s 1-meter diving. Senior Elizabeth Cron won the UAA title, racking up 442.60 points, while freshman teammate Cynthia Tang took 2nd with a score of 437.55. Senior Alice Saparov was 3rd, totaling 416.55 points, and sophomore Nayna Pashilkar was 8th (398.35). Just off that event, Chicago’s women scored 109 points. Most notably, they were the only team to have multiple A finalists in the event, and they had 4 A finalists.

Things were more even in men’s 3-meter diving, where Emory junior Lucas Bumgarner won with a score of 527.15 points.

In the men’s 200 free relay, a hard-fought battle between Emory and Carnegie Mellon went down to the bitter end. Emory established the early lead, with Colin LaFave leading off in 20.52, while CMU lead-off Erik Feldmann split 20.73. Youssef Hassen pulled CMU even with Emory, splitting 20.54 to Will O’Daffer‘s (Emory) 20.70. Pat Pema, Emory’s 3rd leg, slightly grew the lead, splitting 20.46, while Matthew Nagler was 20.52 on CMU’s relay. It came down to the anchors, where Carnegie Mellon got a blistering 19.51 from Justin Britton. It fell just short, however, as Emory anchor Nick Goudie’s 19.60 was just enough to hold off Britton. Emory touched in 1:21.28, CMU 1:21.30.

Emory got out to the early lead in the 400 medley relay, thanks to a 48.47 backstroke split from Ryan Soh, and never really looked back. The Eagles then expanded their lead with the fastest breaststroke split in the field, a 53.83 from Jake Meyer. Chicago flyer Jesse Ssengonzi split a field-leading 46.60, but it simply wasn’t enough to get within striking distance of Emory. The Eagles got a 47.68 fly split from HwaMin Sim, and a 43.38 anchor from Nick Goudie. Emory touched in 3:13.36, and Chicago was 2nd in 3:14.84.

Nick Goudie was excellent individually yesterday as well, winning the men’s 50 free. Goudie swam a 19.90 to win last night, just off his season best of 19.84, which leads the NCAA DIII rankings this year. Emory was dominant in the women’s 50 free, going 1-2-3-4. Taylor Leone led the charge, winning the race in 22.97, while Caroline Maki was 2nd in 23.10. The pair are now the two fastest swimmers in the NCAA DIII this season after the performances. Emory’s Sammie Kass took 3rd in 23.36, and Zoe Walker came in 4th with a 23.56. Maki is now 6th nationally among DIII swimmers this season.

As a whole, Emory just looks very hard to beat right now on both sides

“The University Athletics Association, one of, if not the premiere NCAA DIII swimming conference”

The NCAC has entered the chat.

not even close. UAA has way more depth.

NCAC is a Denison Kenyon duel meet, UAA is way more deep and interesting to watch

Y’all are sleeping on the nescac. Williams, tufts, Amherst is always a battle of some high quality teams. Easily #2 conference in the country behind uaa

Though tbh both SCIAC and NEWMAC may end up being deeper than NCAC this year. Both will require way faster than 4:46 to make final in 5free…

Sidebar: very excited to see what MIT can do at NEWMACs. They could surprise IMO

100% correct. NESCAC is deepest DIII in the country in part because it has 11 teams with 8 or so likely to send relays for the women and men TBD, but there’s more top end at some other places

think there are two teams missing from the team standings… shouldn’t it be 8 and 8?