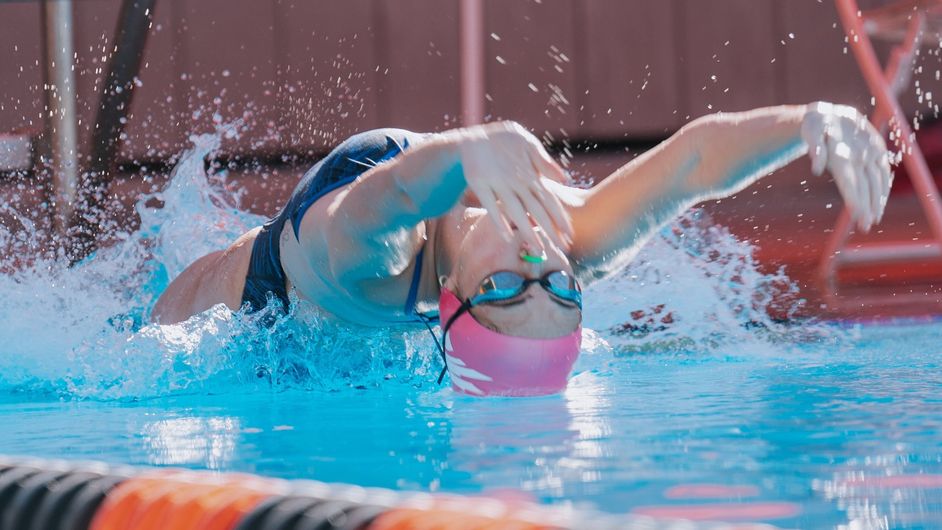 The day started with another win for the Pack in the 400 medley relay. Kyla Alexander, Wiktoria Samula, Josien Wijkhuijs, and Colette Berkenfield secured first place with a time of 3:54.51. Nevada B team finished third, with a time of 4:03.07.

Mariana Vignoli took her second individual win of the weekend after finishing the 500 freestyle with a time of 5:10.28. Destiny Kling (5:24.76) finished in sixth place, while Simone Sapico (5:37.55) finished in ninth.

Samula continued to dominate the breaststroke events as she finished the 200 breaststroke in the first place, with a time of 2:21.44. Dickerson went 2:33.83 to take third place, while Valerie Kitchens (2:34.57) finished in fifth.

Nevada continued with the winning streak as Wijkhuijs (57.70) and Caitlin Smith (58.83) took first and second in the 100 butterfly.

The Nevada swim and dive team is excited to welcome all the alumnae back to the Lombardi pool for the alumni weekend on Oct. 7-8.

The weekend will start with a tailgate for the football game against the Colorado State Rams on Friday, Oct. 7. The tailgate will have food provided starting at 5:30 p.m.

The kickoff for the game is set for 7:30, and swim alumnae can purchase their tickets with a discount HERE.

The weekend will continue with the alumni meet at the Lombardi pool on Saturday, Oct. 8. The meet will start at 9 a.m. and will end around 10 a.m.

The Tigers soared back into the spotlight this Sunday to finish the annual Pacific Invitational at the Chris Kjeldsen Pool, where they hosted Simon Fraser University and the University of Nevada.

The men’s and women’s swim teams had standout showings this Saturday and Sunday, with the men and women winning their duels against Simon Fraser 206-107 on the men’s side and 162-153 for the women’s squad. Notably, the women’s team returned from a 20-point deficit to Simon Fraser to take victory this Sunday. The Tigers, however, fell short in the women’s duel with Nevada, with a score of 181-131.

Ferguson placed fifth in the women’s 100 Yard Freestyle with a time of 53.57, followed by Fitzpatrick with a first place finish at a final time of 47.13, and Mitchell Hopper in third with a final time of 47.43 – missing second place by just 0.07 seconds.

Freshman Katie Honey placed fourth in the women’s 200 Yard Breaststroke with a final time of 2:33.92, while on the men’s side, Freshman Bridger Sink placed first and Senior AJ Dolan placed third, with times of 2:08.34 and 2:13.56, respectively.

As the meet went on, the Tigers continued to perform, placing third and fourth in the women’s 100-Yard Butterfly. Junior Taylor Moultrie and Melendez finished within a second of each other, at times 58.98 and 59.68, respectively. The men placed third and fifth in the men’s 100 Yard Butterfly, with finishing times of 53.57 from Freshman Matthew Honeck and 55.09 from Frankie Fitzpatrick.

After an impressive two days, the Tigers have secured victory over Simon Fraser, just missing Nevada by fifty points on the women’s side. New and old athletes showed out, and the coaching staff is excited to continue developing each individual.

The Tigers compete again on October 21st at 4 p.m. at Fresno State and will host CSU Bakersfield at their next meet at noon on Saturday, November 5th, at the Chris Kjeldsen Pool.