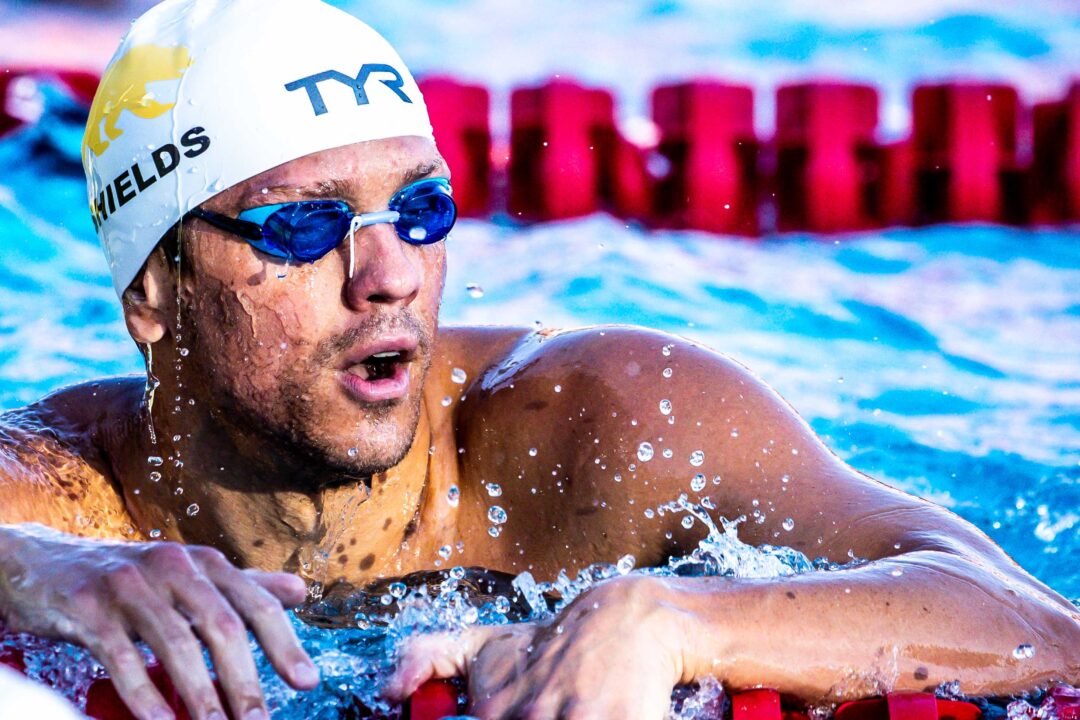 American Tom Shields will vie for his third consecutive win in the men's 100 fly on the opening day of competition at the FINA World Cup stop in Doha. Archive photo via Jack Spitser/Spitser Photography

The first of three finals sessions from the Hamad Aquatic Center in Doha will feature 12 events, with seven of them being contested as timed finals due to small entry numbers meaning five races didn’t require prelims (the 400 frees are always timed finals).

South Africa’s Matt Sates has scratched out of the men’s 100 fly final, opting to focus on the 400 free and 100 IM—events he both won at the Budapest stop earlier this month (he also won the 100 IM in Berlin).

In the 400 free, Sates set a new World Junior Record in Budapest in 3:37.92, and he will renew acquaintances with Lithuanian Danas Rapsys, the winner in Berlin, in the timed final today.

The women’s 400 free was a bit of a game of cat and mouse as the top-five swimmers in the field of six jockeyed for position near the lead early on. Australia’s Madi Wilson flipped first at every wall through the 300, but after Italian Simona Quadarella made her move on the penultimate 50, Wilson answered back with a blazing 29.04 final split to book the win.

Wilson currently ranks 10th in the world this season with her time of 4:02.72 from Match 5 of the ISL regular season.

Wilson’s countrymate Leah Neale had a strong back-half to move up from fifth at the 200 and take third in 4:05.66, while Han Dakyung (4:05.90) broke the South Korean Record in fourth and her countrywoman Ryu Jiwon (4:06.75) also went under the old mark.

Neale ranks seventh in the world this season after clocking 4:01.28 in early September in the ISL.

Matt Sates executed a brilliant final 150 to get the better of Danas Rapsys for the second straight meet in the men’s 400 freestyle, throwing down three consecutive 26-second splits to claim the win in a time of 3:38.64.

Sates finished just over six-tenths shy of the World Junior Record he set in Berlin—3:37.92—that ranks him second in the world this season.

In a race that only featured four swimmers, Kira Toussaint easily claimed her third straight victory in the women’s 50 backstroke in a time of 25.93, finishing just over a tenth outside of her World Cup Record and top-ranked seasonal time of 25.81 from Berlin.

Toussaint owns the world record in the event at 25.60, having hit that time twice in late 2020, and has now been under 26 seconds an incredible 14 times.

Australia’s Holly Barratt was the only swimmer within earshot of Toussaint, taking second in 26.47. Barratt ranks tied for 10th in the world in 2021-22 with her 26.32 swim from Berlin.

A little look behind the scenes pre-race:

Can you feel the pressure?
All set in the call room at the #SWC2021 DOHA pic.twitter.com/LF1I8WWew9

Not unlike his countryman Sates, South African Pieter Coetze made a huge move late to walk away victorious in the men’s 200 backstroke, throwing down a 27.45 final 50 to move past South Korean Lee Juho and touch first in 1:52.09.

Lee, who established the early lead with a 54.64 opening 100, was caught by Israel’s Yakov Toumarkin on the final length as the two shared the runner-up position in 1:52.98.

For Toumarkin, he was eight-tenths slower than his season-best of 1:52.19 set in Berlin.

Hungarian veteran Zsuzsanna Jakabos made up more than eight-tenths of a second on Maria Ugolkova over the final 50 of the women’s 200 fly, pulling off the comeback victory in a time of 2:06.23.

The 32-year-old Jakabos closed in 32.98 to erase Ugolkova’s six-tenths lead at the final turn, denying the Swiss swimmer a second straight victory after Ugolkova finished atop the podium in Berlin.

Jakabos’ time shaves just under three-tenths off her season-best of 2:06.52, set in Budapest, and moves her into seventh in the world rankings. Ugolkova was 2:06.47 for second, .03 slower than her winning time from Berlin.

Slovenian Katja Fain was well off her seasonal best of 2:07.04 but still took a comfortable third in 2:09.90, while Australian Madeline Groves was a notable DNS.

It wasn’t quite the 48-second form he showed earlier this month, but Tom Shields still produced his third consecutive win in the men’s 100 fly in a time of 49.46, pulling away from Hungary’s Szebasztian Szabo (49.92) over the second 50.

Shields has been on fire throughout the month of October, winning in Berlin and Budapest with back-to-back swims of 48.67 and 48.83. Set to rejoin the LA Current for the ISL playoffs on November 11, Shields currently ranks second in the world in the event behind only Caeleb Dressel (48.53).

Szabo, who competes for the Aqua Centurions in the ISL, cracks the 50-second barrier for the first time in 2021, having previously been 50.08 in Berlin. The Hungarian’s best time stands at 49.75, set during Season 2 of the ISL in November 2020.

Belgian Louis Croenen was a distant third in 51.54, out-touching Portugal’s Fernando Souza da Silva (51.55), who was the top seed from prelims.

Russia’s Yuliya Efimova cruised to victory in her first competition since the Olympic Games, pulling away late to win the women’s 200 breaststroke in 2:22.19.

Turkey’s Viktoria Gunes, the Budapest winner in 2:22.23, was a DNS, meaning there was only four swimmers in the field.

A relatively sleepy women’s 200 was followed by an exciting battle in the men’s 100 breast, with eight men breaking the 59-second barrier and four of them sub-58.

Leading the way was Dutchman Arno Kamminga, who inched in front of Germany’s Fabian Schwingenschlogl on the back-half to win the event for the third straight time in 56.35, having set the world’s #2 time in Budapest at 56.08.

Schwingenschlogl, who held a narrow lead over Kamminga at the 50, was just under three-tenths back to take second in 56.63, dipping under his German Record of 56.64 set at the Budapest stop.

Russian 200 breast specialist Anton Chupkov, who opted to race here after suggesting he was headed toward retirement after the Olympics, moved up from fifth at the 50 to take third in 57.56, ranking him 13th in the world this season.

South Korea’s Moon Jaekwon broke the country’s National Record for the second time today, clocking 57.78 after going 58.01 in the heats.

Slovenian Peter Stevens, previously an NCAA rival of Schwingenschlogl, was fifth in 58.39.

Ranomi Kromowidjojo denied Emma McKeon a third straight win in the women’s 50 freestyle, as the 31-year-old Dutchwoman scorched a time of 23.46 to touch first and move up one spot into fourth in the world rankings.

Kromowidjojo had previously been 23.74 this season, set during the ISL’s Play-In Match, and moves past McKeon in the 2021-22 rankings.

Her Australian teammate Madi Wilson showed off her range by taking third in a personal best time of 23.90 after winning the 400 free at the beginning of the session. Wilson set her previous best in Budapest at 23.96.

Another South Korean Record fell at the hands of Jeong Soeun, who improves on her prelim 24.59 in 24.47 to take sixth.

Just like McKeon, Australian Kyle Chalmers was denied his perfect World Cup record in the men’s 50 free as Russia’s Vladimir Morozov blasted a 20.89 to claim the victory.

Chalmers clocked 21.02 for second, while Dutchman Jesse Puts took third in 21.13 after leading the prelims in 21.15. Fresh off his runner-up showing in the 100 fly, Szebasztian Szabo grabbed fourth in 21.38.

Both swimming their second event of the session, Maria Ugolkova edged out Michelle Coleman to win the women’s 100 IM in 58.82.

Ugolkova’s time was .01 slower than her winning time from Budapest which also stands as the Swiss National Record.

Coleman, who was just minutes out of racing in the 50 free, improved on her personal best by almost half a second in 59.18, having clocked 59.65 in Budapest.

Belgian Fanny Lecluyse dipped under her six-year-old lifetime best to take third in 1:00.09.

Seto, who only raced the event once this season in the ISL, set his best time of 51.40 back in September 2018, and that marked his only time sub-52 until today. The Japanese star moves into third in the 2021-22 world rankings, bumping Sates down to foruth.

Sates sets a new personal best in the runner-up position, having previously been 51.78 in Berlin and 51.77 in Budapest.

Korean sensation Hwang Sunwoo got in on the National Record-breaking spree in third, leading the field through the 50 (23.65) before finishing third in 52.30, taking more than a second off his mark set in the prelims (53.35).

Yakov Toumarkin rounded out the top-four in 52.70.

Severe lack of televised races… thanks FINA for growing sports coverage . They stopped doing livestreams on YouTube from day 3 of the Budapest round so we can’t even appreciate the swimming meet

not sure why either. they youtube stream a lot of water polo and diving events which the world cup would be equivalent to or smaller than, so they should do the same for swimming

Cheers .. ironic that they would geoblock a “world” cup event though

These guys are just swimming for the bag.

Morozov getting back in shape?

Small meets in SCM with limited stakes are his thing.

Tom Shields getting it done!!! congrats

6
0
Reply
Just give the trophy to the condors already

And I thought it was hard to find an ISL livestream…

Honest question comrades- does anybody actually watch this?

I would be watching it if Eurovision sports was working

I’d watch too if it was on cable (instead of reruns of 1990’s football games that they seem to show at odd hours of the night) so it could be DVR’d to watch on our local time.

Seems to be so, maybe because Doha is not in Europe lol.

FINA claims it’d be there though https://www.fina.org/news/2299583/swimming-world-cup-doha-where-to-watch

Also Eurovision sports works without vpn (except nothing showing up today)