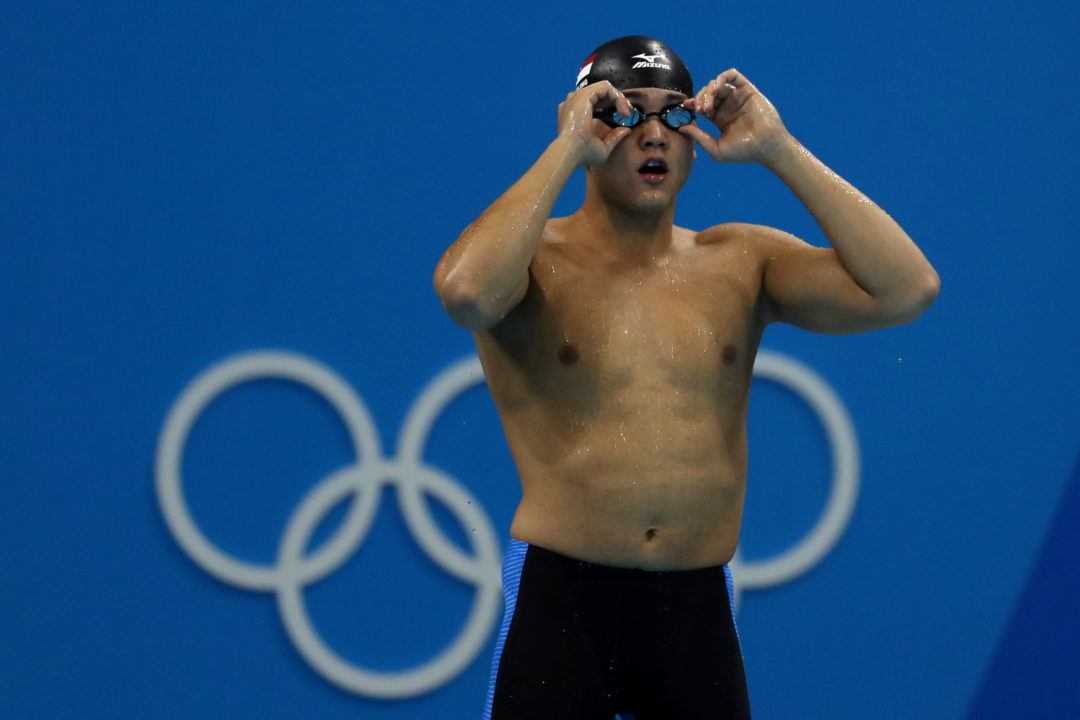 Olympic champion Joseph Schooling got his hands on the wall first in the men's 100m fly for gold at the 2019 SEA Games in the Philippines. Archive photo via Simone Castrovillari

The very next day after coming up short in the 50m fly event, Joseph Schooling got atop the 100m fly podium to take his first individual 2019 Southeast Asian (SEA) Games gold here in New Clark City, Philippines.

Yesterday, 24-year-old Schooling clocked a 50m fly time of 23.61 to miss out on gold by only .06. Taking the top prize was Singaporean teammate Tzen Wei Teong, who produced the mild upset with a winning effort of 23.55, a new lifetime best for the 22-year-old.

Flash forward to tonight, however, and Schooling was determined for redemption, gutting out the last 20m to get his hands on the wall just ahead of Quah Zheng Wen, another Singaporean teammate. Schooling touched in 51.84 to win by a fingernail, as Zheng Wen stopped the clock only .03 later in 51.87.

Schooling’s lifetime best rests at the 50.39 that earned him Olympic gold at the 2016 Games in Rio. It was at that same competition Zheng Wen earned his lifetime best of 52.08. However, with his performance here, Cal Bear Zheng Wen has now gotten under the 52-second threshold for the first time ever. Schooling owns the SEA Games Record with the 51.38 he put up for gold in 2017.

Both Schooling and Zheng Wen have qualified for the 2020 Olympic Games, with their respective outings dipping under the 51.96 FINA Olympic Qualifying Time (‘A’ Cut).

“It’s always fun to get up and race each other … I don’t think I would have gone as fast as I did if I didn’t have this guy [Quah Zheng Wen] next to me. I knew I had to bring it tonight and I could have very easily gotten out-touched by him.

“Most important thing was to get that A cut,” said Schooling. “I’m happy to be able to accomplish what I set out to do tonight.”

“I just swam for myself and the people around and people that supported me,” he said.

“I think the longer you swim and the more exposed you get the more you realize that the people closest to you are the most important thing.”

Funny that this is a swimming website but the comments are about what an athlete’s body looks like. Joseph has always had a somewhat unique body compared to some other elite swimmers. But like most, he leans down at taper time. It’s seems to be working for him. Just over a second over his OR, in season, isn’t exactly slow. He looks great in and out of the water.

I remember a interview with Murphy where he discussed experimenting training at a heavier weight, then losing weight for big meets. Maybe Schooling uses the same approach?

There’s no way he’s not fully tapered. He went 52.9 at worlds this year. I do hope this is starting point of him working back into sub 51 though.

I highly doubt he’s “fully tapered” when his goal meet is just months away.

It’s his fastest time since last SEA games, when he went 51.04

Sub 51 will be a dime a dozen his summer.

Hasn’t been working for him since 2016. And — we’re talking about a highly aid professional athlete, not some Bolles high schooler. If Lebron or Messi or Nadal showed up with love handles the size of an inner tube, there’d be shaming —- for not taking their profession and sport seriously and wasting their incredible talent.

His time would have won the US Open. Is that a high school meet?

Guess what Bolles swimmer didn’t swim the event? The guy who can beat him by 2 seconds and didn’t piss away his talent.

I think we can Have a biggest loser weight loss show with just swimmers.

Schooling, Lochte, and Haas. Who else we gonna throw in there

Was about to say, based on the picture at the top, that he seems to have less of a muffin top than last year. But the video shows pretty clearly, especially from the rear view, that the love handles are still there. Still, in a roundabout way, that’s almost encouraging: if he can swim a 51.84 lugging those things around, it would seem that if he just loses that weight, he could get back down to the 50-point range pretty easily. The power’s still there, he’s just a little less hydrodynamic. (And it’s easier to lose fat than to gain power.)

Proof that he is natural. Most of those guys that are ripped are on chemical enhancers.

That’s the biggest bs I’ve read today. Are you suggesting that Schooling has never used any kind of supplement in his life? Also, most of those ripped guys are ripped because they lift and swim all day.

me too thats insane

isnt he sponsored by speedo? why he wearing mizuno?

Picture is from the 2016 olympics (hense the olympic rings behind him). He was endorced by speedo in May 2018 when he became pro

He indeed went back to wearing a Mizuno for this swim….

Smh, not even wearing the IV ST.

He’s wearing a Mizuno in this race lmao

Oh I didnt even realize lmao. That I dont know. Its the same situation when Peaty wore a TYR cap at the arena pro series in 2017 indy even though hes sponsored by Arena

His back half was good compared to lane 4 but crazy how he has gone from winning gold in Rio to being relieved to make ‘A’ cut. Also, he appears to be in lochte shape