2018 Japan Swim Day 1 Finals: Koseki Back From Suspension With A 58 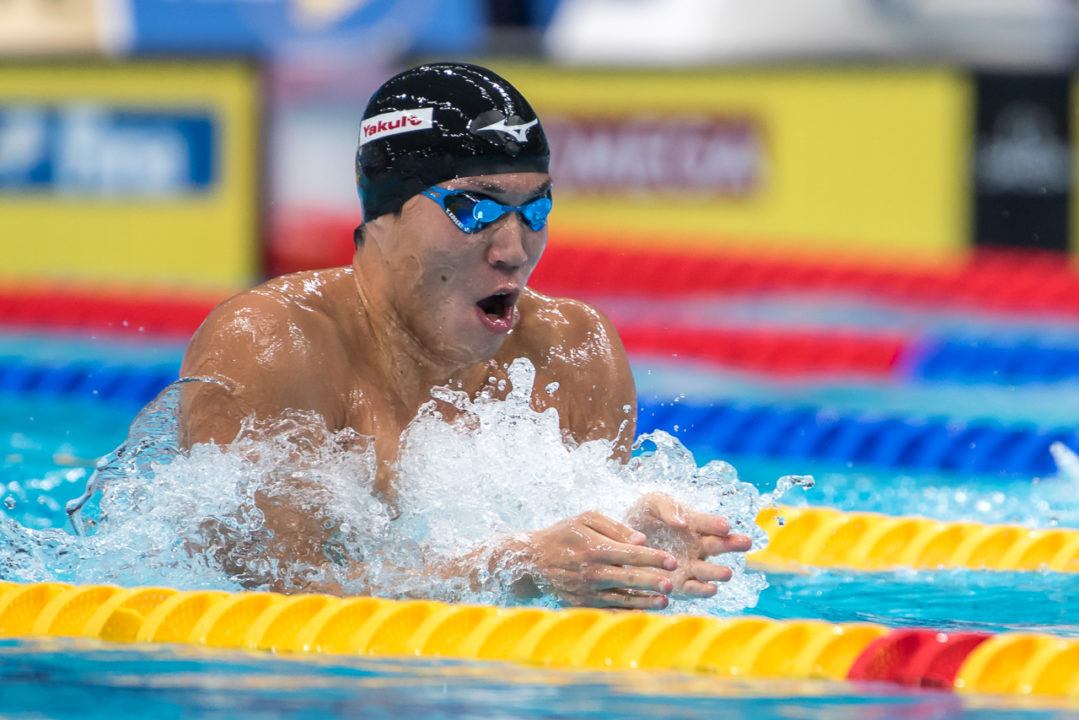 Yasuhiro Koseki is making the most of his time back after a suspension for a team altercation, racing to within .06 of the Japanese 100m breast national record. Archive photo via Peter Sukenik/www.petersukenik.com

Use this day for active recovery, to relieve strain on your joints, and to learn new skills to improve your workouts for the rest of the week.

Day 1 of the 2018 Japan Swim already brought us 2 new national records on the women’s side, speaking to the seriousness with which the nation’s top athletes take these Pan Pacific Games-qualifying championships.

As reported earlier, Satomi Suzuki crushed a new personal best and NR in the women’s 50m breaststroke prelim this morning, touching in 30.64 to take the top seed headed into tonight’s final. That hacked over .3 off of her own previous personal best of 30.96 from last year in Budapest, and also shaved .02 off of the previous NR of 30.66.

Although Suzuki wasn’t able to reproduce the stellar effort in tonight’s final, she still nailed the gold in a mark of 30.95 to represent the only swimmer to dip under the 31-second threshold.

We also reported Rikako Ikee‘s new national record in the women’s 100m butterfly, as the 17-year-old clocked a monster 56.58 in tonight’s 100 fly semi-final. Setting herself up nicely with a morning swim of 57.14, Ikee roared to the wall to stake her claim as the woman to beat, establishing a new #1 time in the world. She will contest the final tomorrow night in Tokyo.

In other semi-final action, national record holder Ryosuke Irie continued to stay on top of domestic rival Junya Koga in the men’s 100m backstroke, with the pair replicating their 1-2 finish from prelims. Tonight, Irie punched a time of 53.39 to Koga’s 53.61, while Junya Hasegawa is ready to join the party as the 3rd seed in 54.24 headed into tomorrow night’s final.

The men’s 100m breaststroke semi-final also took place this evening, with another national record at risk of falling. The just-off-suspension Yasuhiro Koseki wasn’t messing around tonight, as the 26-year-old threw down the 2nd best performance of his career in 58.96. That’s just off the 58.91 he produced in Rio back in 2016 and falls within .06 of the national record held by Kosuke Kitajima at 58.90.

Koseki was over a second ahead of the rest of the men’s 100m breaststroke field, as Hayato Watanabe sits as the 2nd seed in 59.97, while 200m breaststroke world record holder Ippei Watanabe is positioned 3rd in 1:00.03.

For Koseki, he is now ranked only behind Great Britain’s Adam Peaty as just the 2nd swimmer to go 58 this season.

Among the individual finals comprising tonight’s session, with the men’s 400m freestyle containing Olympic gold medalist Kosuke Hagino among the competitors. Although Hagino owns Japan’s national record of 3:43.90 in this event, he fell short this evening clocking 3:48.47 for silver, but still a productive opening swim.

Winning the men’s 400m was Naito Ehara, who wasted no time getting out in front and staying there to produce his fastest time this season. Ehara unleashed a 3:46.64 to score a huge new personal best, lowering his 3:47.18 from last year’s Japanese National Games. With his performance, Ehara easily took gold and most likely qualified to race the event at the Pan Pacific Championships.

Ehara’s time keeps him in 4th place among the world’s fastest this season.

Kitajima is still the Japan National record holder for the 100 breast ? jeez , that’s impressive ! and no one has been under that time yet so far feels a bit odd .

Well he used an lzr racer for that… and a couple dolphin kicks.

3:48 from Hagino is a bit concerning, but hopefully his IMs are looking a bit sharper. I want to see him and Chase throw down this summer, but he’s gotta make the team first.

I’m concern too. In Budapest he was pretty slow in the last 100 free (surely one of the slowest in the field) in the 400im.
Maybe he has some problem with the free after the shoulder surgery?

He was so sharp in 2016. Thought he would be the next Phelps but he’s a shadow of his former self now. His freestyle technique is gone, his endurance is gone, his only good event is the 200 IM now.

There will not be another Phelps.

Swim of the night has to go to 17 year old Keisuke Yoshida almost running down Hagino at the end and going 3:48.69