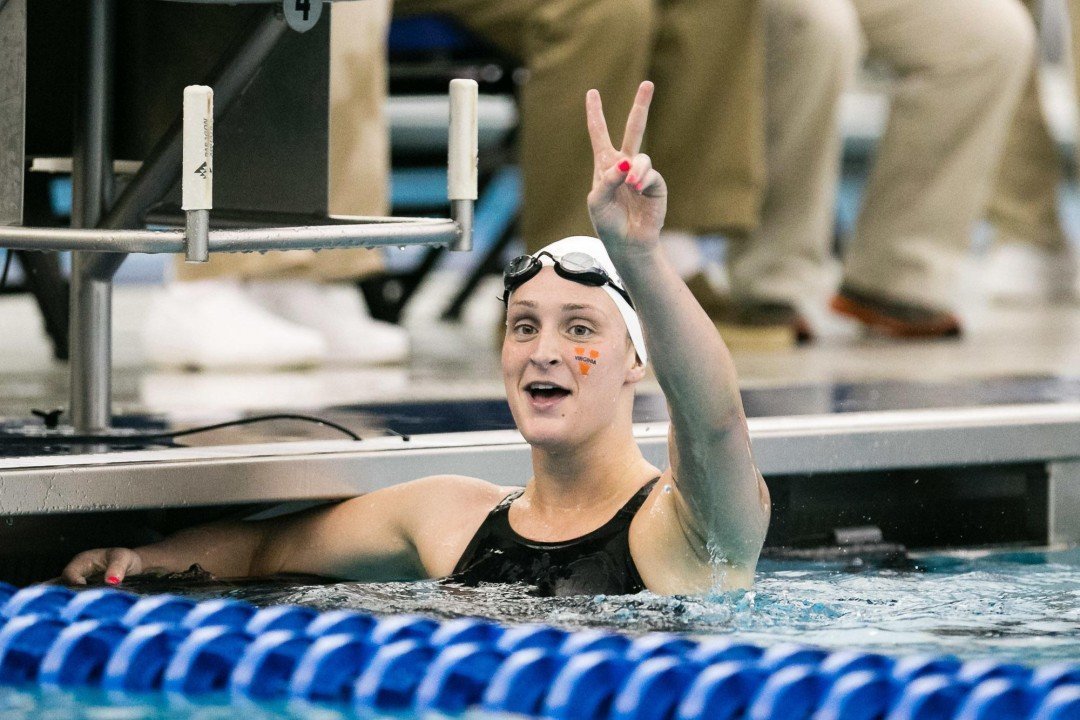 Virginia’s Leah Smith is expected to repeat as champion in this event in 2016, after she broke NCAA records in the 1000 and 1650 free at the ACC Championships and nearly took down the 500 record in that event, too. She’s established herself as a favorite for the 2nd 400 free U.S. Olympic Team spot behind Ledecky, and will likely contend for a spot on the 800 free relay.

That being said, Smith will feel some heat from two Georgia Bulldogs in this race, as compared to just Brittany Maclean in the mile. Maclean comes in at #2 with her 4:33.10 from SECs, though she’s been as fast as 4:32.53 in her career. Maclean was pushed at SECs by teammate Hali Flickinger (4:33.90), and the two are experienced racers who won’t let Smith run away with this one.

Coming after them are a slew of 4:38s and 4:39s– who can break through and find their way to the A final? There’s Louisville freshman Mallory Comerford, who had a great summer in the 100-200m free range and has extended her prowess up to the 500 free. NC State’s Hannah Moore, who transferred out of Michigan, has had an impressive year and sits at #7.

USC’s Chelsea Chenault is the #8 seed, and she’s coming off of a Pac-12 title in this event. Smith’s teammate Hanne Borgerson, a senior, sits at #9. Texas A&M’s Sarah Gibson has had a breakout year, and at #10, she might have it in her to crash the top 8 party.

There are still a ton of Big Ten talents sitting just outside of the top 10– Lindsey Clary of Ohio State, Gillian Ryan of Michigan, Kaersten Meitz and Alexa Davis of Purdue, Brooke Zeiger of Minnesota, Danielle Valley of Wisconsin. It’s hard to believe that someone as talented as Indiana’s Kennedy Goss didn’t even make the top 8 at that meet. They all battled it out at the Big Ten Champs, and Ryan, Zeiger, and Valley have all been faster in their careers than their conference swims this season.

Florida’s Jess Thielmann is a regular top 8 appearance in the distance events, so while her conference time seeds her at just #15, expect her to make a big move up to the A final. Another lower seed expected to break through to the top is #22 Bonnie Brandon from Arizona, who is seeded with a 4:40.53 but has been as fast as 4:35.43 in her career.

Dark Horse: #12 Gillian Ryan has had trouble over the last few years matching her times from high school. She may not be able to hit her 500 best time of 4:36.99 from 2013, but after her 200m free lifetime best at Winter Nationals (1:58.50), it looks like Ryan might be able to break through again in her sophomore season with Michigan. She comes in seeded with a 4:39.17.