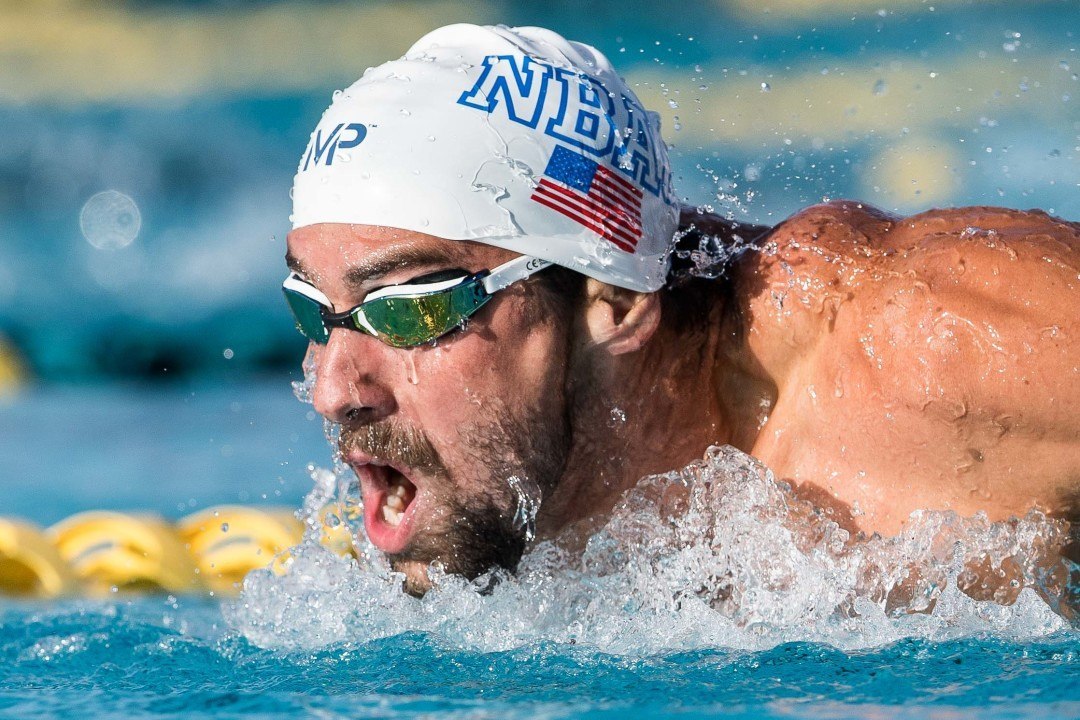 All hail the king…of fly that is, as 30-year-old Michael Phelps takes on the rest of the country in his pet event, the men’s 200m butterfly. As if the new dad hasn’t already made enough history with his 22 Olympic medals, if Phelps were to win the 200m butterfly in Omaha, it would make 4 straight Trials titles in this event for the North Baltimore Aquatic swimmer. That would mark the longest streak of any individual event winner in U.S. swimming history.

With the stunner of a time Phelps put up at U.S. Nationals last summer, 1:52.94, the 18-time Olympic gold medalist rendered himself the favorite for Omaha, primed to take on the likes of domestic rivals Tom Shields, Tyler Clary and Jack Conger with his physique in its best form since 2008.

Phelps has consistently contested this event over the course of his comeback years, putting up the nation’s top times along the way. He followed his San Antonio feat up with a solid 1:56.11 at Winter Nationals last December, while also clocking a 1:58.14 at the Arena Pro Swim in Mesa this past April. Fueling his swims, no doubt, is the desire to take on South African Chad Le Clos in Rio, as the two have had some trash talking going on since Le Clos claimed the World Championship silver medal in the event last year.

To get to Rio, though, Phelps will need to fend off my pick for 2nd place in Omaha this year, University of Texas swimmer Jack Conger. Conger has been performing impressively since coming up short on an individual level at the NCAA Championships, with some fearing he’ll become college’s best swimmer to never have won a non-relay title.

The 21-year-old Conger’s 200 fly time of 1:54.54 from Summer Nationals put him in the runner-up spot behind Phelps in San Antonio and still stands as the nation’s 2nd-fastest time since London. In fact, his time would have earned the 2nd place spot at 2012’s Trials, beating out Clary’s time of 1:55.12.

Conger put up a 1:57.01 at the Longhorn Elite Invite earlier this month and has consistently proven he can be threatening on the long course scene. If there’s a weakness with Conger it’d be a two-folded one in the form of his attempting this event for the first time at an Olympic Trials, as well as the fact that he’ll most likely have the 200m freestyle final on the same night as the butterfly semi-final. The 2free/2fly double shouldn’t impact his making the latter’s final, but it may affect his lane placement. Swimming alongside Phelps could make all the difference in Conger’s final time and his Olympic berth result.

Right behind Conger in our prediction is tough swimmer and short course American Record Holder Tom Shields. The man from Cal Aquatics made the 200 fly final at last year’s World Championships, but wound up 8th overall in a slower time than his prelims outing. After clocking a 1:56.12 in prelims and 1:55.75 in semi-finals in Kazan, Shields touched in 1:56.17 to finish well-off the podium.

But that 1:55.75 was indeed a stellar swim when looking at his 200 fly times throughout his career. His fastest time was the 1:55.09 he threw down at the 2014 Summer Nationals meet, so the idea he’d go beneath 1:55 is not a far reach. Whether he can maximize his lethal weapon that is his almost-unmatched underwaters to hold on and beat out Conger down the stretch will be the primary question in Omaha.

SwimMAC Elite veteran Tyler Clary will also be in the mix and one to watch, as he earned the Olympic berth behind Phelps in 2012 and wound up 5th in London (1:55.06). Clary has since clocked a 1:55.42 at 2014 Pan Pacific Championships, as well as a 1:55.86 as recent as in prelims of last year’s World Championships. If Clary swims the 400 IM in Omaha, he’ll have that event’s prelims and finals under his belt before taking on this event 2 days later, which may or may not impact the 27-year-old’s performance in this fly race. However, a stacked schedule is nothing new for this seasoned racer and defending 2012 Olympic gold medalist in the 200 backstroke.

On the younger end of the spectrum, Phelps’ protegé at the North Baltimore Aquatic Club, Chase Kalisz, may pop an unexpected swim at this year’s Trials. His best time sits at the 1:56.50 he clocked at 2014’s Summer Nationals and his more recent time of 1:57.19 rendered him the silver medalist at Federal Way last December. If he can stick alongside his training partner Phelps, Kalisz may just do enough to keep it a close race to the wall among the other non-GOAT competitors.

Cal swimmer Andrew Seliskar had a relatively quiet freshman year after dominating the age group scene during his latter teen years. Although he soared to a personal best time of 1:55.92 at the 2014 Junior Pan Pacific Championships, he was only sub-1:56 one other occasion, matching that same time at the Arena Pro Swim in Austin. He’d need to bring some major heat to contend with the top 3.

21-year-old Pace Clark is another final contender who may be just shy of finishing in the top 3 for this year. He scored a time of 1:56.97 at the Longhorn Elite Invite earlier this month, a mark which sits just two tenths off his best. Although that bodes well in the final push before Omaha, he would need to have the swim of his life to make one of the Olympic roster spots.

The same holds true for our pick for the 8th place finisher, Athens Bulldogs’ Gunnar Bentz. A standout swimmer for the University of Georgia, Bentz has proven his has solid talent in the big boy pool as well, knocking down a best time in this 200 fly event at last month’s Arena Pro Swim in Indianapolis. His mark of 1:57.70 is well off the leaders’ sub-1:55 outings, but enough to potentially sneak into Omaha’s final and get closer to establishing himself as a candidate to take the torch from a retiring post-Rio Phelps.

Since he will not qualify for Rio, I think trials will be the last time we see Clary in action

Well, probably not in this event. But he’s still got a better than even shot at making the team in the 4 IM or 2 back. (Chances significantly higher if Lochte doesn’t swim either event.)

Agree, if you are a Clary fan soak it up at trials.

While shields has been under 1:57 more times than Conger, Conger has better endurance and only fades at the end if he forces his speed too early, live at ncaas (he tried to get out after it, but Joe had the easy speed to keep up with him and beat him). Conger is a safer bet in the 200, but Shields has a better chance in the 100.

I think Seliskar has a shot to beat Shields for that 3rd spot. 1:39scy as a Freshman is incredible, and I feel like being part of that Cal training group will give him a huge confidence boost. And even though he wouldn’t make the Olympic team, I feel like it would set him up well to take over the 2fly with Conger after Phelps retires.