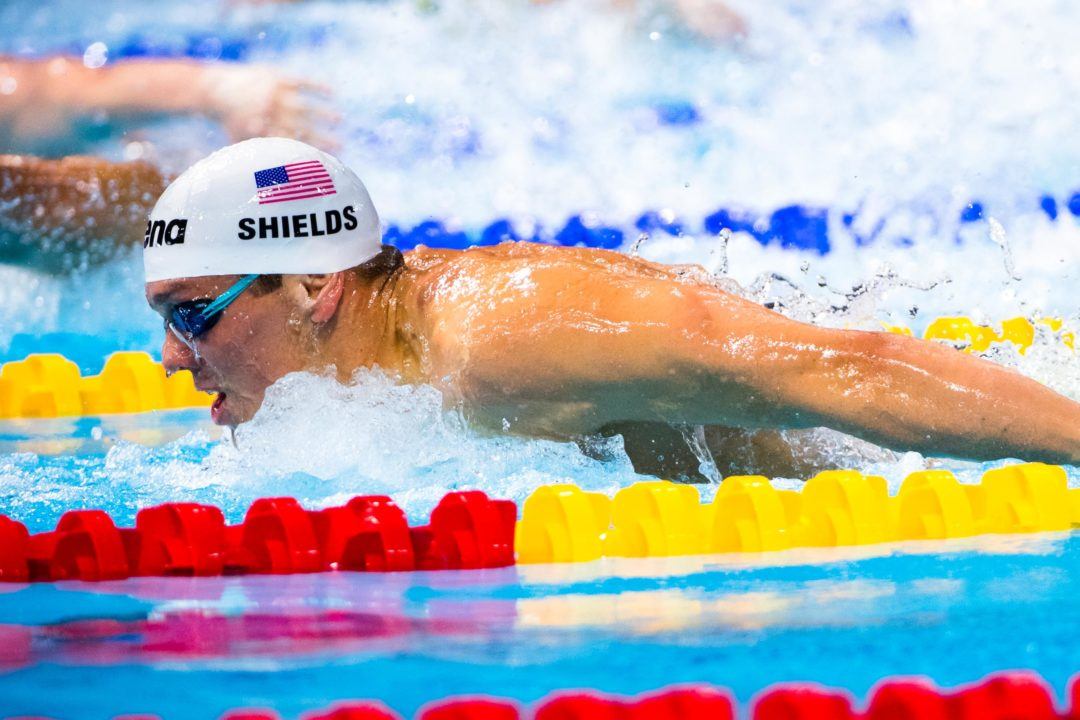 The men’s 100 fly final is slated for tonight, which will feature a highly anticipated match-up between South Africa’s Chad Le Clos and Team USA’s Tom Shields. In the 200 fly earlier in the meet, Le Clos picked up the gold while Shields wound up in 2nd place, so Shields will be looking to turn the tables. Le Clos will be tough to beat, as he’s the defending short course world champion and World Record holder in the event.  Those two aren’t the only swimmers to look out for, though, as Great Britain’s Adam Barrett is the top seed and France’s Jeremy Stravius could also be a title contender.

2016 Olympic champ Penny Oleksiak will be racing in tonight’s 100 free final after tying for the top seed with Australia’s Brittany Elmslie last night. If successful, Oleksiak’s win would mark the first gold medal of the meet for host country Canada. So far, she’s broken the Canadian Record in both prelims and semifinals, so she’ll look to lower her 52.19 record again in the final. In addition to Elmslie, she’ll also be taking on Italy’s Federica Pellegrini, the Netherlands’ Ranomi Kromowidjojo, and fellow junior standout Rikako Ikee (JPN).

Both the men and women will swim semifinals of the 100 IM tonight, which will feature World Record holders Vlad Morozov (RUS) and Katinka Hosszu (HUN). Morozov will be in semifinal 2 next to Japanese Olympic medalist Daiya Seto. Swimming in lane 4 of the first semifinal will be Team USA’s Michael Andrew.  Following the 100 IM semi, Morozov will return to the pool for the 50 free semis.

Hosszu has a big schedule tonight, but that’s nothing new for the Hungarian iron lady. This will be her 2nd swim of the night, sandwiched between the 200 back final and the 800 free final in her lineup.

Team USA’s Kelsi Worrell and Leah Smith both broke American Records in prelims of their respective events, and will look to lower them even further in tonight’s finals. Last night, Worrell broke the 200 fly American Record on the way to a silver medal. She followed that up with another American Record in this morning’s 50 fly prelims to set herself up as the top seed for semifinals. Smith, who cracked the American Record mark in the 800 free prelims yesterday, will go after that record again as she battles for gold in the final tonight.

Hard choice for the mixed medley. Is lily king good enough to throw her on breaststroke (even though it’s more common to use a male)?
Shields or Worrell on fly? Good conundrum to have.

As good as LK is she’s not that good. She has 100 and 200 br coming up so no point spending energy on this.

Bobo, could you please explain why you call any mixed relay a “useless event” beyond the fact that it is new and breaks from tradition? These mixed events give swimmers a unique opportunity to swim with members of their country they never would get to race with. They are an extreme test to the overall balance of a team, and they are a real test of coaching strategy with the order. One would think that it would make sense to have women do the fastest two legs (fly and free) so that the % difference that exists between men’s and women’s times translates to the least amount of actual time. But some countries have lights-out female backstrokers or breaststrokers that… Read more »

Hmm. Maybe. You know how Stravius swims since you’ve seen him compete a lot more than I have. Bronze medal chance?

My favorite in the 200 m breast also is Marco Koch —- he swam the fastest times in this event in the SC season in a row … and set a new world record in 2:00,44 … which is not yet in the FINA record lists … And I think Philip Heintz has a chance to medal in the 100 m IM.