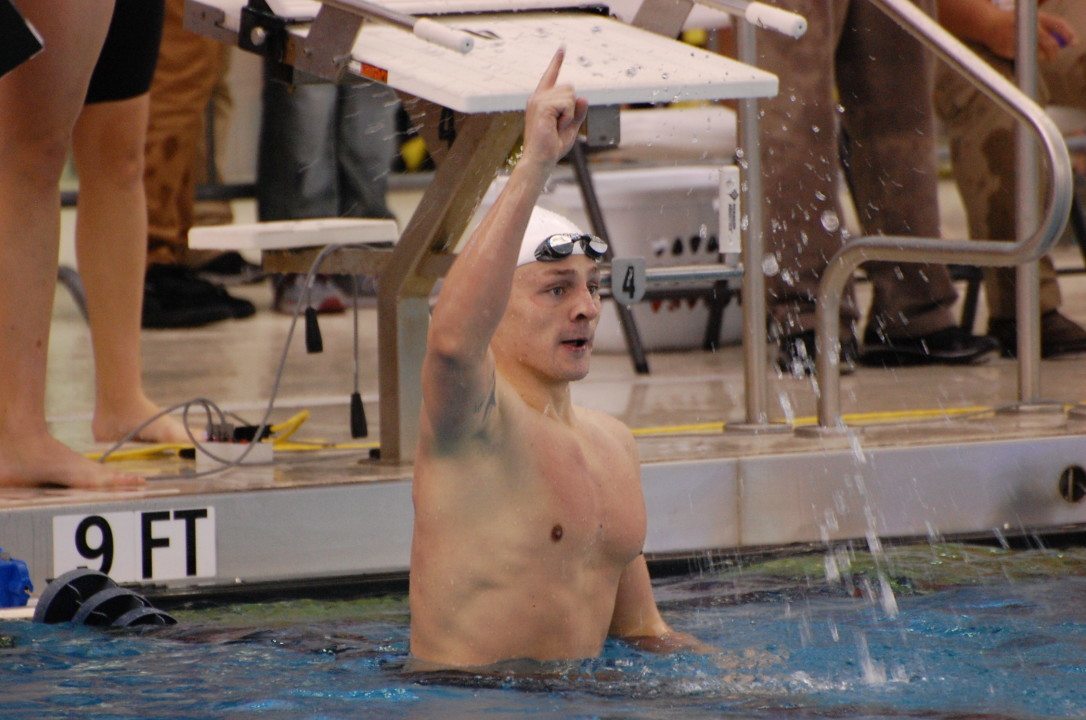 Joel Ax of SCAD Savannah broke his second NAIA national record in as many days with a 1:34.90 in the final of the men's 200 free on Day 2 of the 2016 NAIA National Championships. Current photo via Anne Lepesant

Even an upset victory in the 200 free relay and a national record in the 200 free for junior Joel Ax couldn’t propel the Savannah College of Art and Design past Olivet Nazarene University on Day 2 of the 2016 NAIA Men’s National Championship.

In addition to ONU, who improved 31 points from prelims to finals, Lindenwood-Belleville had an excellent Day 2 in Columbus, Georgia, improving their positions in all but one event and gaining 14.5 points on the day, with respect to their prelims finishes.

Top-seeded ONU freshman Daniil Kuzmin cracked a 3:55.53 to win the 400 IM over SCAD teammates Tyler Prescott and Connor Wilson. Kuzmin was out like a shot, building up a 2 body length lead by the fly-to-back wall. Prescott made up a little ground in the backstroke, but Kuzmin kept his distance with a strong breaststroke leg. Wilson, meanwhile, moved up a spot with his breaststroke and almost caught teammate Prescott in second. Prescott brought it home faster than anyone in the field, moving back in front of Wilson and nearly catching Kuzmin. In the end, it was Kuzmin with the win, Prescott a second back with 3:56.58, and Wilson another 3.5 behind with 4:00.18.

The entire A final of the men’s 100 fly all came to the wall less than a second and a half apart. SCAD senior Mark Shvartsman was the first out of the chutes, turning in 22.91. ONU junior Frank Tapia turned on the jets over the second half of the race and finished with nearly a half-body length lead, 49.04 to 49.45 for Shvartsman. Cumberlands junior Igor Dozortsev came in third with 49.52.

Two-time defending champion Joel Ax of SCAD Savannah was just off his NAIA record time in prelims, going 1:36.85, but having split 1:43.3 anchoring SCAD’s 800 free relay on Thursday night there was speculation he might lower his own record in for tonight’s final. Did he ever. Ax went out like a shot, and was already half a body length up on Lindenwood-Belleville’s Lucas Dengler-Harles by the 50. Dengler-Harles continued to push Ax, which turned out to be good for both of them. Ax finished strong and lowered his national mark by 1.8 seconds, settling it at 1:34.90.

Dengler-Harles came in second with 1:38.70. Cumberlands sophomore Vlad Khoroletc rounded out the top 8 with 1:41.10.

Calvin Price of ONU improved on his prelims time by .07 to claim the gold in the men’s 100 breast with 54.86. Wayland Baptist’s Bjoern Globke went 55.30 for second. Connor Wilson of SCAD out-touched teammate Anton Arvidsson by 2/100 for the  bronze medal with 55.79.

Given that ONU had won the 100 back, 100 breast, and 100 fly individual events, it wasn’t surprising that they would win the medley relay as well. SCAD Savannah made it a challenge though, putting Ax on the anchor. Down by a body length and a half, Ax nearly made up the distance over the 100 yards but fell just short and ended up earning the silver medal with his teammates. ONU finished in 3:16.19; SCAD, 3:17.14.

Third place went to Lindenwood-Belleville in 3:21.28.