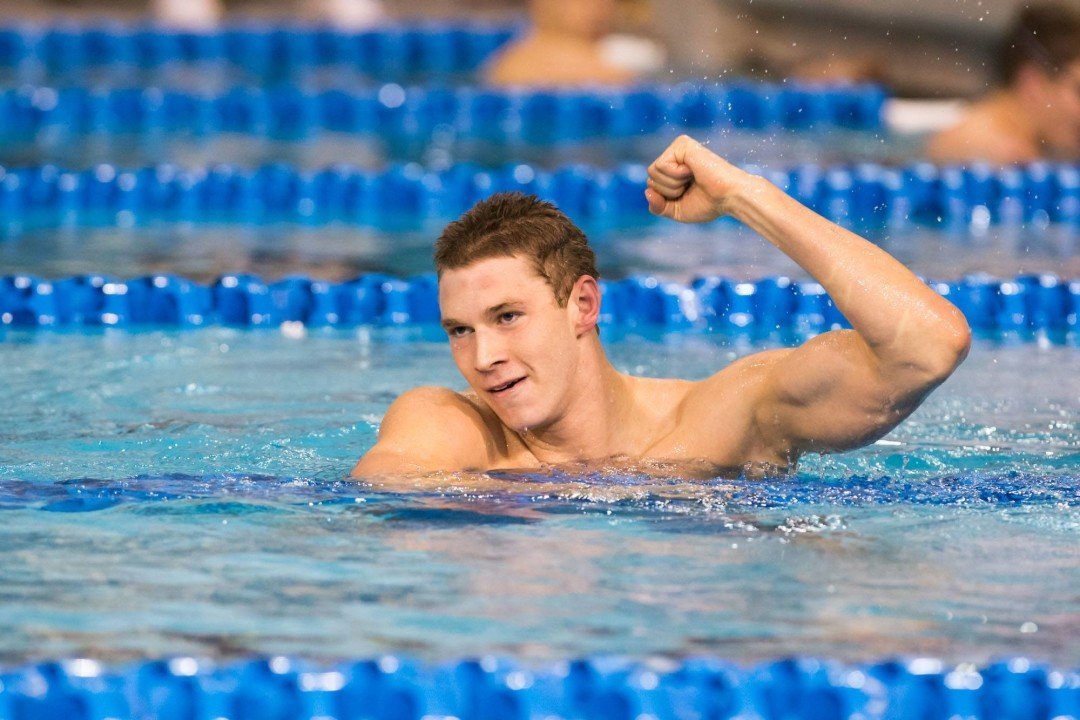 Ryan Murphy of Cal will look to win his third consecutive NCAA title in the men's 200 backstroke. Archive photo via Tim Binning/TheSwimPictures.com

California backstroker Ryan Murphy burst onto the college swimming stage at his first NCAA Championships, winning the 100 back and the 200 back. He went onto win the same two events last year in his sophomore season. He set the 200 NCAA record in his first year, and then last year he broke the NCAA record in the 100 and the American record in the 200. So what does he have left to prove? Murphy has little left to prove at the NCAA level, as his main test will come this summer at the US Olympic Trials and potentially the Olympics. With this being an Olympic year, everyone in the swimming world has taken their training to the next level. We should expect fast swims from Murphy at NCAAs, but how fast? The 200 back falls on the last day, which makes it a little more difficult to predict, but a new American record is certainly possible. Murphy and a few teammates recently swam at the Orlando Pro Swim Series rather than the Pac-12 Championships, so we don’t have an indicator as to where he is at in yards, but he still holds an NCAA best this season at 1:38.35 from December. Last year at that same meet he was nearly a second slower, so I presume he’ll win his third straight title and set a new record.

Currently ranked 2nd in the NCAA is Murphy’s Golden Bear teammate Jacob Pebley. Pebley also didn’t compete at Pac-12s so we don’t know exactly where he’s at in yards, but at the UGA Fall Invitational in December he swam a lifetime best of 1:38.86, over a second faster than he was at NCAAs last year and almost three seconds faster than he was at that meet the year previous. With that swim from December and his recent strong performance in Orlando, all signs point to Pebley dropping his best time down once again. Murphy is a difficult barrier to overcome, but Pebley is the front runner for 2nd place. Last year he was 5th in a very tight race where swimmers 2nd through 6th went 1:39, but Pebley is primed to be 1:38 or better. He’ll have to keep his eyes open however, as there were many fast swims recorded at the recent conference championship meets, including three guys under 1:40.

One of those men is Louisville’s Grigory Tarasevich who dropped a massive best time on his way to the ACC title in late February. Tarasevich took off over a second from his previous best time that he did at NCAAs last year and was over one and a half seconds faster than he was at ACCs last year. Tarasevich’s trajectory is pointing up, as he has constantly been improving. After missing the final at NCAAs last year, Tarasevich has put himself into medal contention and will be a major threat.

Tarasevich’s ACC rival is NC State’s Hennessey Stuart, who had his ACC title stolen away  by Tarasevich a few weeks ago. Stuart was an A-finalist last year at the big meet, but swam his all time best at the conference championships last year with a 1:39.37. We’ll have to wait and see if he can drop time at NCAAs or not this year, but he’s a medal contender no doubt. He sits 4th in the country this year.

The other man who has broken 1:40 this year is Stanford freshman Patrick Mulcare, who has had a great year for USC and is coming off a dominant performance at Pac-12s where he cruised to the 200 back title with the absence of Murphy and Pebley. Mulcare has consistently been putting up fast times all year, but had never broken 1:42 until Pac-12s where he joined the sub-1:40 club. If Mulcare can stay composed and not get overwhelmed by the magnitude of the meet, he could sneak in for a top-3 spot if someone slips up.

Those are the men who have broken 1:40 this year, but beyond them there are many major players lurking in the weeds. Auburn junior Joe Patching cranked out a personal best on his way to the SEC title in February, setting himself up for another championship final appearance at the big meet. Last year Patching ended up 8th, and will look to climb the ladder this year. Last year’s NCAA runner-up Sean Lehane of Tennessee only managed a 4th place finish at SECs, which may be cause for concern. Lehane had been 1:39.6 at the previous two SEC Championship meets, and followed up by dropping more time at NCAAs. Either Lehane was training through the meet or he’s in poor form. With it being the Olympic year, I’ll bet its the former. He’s certainly capable of medalling again, but he will have to be at or close to his personal best of 1:38.76 from last years NCAA prelims. Also looking fast out of the SEC is the Alabama duo of Connor Oslin and Christopher Reid, and Carter Griffin of Missouri. All three have A-final potential.

Patrick Mulcare isn’t the only freshman who could make some noise at the big meet, as fellow first year swimmers Ryan Harty of Texas and Justin Ress of NC State. Harty comes in ranked 8th in the country at 1:40.39, a time he swam in December. With Texas being the only large men’s swim team in the Big-12 the Longhorns didn’t have to prepare as much as some of their competitors did in the other conferences, likely giving them an edge at NCAAs. Harty cruised to the Big-12 title in 1:41.05, and will look to crack 1:40 for the first time at the big meet. Ress, ranked 10th, comes in after recording consecutive best times in prelims and finals at ACCs, ultimately placing 3rd in 1:40.57. Prior to the meet his best time was 1:44.71. Both these freshmen come in with a lot of talent, a lot of potential, but what they will have to prove is if they can execute it in the big moment. Scary as it sounds, it full well could take a sub 1:40 swim to make the championship final this year, and whether one or both of these guys can do that is up to them.

Also keep an eye out for Louisville junior Aaron Greene and seniors Jake Taylor (BYU) and Nic Graesser (UNC). All three have been 1:40 this season.

Dark Horse: Stanford sophomore Patrick Conaton had a breakout conference championship meet last year posting a best time of 1:40.48, but regressed back to a 1:42 at NCAAs. After experiencing the NCAA Championships once already, Conaton enters his 2nd meet with more experience and that could lead him to success. He has been 1:40.85 this year and would challenge for an A-final position with a best time.

I can definitly see Hennessey Stuart sneaking onto the podiom here and even getting a second to murphy. I think he has the talent and underwater to be up their. He also didnt fully rest taper and shave for ACC’s so I am will be expecting big things from Stuart

I believe Mulcare goes to USC….

Cal would be smart to give pebley a full taper and let Murphy not taper as much. Murphy has already proved his proficiency in SCY, and still has another year to lower the NCAA record even further. Cal needs to keep Murphy as fresh as possible for trials to make sure he makes the Olympic team in both the backstrokes. Assuming no huge upsets, I can’t see Pebley making the team this year. The 100 back is too deep and the 200 back is essentially on lockdown between Murphy, Lochte, and Clary. Let Pebley get the full taper for NCAAs and try and win both the backstrokes at NCAAs. I really doubt anyone is going to challenge Murphy and Pebley… Read more »

Except the entire purpose of these athletes getting a full ride to the school is to represent and compete for Cal Athletics. The swim program should not be taking any risks wen ensuring that they are prepared to score as high as possible. If an athlete wants to focus on trials, they should red shirt, or delay a year like Ledecky did.

Full ride??? I can promise you NO one at Cal has a full ride – not even Murphy. Trials is the focus for sure this year.