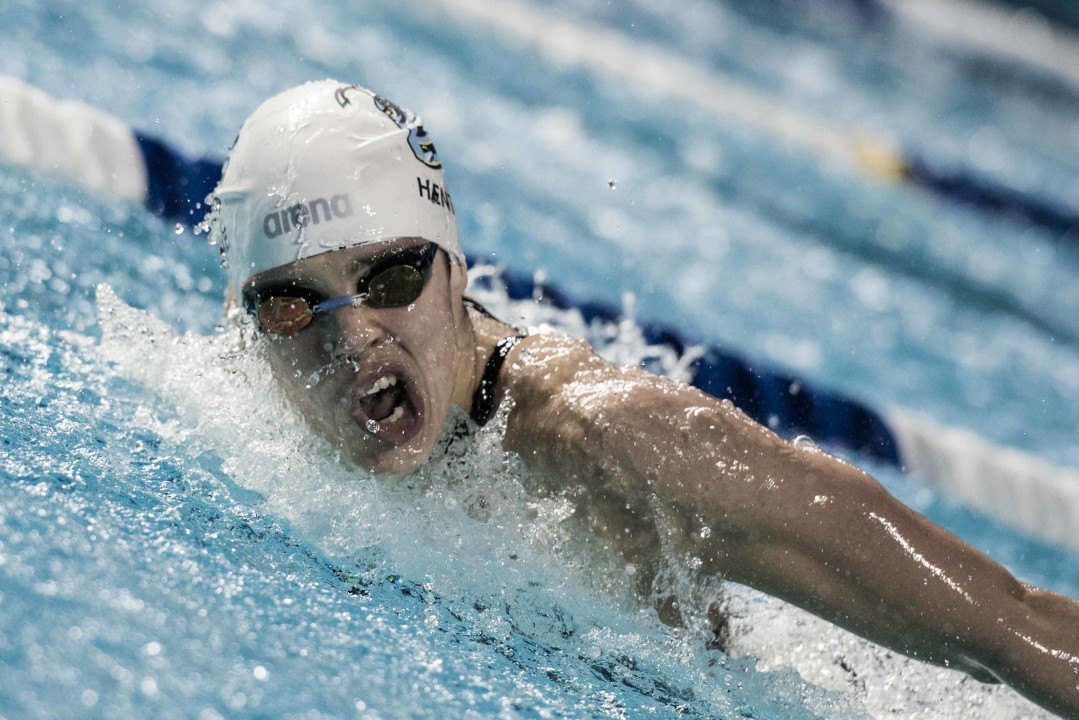 Reminder of Rio qualification process: The 2016 German National Championships are the first part of a two-step nomination procedure for the Olympic Games. The athletes had to swim defined times at National Championships in prelims and in finals. All swimmers who achieve the times will be part of the so called “long list” and must inform German Head Coach Henning Lambertz in the period of one week after German Nationals in which meet they want to confirm the required second part of the nomination process: at one of the three meets of the Mare Nostrum tour or the German Open. They can only choose ONE of these four possibilities. For this meet, other times are set which are approximately 1,5 % slower than those at German nationals. All swimmers who reach the times and have also finished first or second at the German National, will qualify for Rio.

Sarah Köhler earned the gold tonight in the women’s 800m freestyle, finishing atop the podium in 8:22.80. That easily surpasses the 8:28.76 season-best the Frankfurt swimmer entered the competition with, as well as her own lifetime best of 8:23.67 set in Kazan. With her performance tonight, Köhler now sits as the 5th-fastest swimmer in the world in the event.

Köhler’s outing sits beneath the 8:33.33 nomination time as well, but represented one of only two swimmers to do so. Silver medalist Leonie Antonia Beck hacked over 8 seconds off of her entry seed time to also register a Rio-worthy mark of 8:33.13, although she’s been as fast as 8:27.37 last summer.

With Anke Möhring’s 800m freestyle national record sitting at 8:19.53, Köhler came within 3 seconds of the mark, putting the record on notice.

Crushing the nomination time and crossing into sub-15-minute territory for the first time is 19-year old Florian Wellbrock, tonight’s 1500m freestyle winner. SC Magdeburg’s Wellbrock entered the meet with a personal best time of 15:08.05, but obliterated that mark by racing his way to the top of the podium in 14:55.49, well clear of the 15:02.37 nomination standard.

For Wellbrock, he’s now just over 5 seconds off of the legendary German National Record in the men’s 1500m event, that of 14:50.36 set by Jorg Hoffman all the way back in 1991. The teenager also cracked the world’s top 10 in the event, with tonight’s time checking in as the 9th-fastest this year en route to earning a new German Age Group Record for 19-year olds.

Joining Wellbrock in earning a Rio qualifying time was silver medalist Felix Auböeck, who also stopped the clock under the 15:02.37 threshold, although Auböeck competes for Austria. He nabbed a final time of 15:01.18 to crush his previous career-best of 15:05.48 set in Berlin.

As expected, veteran swimmer Franziska Hentke got the job done in the women’s 400m IM tonight, earning a gold medal-winning time of 4:38.56. That’s a lifetime best for 26-year old swimmer, whose previous fastest time ever was the 4:42.73 she registered in Berlin last year.

Although Hentke dipped beneath the finals nomination time of 4:38.96 by 4 tenths of a second, her time falls outside the world’s top 15 marks this season.

Also finishing on the podium tonight in the event was 16-year old Julie Mrozinski who wowed the crowd with a new German Age Group Record of 4:42.39. That hacks over 6 seconds off of the youngster’s previous career-best of 4:48.60 and also blew away the 4:52.43 she registered just a couple of months ago in Marseilles.

Rounding out the top 3 was Juliane Reinhold, whose 4:43.92 was enough to grab bronze tonight in Berlin.

Both the gold and silver medalists tonight were able to notch times under the 4:16.37 finals qualifying standard, beginning with top swimmer Jacob Heidtmann. His outing of 4:13.25 was off his 4:12.08 mark from Kazan, which now stands as the German National Record, but was enough to qualify and hold off a charging teenager in Johannes Hintze.

At just 16 years of age, Hintze already has a stellar history in this event, having clocked the 2nd-fastest time ever for a 14-year old in the 400m IM event at this meet 2 years ago. Tonight, Hintze’s performance of 4:14.72 fell just .65 of a second short of the World Junior Record of 4:14.07 held by Brazlian Brandonn Almeida. Instead, the German will settle for a new National Age Group Record.

Womens 800 free:
Köhler 8:22.80
Beck 8:33.13
Both are “prequalified” now, Beck only 0.2 faster than the required time, basically like i predicted, she isnt in a very good shape.
Köhler more than 5s faster than last year at the same meet, she then went on to swim 8:23 at the world championships …

Live results? Could you please send me a link?