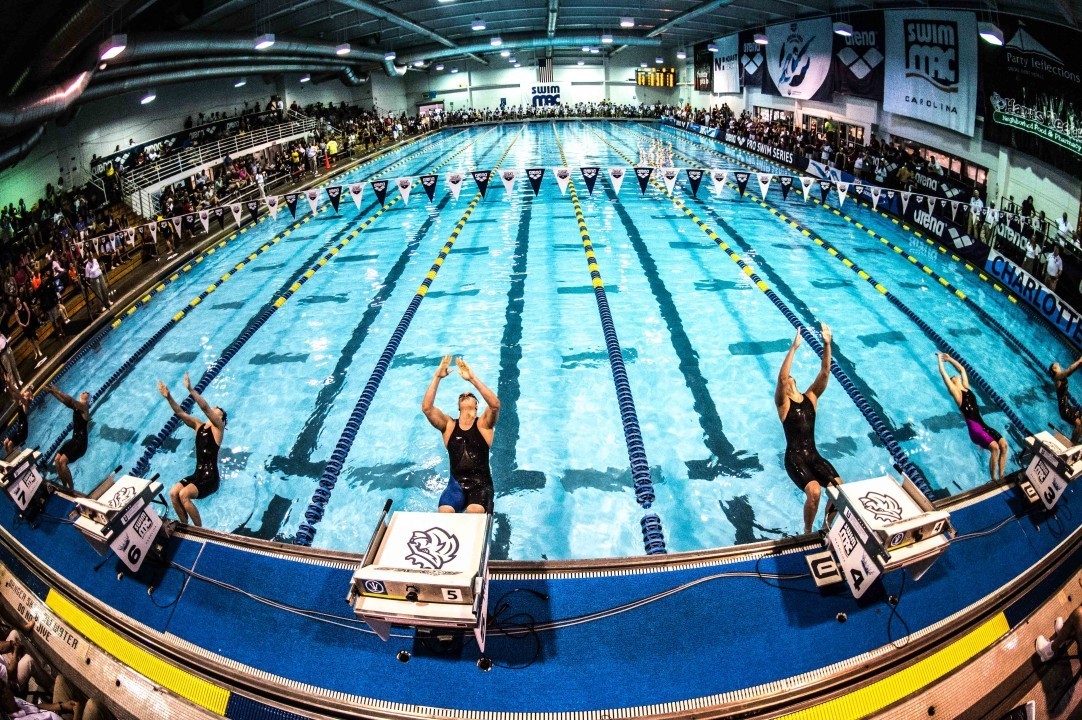 The defending champion UMBC turned a slim deficit into a huge lead on the third day of the 2016 CCSA Championships. They did it with depth, putting swimmers in finals across the board to build a solid 100+ point lead heading into the final day. Meanwhile, Florida Gulf Coast continued to win events and have all but closed the door on second place Liberty.

Last year, London Schumacher of Gardner-Webb qualified first in prelims but finished just third in the finals. This year, she left nothing to chance, seizing the lead on a strong backstroke leg (1:01.8) that put enough distance between her and second place Christina Elmgreen of Florida Gulf Coast.

Defending champion was Alona Kyselova of Incarnate Word was disqualified for a false start, but given her splits would have only finished fourth anyway.

David Moore defended his conference title, breaking his own conference record along the way. The Incarnate Word junior also posted a time that should put him in contention for NCAA selection. He led a 1-2-4-5 finish for UIW. This was their best event of the night.

UMBC was able to put swimmers into the final as well to stem the bleeding, and would turn a corner after this race.

Fanny Teijonsalo may be in contention for more than just the top newcomer in the league. After breaking the conference record twice yesterday in the 200 IM, she posted a dominant win in the 100 butterfly. Teijonsalo’s time probably also puts her on the bubble for NCAA qualification.

FGCU was able to put three swimmers in the top eight to Liberty’s two, ensuring that they would build their lead.

The final day of the meet will determine whether Gardner-Webb’s Nathan Lile or Incarnate Word’s David Moore is swimmer of the meet. Right now it’s neck and neck, with Lile matching Moore’s performance earlier in the session. The Gardner-Webb senior used a quick 1st 50 (21.5) then held off a charging back half from Reed Matthews of ODU.

Both swimmers cleared the two year old league record. Lile’s title backed up his win the previous year. UMBC was able to put three swimmers in the final.

Teijonsalo’s biggest competition for swimmer of the meet will come from within her own team. Elise Haan broke a CCSA record with her 200 freestyle win.

After missing out on a chance to defend his 50 freestyle crown the day before, UMBC’s Gregor Sporlein left nothing to chance with his prelim swim. He followed with a nearly identical race to his 2015 victory. He used superior pacing to overcome an early deficit to FAU’s Matthieu Burtez.

With defending champion Katie Armitage of FGCU disqualified in the morning, teammate Evita Leter stepped up and won anyway. Leter improved more than a second over 2015, and led the entire way for the win.

Morgan Rulevich had one of the best results for relatively new UNC Asheville, finishing fourth.

Last year this event was one of the biggest reasons for the UMBC win. The Retrievers took 2nd-5th place in 2015. This year, senior Leo Endres moved up to first, with his teammates filling in 5-7th places.

Defending champion Andrey Chechelnytskyi was unable to progress from a year ago and finished second. Old Dominion was also able to put two swimmers in the final.

Elise Haan pulled off her second victory of the evening with ease. She also kept the title for Florida Gulf Coast, with defending champion Kira Toussaint having moved on to Tennessee. Katie Latham followed her up to give the top two spots to the Eagles. They also nabbed fourth in this race as they expanded their lead.

It looked as if Connor Bos of Gardner-Webb would defend his conference title as he boomed out to nearly a second lead in this event. However, Florida Atlantic’s Hunter Swartsel outsplit him by over a second to pass him by for the win.

UMBC did not medal but once again scored big with three swimmers in the A Final.

There was little question as to whether Florida Gulf Coast would win this event, after they captured all of the stroke 100’s on the day. However, two factors were in play for FGCU- getting a relay A time and a conference record. While they scored the latter, they came up agonizingly short on the first.

Elise Haan broke Kira Toussaint’s conference record on the opening leg. Armitage, Teijonsalo and Latham followed with the fastest splits in the league the rest of the way. The team was over ten seconds ahead of their closest competitor. They were, however, .03 short of the A time, meaning they still cannot bring relay only swimmers to the NCAA championship.

Nathan Lile broke yet another conference record, his third of the meet, leading off Gardner-Webb’s 400 medley relay. He swam 47.15 to give his squad an early 1.5 second cushion.

Unfortunately for Gardner-Webb, Old Dominion as well as UMBC and Incarnate Word took charge from there. Old Dominion won comfortably, mainly off another good 100 fly from Reed Matthews.