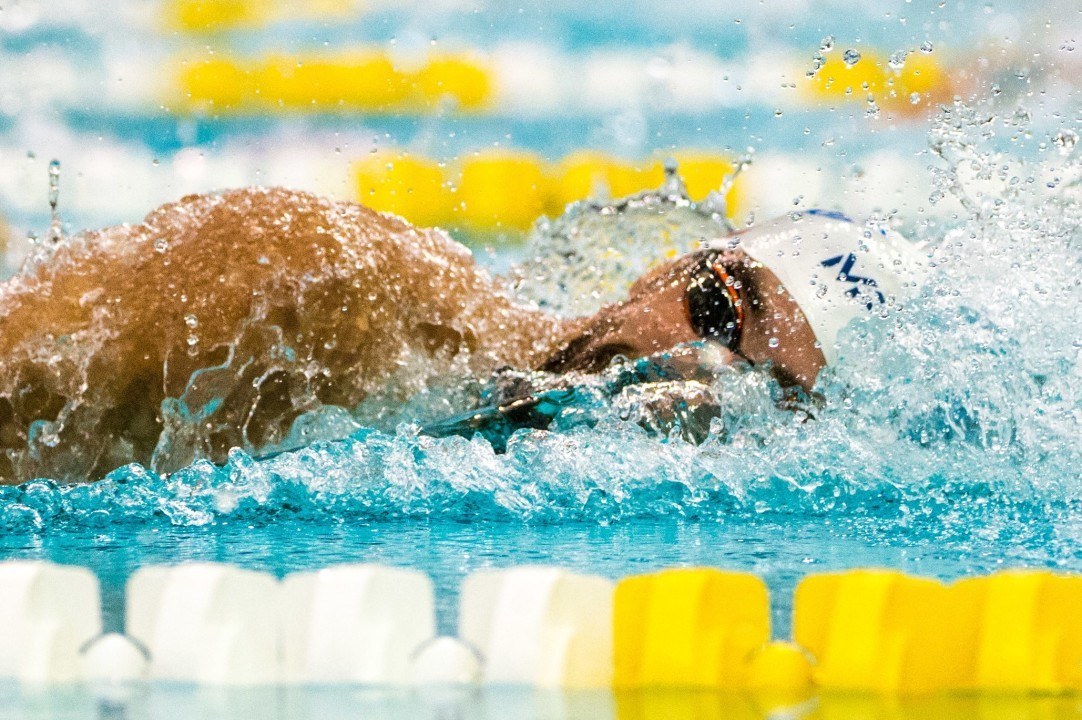 Follow along for live updates from the first day of the 2015 AT&T US Winter National Championships in Federal Way, Washington. Archive photo via Mike Lewis/Ola Vista Photography

North Baltimore’s Allison Schmitt took it out and controlled the race from the first turn. She was 2:02.0 at the halfway mark and ultimately touched in 4:06.88, by far her best performance since 2012 Olympic Games in London. As a comparison, Schmitt was sixth at U.S. Summer Nationals with 4:09.59. Schmitt remarked after her race that she was just happy to be under 4:10; she crushed that goal. This swim ranks her sixth in the world so far this season, just ahead of Katinka Hosszu:

Conor Dwyer, representing Trojan Swim Club, swam a solid race to earn the national title in the men’s 400 freestyle. He was about a half a body length ahead of Ryan Cochrane and Michael McBroom at the halfway mark, and came to the wall with more than a two-second cushion at the end. Dwyer touched at 3:48.11, 2.3 seconds faster than he had been in the morning. Island Swimming’s Cochrane held onto the second position and finished with 3:50.15. The Woodlands Swim Club’s McBroom was third in 3:50.50.

Matias Koski, who represents Finland internationally and Georgia collegiately but is swimming with Dynamo here, dominated the B final. He clocked a 3:49.37 to win the consolation.

Maya DiRado of Stanford Swimming had a superb finish to edge California Aquatics’ Caitlin Leverenz for the national title in the women’s 200 IM. DiRado led handily after the backstroke leg, but Leverenz made up some of the distance in the breaststroke. DiRado held onto her lead, though, and brought it home for a final time of 2:11:10 to Leverenz’ 2:11.79. Right behind DiRado and Leverenz throughout most of the race was Cal/SwimMAC’s Kathleen Baker, who wound up third in 2:12.13.

Stanford freshman Ella Eastin, who swims for SOCAL Aquatics, was the consolation winner with 2:13.79, just ahead of Elizabeth Beisel of Bluefish Swim Club (2:14.26) and Miranda Tucker of Indiana University (2:15.41).

Michael Phelps of North Baltimore, seeded fourth after the morning’s heats, controlled the final from start to finish. He was out first with the butterfly and had built his lead to 1.3 seconds by the halfway point. His teammate Chase Kalisz, who has one of the strongest second halves in the game, outsplit the entire field in the breaststroke, gaining a second on Phelps. Phelps was still a second up on the field heading into the freestyle, though, and he was able to hold on for the win, splitting the second-fastest free overall. Phelps’s final time was 1:57.61, 2 seconds faster than in Minneapolis last month. Kalisz earned the silver medal with 1:58.77.

After that it was a wave of finishers: Eduardo Solaeche of Gator Swim Club, who was the only one in the field to outsplit Phelps in over the final 50 freestyle, touched third in 2:00.14. North Baltimore’s David Nolan came in at 2:00.15, while Michael Weiss of Wisconsin Aquatics was 2:00.19.

In the consolation final, South Africa’s Dylan Bosch and Sebastian Rousseau looked like they would battle it out to the finish, but University of Michigan’s Evan White, swimming out in lane 8, stole their thunder. White split a 33.9 breaststroke and took over the lead; he was able to hold on down the final stretch and won the heat in 2:01.79. Bosch and Club Wolverine’s Kyle Whitaker tied for second in the heat with 2:01.98.

The future of American sprints faced off in the middle of the pool during the final of the women’s 50 free: Abbey Weitzeil of Canyons Aquatic Club, who had posted the morning’s fastest time, and Simone Manuel, the only American to crack the world’s top 10 this summer. Pushing them from the outset was California Aquatics’ Natalie Coughlin, who had an excellent start. It was Manuel, though, whose mid-pool acceleration took over. She ended up with the win in 24.83; Weitzeil was second in 24.86. Cal’s Farida Osman got the bronze medal with 25.22, while Wisconsin Aquatics’ Ivy Martin edged Coughlin, 25.26 to 25.27 for fourth.

Lia Neal of Stanford Swimming got the touch in a hotly-contested consolation final; she won in 25.25 over Cal’s Amy Bilquist (25.33) and SwimAtlanta’s Madeline Locus (25.48).

American record-holder Nathan Adrian overcame a less-than-stellar start to outpace the field in the men’s 50 free. He nailed his finish for a 21.76 win and the sixth-fastest time in the world this calendar year, and the second-fastest time for the 2015-16 season. Second place went to Brad Tandy of Tucson Ford, the only other sub-22 second 50 free in the field (21.87). Canyons Aquatic Club’s Santo Condorelli eked out the bronze over New York Athletic Club’s Josh Schneider, 22.04 to 22.05.

Trojan Swim Club’s Vladimir Morozov grabbed the B final victory in 21.86; he was half a body length in front of the field. Second place in the heat went to Kristian Gkolomeev of University of Alabama (22.44). Erik Risolvato, swimming for Puerto Rico, was third with 22.49.

Hackett held on for about 150m but faded badly. I doubt this is anything but an in season meet for him.

I had to go back and watch that swim. It looks like it hurt. A lot.

Right, and he started training with Phelps and Bowman just recently as well, so I imagine a coaching/training shakeup right before a big meet doesn’t help a ton. I’m not concerned about Hackett, he’ll have a good 200 this summer.

Phelps, Kalisz, and Nolan in that order? The training partners will get it done tonight, however for all I know they might not be rested. Hoping we see a 1:57.

1:57.61….Looked OK other than that backstroke/breastroke transition.

He was happy with the time so must not be rested, but does appear to be shaved as far as I can tell on this poor quality feed.

Rowdy Gaines was saying that he probably mistimed the turn and was unsure where the walls was.