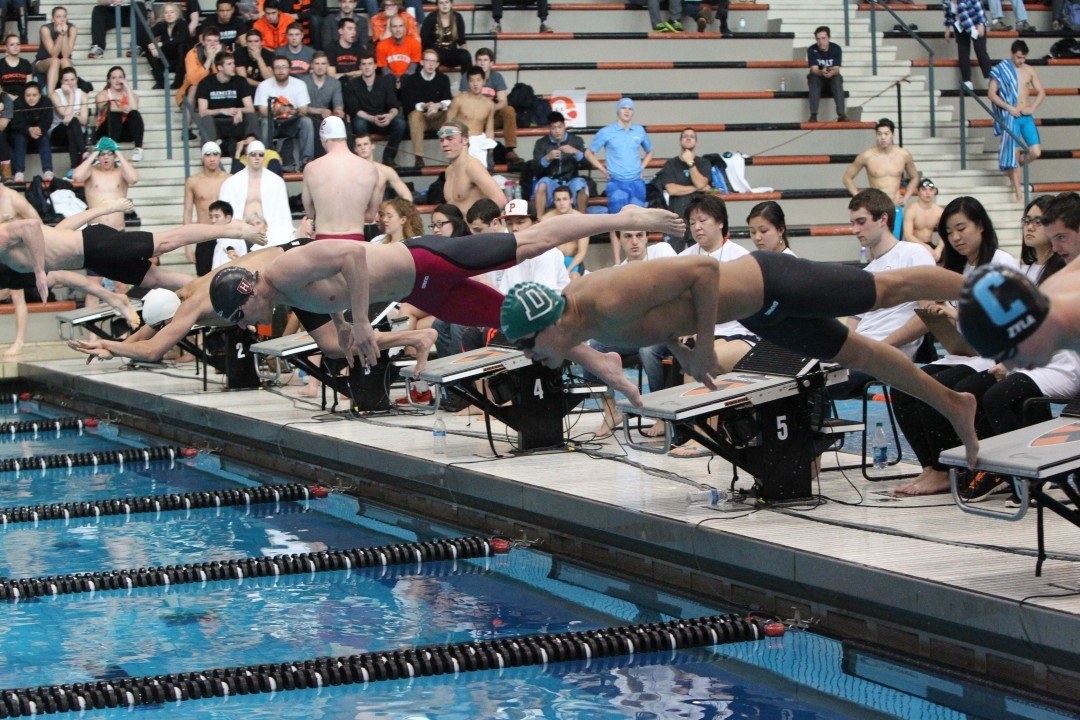 Two things are clear after a day and a half at the 2015 Ivy League men’s championship: this year’s meet is fast, and Princeton wants to win at home. Harvard had a far stronger Day Two prelims, but the top performing team of the day was Columbia, who loaded up A, B and C finals across the board.

Princeton only entered two swimmers in the 400 IM but when you’ve got Sam Smiddy and Corey Okubo, that’s all you need. Smiddy broke the pool record with his prelims swim of 3:45.85. Okubo came to the wall second, just .03 behind. Christian Yeager of Harvard posted a 3:48.15 in the first heat to qualify third. Kei Hyogo (3:49.24) of Yale edged Penn’s Grant Proctor (3:49.55) for the fourth spot; Proctor had the seventh-fastest time. Both Harvard’s Christian Carbone and Columbia’s Kevin Quinn were fifth with 3:49.34. Columbia’s Jae Park also made the championship final with his 3:51.75 morning swim.

Columbia dominated the 100 fly, getting 3 into the A final, 1 in the B, and 2 in the C. The Lions’ David Jakl smoked a 46.27 for a new school record and the top qualifying time. Teammates Terry Li (47.80) and Alex Ngan (47.92) qualified sixth and seventh, respectively. Max Yakubovich of Harvard had the second-fastest time of the morning with 47.13. His teammate Steven Tan came in fifth with 47.65. Princeton’s Zach Buerger went 47.38 for third, Mike Lazris of Yale was fourth with 47.55, and Penn’s Michael Wen tied Ngan’s 47.92 for seventh.

This was one of the events we were keeping our eye on. Jakl has been poised near the top of both the 100 and 200 fly for 3 years; he is motivated to make the most of his last Ivy championships, as we saw from his morning swim, nearly a second faster than Yakubovich’s.

This was Harvard’s second-strongest event of the meet last year with 147 points, twice as many as their nearest opponent. This year the Crimson still have the potential to score the most points, but the margin has been greatly reduced by Princeton’s 3/1/1.

After winning on the 1-meter board last night, Harvard’s Mike Mosca was the top qualifier in 3-meter diving with 3478.80 points. Columbia’s Jayden Pantel was second with 354.40. Princeton’s Nathan Makarewicz and Michael Manhard qualified third and fourth with 331.65 and 321.20 points, respectively. Harvard got two more top-eight divers in addition to Mosca: Bobby Ross (316.05) and David Pfeifer (306.60). Johnathon Schlafer of Brown (302.55) and Brett Gillis of Dartmouth rounded out the championship final.