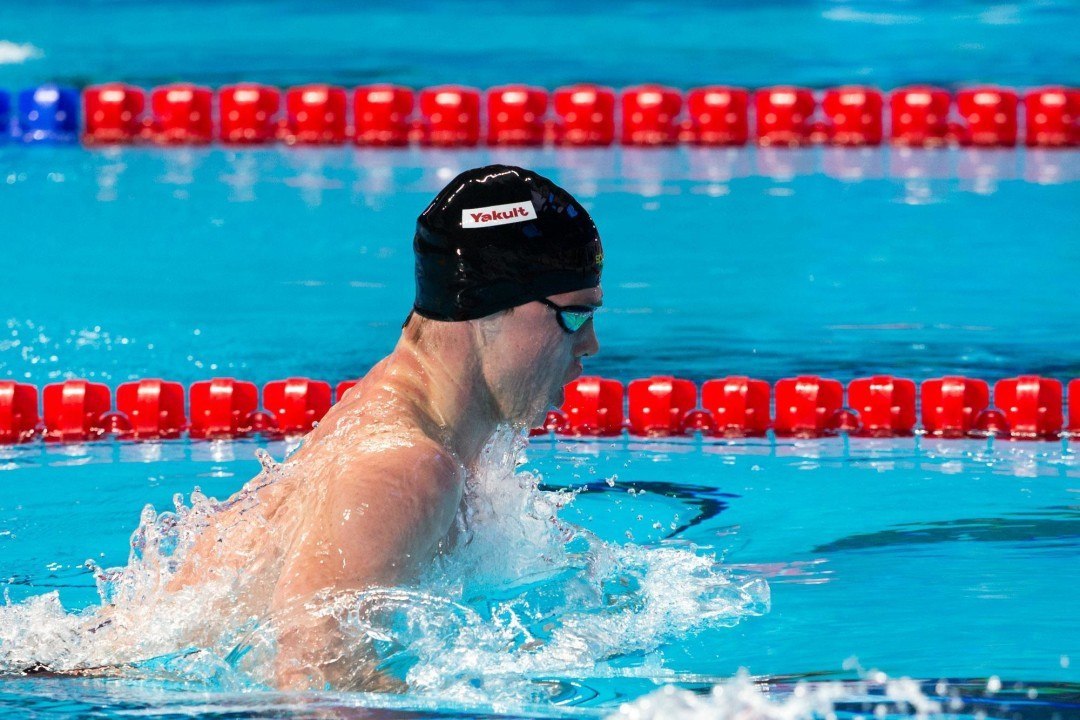 Five events were swum in the prelims on Saturday morning, including a top-seed in the 50 breaststroke from American Kevin Cordes, who is based out of Singapore. Archive photo via Tim Binning/TheSwimPictures.com

Updated since original publishing. Per the Team Leaders Meeting, heats are now scheduled to begin at 10am local/10pm Eastern. For events with 25+ swimmers, the competition will run with heats in morning/finals at night.  For events with less than 25 swimmers, the events will be swum as timed finals. The 10 fastest swimmers will swim in the evening, the remainder during morning heats.

Full details on the adjustments to the competition can be found here.

Five events were swum in the prelims on Saturday morning which included the men’s 100 freestyle, 50 breaststroke and 50 butterfly as well as the women’s 50 backstroke and 50 freestyle.

Katsumi Nakamura of Japan was the second fastest qualifier in the 100 freestyle recording a time of 49.79. Nakamura currently holds down the world’s fastest time in the event having posted a 48.55 at the Japanese Inter Collegiate Championships. He also took home gold in the event at the World Cup stops in Hong Kong and Beijing.

American Kevin Cordes led the way in the men’s 50 breaststroke hitting the wall in a time of 27.83 followed by Australian Matthew Treloar who recorded a 27.86.

Renato Prono of Paraguay was the third fastest qualifier putting up a time of 27.97 setting a new national record breaking the previous record of 28.05 set by his brother Genaro Prono in 2009.

On the women’s side Australian Cate Campbell was the fastest qualifier in the 50 freestyle finishing in a time of 24.88. She was followed by Bronte Campbell who posted a 25.14 and Jeanette Ottesen of Denmark who finished in a time of 25.28.

Australian Emily Seebohm was the top qualifier in the 50 backstroke hitting the wall in a time of 28.28. Bronte Campbell had the second fastest qualifying time of 28.39 followed by fellow Australian Holly Barratt who recorded a 28.54.

Hungarian Katinka Hosszu and American Missy Franklin were the next two fastest qualifiers. Hosszu posted a 29.04 while Franklin touched in a time of 29.08.

Finals for tonight cancelled due to psi being high

This being the air pollution index from the forest fires in Indonesia .