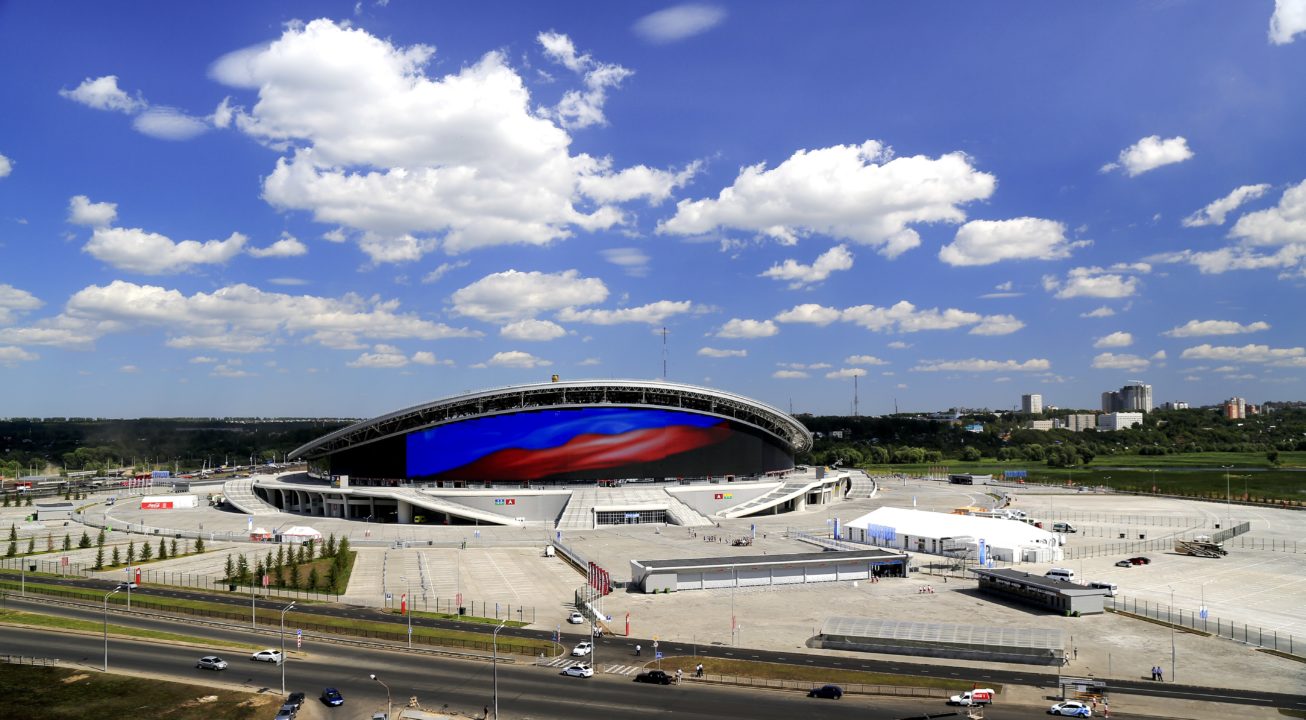 The newly constructed Kazan Arena will sport both temporary pools and a temporary roof for the 2015 World Championships. Archive photo via Stanislavgubaydullin

Since the 2009 Rome World Championships, FINA has shied away from hosting major World Championship and Olympic meets in outdoor venues. They still, however, insist on holding them in large venues to allow maximum attendance at the meets, and this can become rather complex, as there are not many permanent pools in the world built for north of 10,000 fans, which means that the World Championships have often reverted to being held in indoor basketball or volleyball arenas.

But Kazan, Russia has gotten even more creative than that. They built a huge aquatics center for the 2013 World University Games, but the Aquatics Palace only holds 4,200 seats. The Russians, intending to get more than one use out of that great pool, had to find a way to bring the World Championships home, and though that 4,200 seater isn’t enough for swimming at Worlds.

That brand new Kazan Arena, constructed for the WUG’s and the city’s Premier League soccer team, has 45,000 seats and is built for soccer, but has no roof and no pools.

And so, for this event, a temporary roof will be constructed on the arena so that it will meet the requirements of FINA for hosting World Championships. This opens a whole new door of possibilities for hosting major FINA events: no longer is swimming building just temporary pools for their major events, but now even temporary roofs.

It will feature two pools constructed on the field in the arena, and the capacity will be reduced to 12,000 for Worlds.

That facility will be one of at least 5 that will be used across the disciplines of the 2015 championships. The 4,200 seat, three-pool Aquatics palace will hosting water polo, synchronized swimming, and diving; The 1,000 seat, 50-meter pool in the Burevestnik will host the men’s water polo group games; the 1,000 seat, 50 meter Olymp will host the women’s water polo group games; while several other pools like the Orgsintez (50 meter pool) and Akcharlak multi-sport complex will host training. The Kazan Rowing Center, which seats 3,260 on the bank of Sredniy Kaban lake will host the open water swimming, and no venue has been announced yet for high diving.

This is getting totally out of control. They just built a brand new swimming arena:

That is better suitable for World Championships than a football pitch. In Swimming you need to get spectators as close to the pool as possible, because swimmers are in water. You can’t see anything from highest seats of a football stadium.

The size of the stands is not that relevant either. The most important thing is that the stands are packed, creating good atmosphere while looking good on TV too. 8000 spectators in a partially empty stadium is worse than 5000 spectators in the sold-out arena.