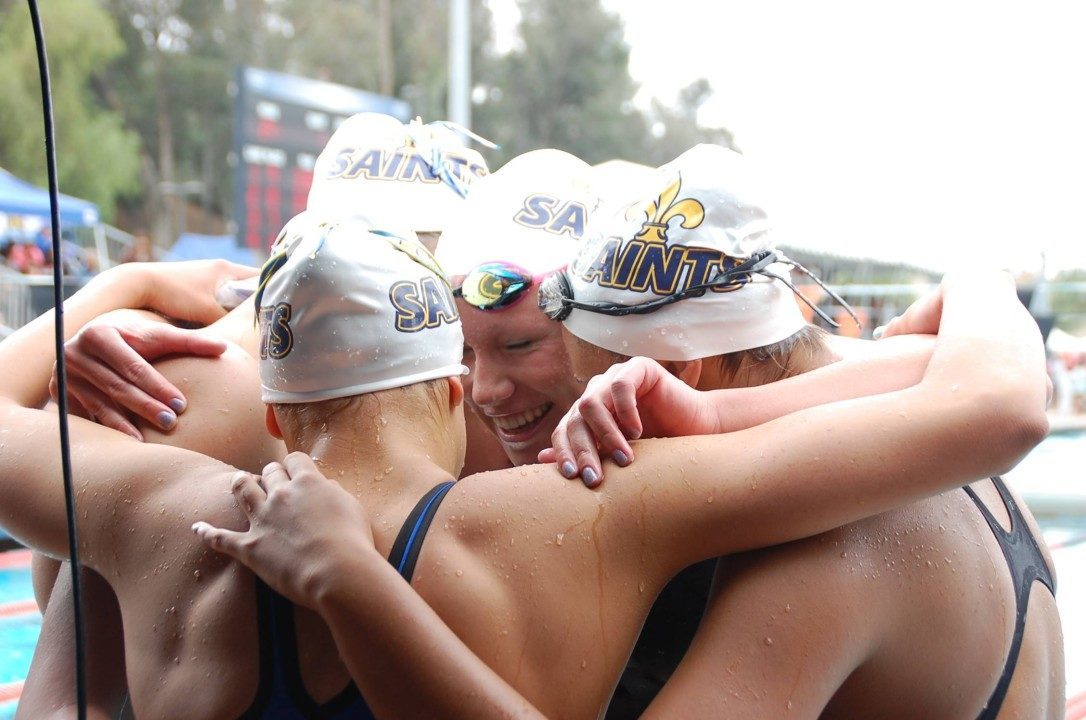 The inaugural CIF State Swimming and Diving Championships, bringing together for the first time the 10 sections that make up the high school sports scene in California, turned out to be quite exciting. Despite a lack of depth (most of the “B” finalists didn’t even make the meet qualifying time standards), there were fast, competitive races in a number of events that produced California’s first “state champions.” The girls’ meet featured a tight team race between Southern California’s JSerra and Crean Lutheran, while Northern California’s Northgate boys dominated the boys’ meet.

The bonus of participating in a first meet is that every event winner establishes a state meet record that lasts a whole year. Immaculate Heart senior and Northwestern-commit Olivia Rosendahl set the first 2015 meet mark in one-meter diving with 517.50 points. South Carolina-commit Mikaela Lujan from Nevada Union was runner-up with 492.85, just ahead of Palo Alto’s Mimi Lin (489.85).

Kenisha Liu of Ayala jumped out to an early lead in the 200 free, already putting a half-body length between herself and top-seeded Jennifer Campbell of Gunn by the 50 wall. Liu maintained the lead through the 150, when Campbell began to close on her. But in the end Campbell ran out of pool and Liu got the win, 1:46.14 to 1:46.43. Jordan Anderson of Granite Bay came from behind to eke out a third-place finish in 1:49.18. Liu also won a stunning photo-finish 100 free as well. She touched out JSerra senior and future Stanford Cardinal Kaitlyn Albertoli by .04, 49.22 to 49.26, while freshman Izzy Henig of Castilleja came in third with 49.55. Albertoli went a life-time best 22.67 to win the 50 free over Paly’s Zhao (22.79) and Elise Garcia of Crean Lutheran (23.15).

Maddie Murphy of Carondelet pulled off an upset in the 100 fly, overcoming favorites Brittany Usinger of Acalanes and Amy Okada of Beverly Hills with a monster second half, outsplitting the entire field by nearly a second. Murphy, whose fastest time had previously been 53.77, very nearly broke 53 seconds, winning in 53.01. Usinger (53.56) and Okada (53.84) rounded out the podium.

In the 500 free, JSerra’s Karli Thuen pulled off an incredible final 200 to move from third to first. Her winning time of 4:48.06 was a lifetime-best by 4.8 seconds. Sarah Nowaski of West Hills placed second with 4:48.28, while Granite Bay’s Anderson, a Utah commit, notched another third with 4:49.11.

Oak Ridge sophomore Bryce Mefford, La Costa Canyon’s Liam McCloskey and Robert Guerra from Fallbrook gave the crowd a great show in the 200 free, trading stroke-for-stroke nearly the entire race. Mefford broke away with the all-important-third-fifty, and the other two were never able to make up the ground. The trio finished 1:37.08-1:37.48-1:37.75, respectively. Mefford doubled with a win in the 100 back, nearly even-splitting his 48.13 and passing Benjamin Ho of Saint Francis (48.75) and Angel Alcala of Cerritos (49.03) over the last 50.

Los Altos junior Albert Gwo won the sprint freestyles; first he blasted through the 20-second barrier for the first time, winning the 50 free in 19.90. Porterville senior and USC-commit Kyle Grissom also went a lifetime best, finishing second with 20.43. Northgate’s Tittle, yet another UCSB commit, was just .02 back in 20.45, also a lifetime best. Then Gwo won the 100 with 44.60, another personal best. De La Salle senior Dominic Dalpiaz, a San Luis Obispo-commit, placed second in 44.88, just edging Liam O’Haimhirgin from Bella Vista (44.90).

The boys saved the best for last, putting on one of the most exciting finals of high school 100 breast in the country. San Ramon junior Poppe (55.22), Corona del Mar senior and future Princeton Tiger, Tyler Lin (55.25), Serra senior and UCSB-commit Joe Kmak (55.27), and Heritage senior and Arizona State-commit Daniel Comforti (55.33) touched virtually together.

Hats off to Northgate! Glad to see a public school succeed when competing against private schools that have no recruiting boundaries or limitations. It takes a team effort to overcome loaded teams from private schools. I also hope this meet becomes better attended and eventually grows into a ‘can’t-miss’ event for the swimmers across the state.

It might be time for the those complaining that certain sections aren’t given enough entries to actually learn the qualification rules for this meet. Every section was given a set number of automatic qualifiers regardless of time. This was to guarantee that swimmers from every section would have a chance to participate. The second way to qualify was to swim make the time standard in either finals or console finals at your section swim meet. So, theoretically, South Section could have qualified up to 80 swimmers in each event, 5 Divisions x 16 finals swimmers. So for the love of God stop complaining about how the South Section got short shrift. Every fast swimmer in Southern California had an opportunity… Read more »

I think the reason they did points is because they wanted to crown a boys and girls state champion its same in track and field and more traditional team sports like Volleyball and Basketball. I didn’t see anything wrong with that. Yes, your right we keep mentioning who was not there, but young Xie and Eastin and other swimmers did really well. A national indept record in the 4 x 100 freestyle relay is not bad.

I’d hoped that Central Section 100 Butterfly record holder Kyle Grissom would do better, but one explanation is that it’s Event #12 and his other is the earlier 50 Free Event #10 where he did a lifetime best of 20.43. It could be that Kyle gave his best shot in the 50 Free but only had perhaps 10 minutes of recovery before the start of the 100 Fly.

There was a 20 minute awards break after the 50 free. The meet was very well paced with several breaks to allow sufficient rest.

Kyle is from a small town in Central California where he doesn’t have the benefit of the experienced coaching and facilities. Probably was tapered wrong. If he keeps his nose to the grindstone when he gets to USC, he should do well!

Yeah let’s focus on the fast times not repeat over and over that swimmers weren’t there. There were some great swims at this meet.

I do question the point of a team point total. It doesn’t seem fair when each section is inviting a different amount of swimmers per event based on side. If this meet is going to be an invitational instead of having time standards to get in I question the legitimacy of a point total.

I mean based on size, not side

Actually there was a time standard. Anyone who bettered the standard in their sectional meet could attend, making it fair for all comers.

Actually, the writer of the Orange County Register sports writers admitted that some of the northern swimmers would have beaten the southern swimmers. Northgate swam the medley Relay within the time of University. There were only three or four swimmers from the Southern sections that would make it more competitive anyway. Crean Lutheran girls swam the medley relay faster than Jserra did in the division 1 or Santa Margarita did.

despite the fact that a lot of southern section teams did not attend I thought this meet was a huge success. As a coach of a southern section doc 2 team that was just honored to be a part of the meet I thought there was an incredible effort to make the meet feel like a national level meet. I felt like it was a huge succes. The focus of the aftermath of this meet should be on who was there and what they accomplished not on who wasn’t there.

Kind of a lackluster meet when many of the best teams and swimmers from CIF SS did not even participate.