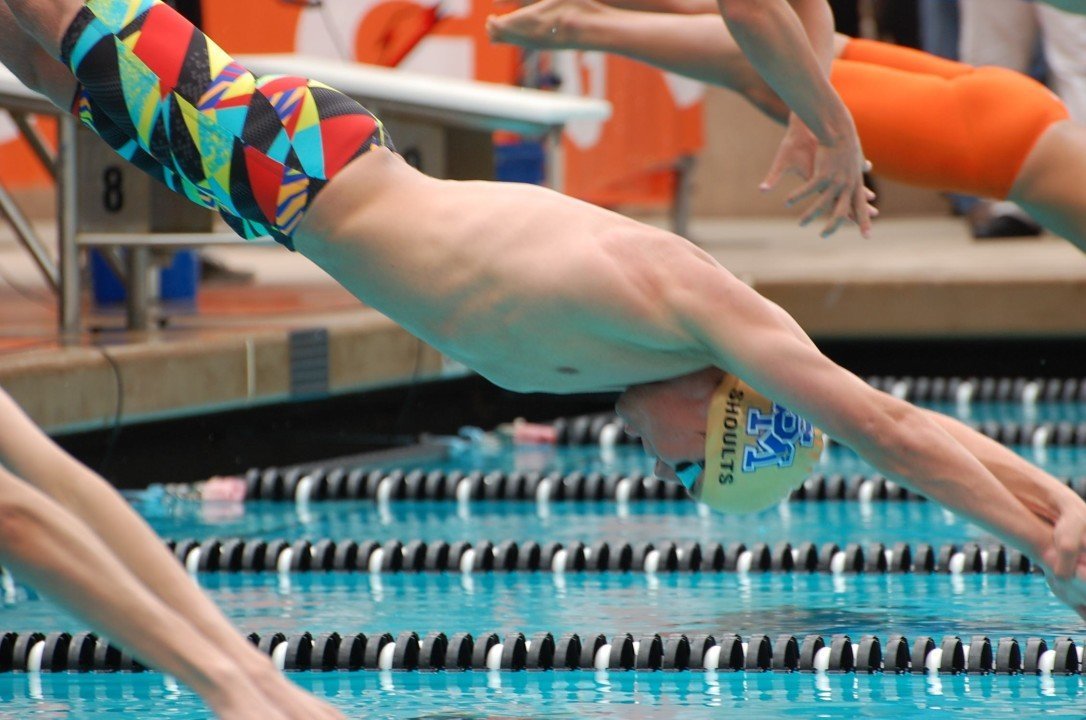 When you walk onto the pool deck at the CIF-Southern Section Division I championships, you expect to see national high school records being broken. That may seem unreasonable, but given the enormous talent residing in the region, it isn’t irrational. And even in the off-year that you don’t get to watch a national record going down, you are still going to see section records falling.

This year was no different. Already in prelims, Sonia Wang of JSerra and Abbey Weitzeil of Saugus had given us a preview of what was to come. Wang broke the Division I record in the girls’ 200 IM, going 1:58.28, while Weitzeil broke a pair of national high school records: the 50 free with 21.83, and the 100 free first with 47.53, then later leading off the Saugus 400 free relay in 47.42.

But that was just prelims. The fireworks really exploded in finals, when a much larger cast of characters got in on the act.

Before the swimming even began, several schools were already on the scoreboard thanks to diving. Capo Valley sophomore Camryn Hidaldo successfully defended her 2014 title by winning the 1-meter event with 588.80 points, an improvement of more than 50 points over last year. Carly Sherwood-Souza of West Ranch (564.55) was runner-up, while San Clemente’s Haley Farnsworth (527.15) repeated with another third-place finish.

What a fitting start to a championship meet.

Flintridge Sacred Heart senior Kirsten Vose broke the 200 IM meet record set in prelims by JSerra senior Wang, going 1:56.07, her best time by more than 3 seconds. Vose, who had never officially been under 2 minutes before 2015 CIF prelims, dropped an entire second off each leg of the race, from her second-place finish at last year’s meet. She not only had the fastest breaststroke split in the field, but came home in an astonishing 28.0, not something she is normally known for. 2014 champion Nikol Popov finished second with 1:58.78; Wang was third in 1:58.85.

And then came one of the most anticipated moments in the meet: Abbey Weitzeil’s 50 free. The Saugus senior, who had set the national public school record last year with her first sub-22, 21.98, had lowered the record to 21.83 in prelims. In finals she cracked a 21.64, finishing a full 1.5 seconds ahead of JSerra’s Kaitlyn Albertoli (23.11) and Katherine Wagner of Alemany (23.33).

After the diving break, in which pulses all around the Riverside Aquatics Complex returned to normal, out came Katie McLaughlin of Santa Margarita, ready to take up the gauntlet of the 51.98 Corona del Mar freshman Eva Merrell threw down to lead the qualifiers for finals in the 100 fly. McLaughlin had set the national high school record last year with 51.78, but Beata Nelson had lowered it to 51.78 at the Wisconsin high school meet in November. But that’s just the kind of thing McLaughlin enjoys, and she went after reclaiming her crown with gusto. Out in a 24.35, McLaughlin came home in 27.1 to touch the wall at 51.53 for a new national mark. Merrell was second with 52.14; Hart’s Mik Ranslem finished third in 53.86.

Woodbridge senior Georges went 4:48.56 to defend her title in the 500 free. Just a tad off her 2014 winning time, Georges set the pace throughout the entire race, consistently holding 29-lows. Brittany Kampfer of Mater Dei had a nice back half to pull away from JSerra’s Karli Thuen; they finished second and third with 4:49.94 and 4:52.83, respectively.

Defending champion Popov of Valencia won the 100 breast with the only sub-1:00 performance of the day. Flintridge Sacred Heart’s Vose took second, while Meagan Popp of Corona del Mar was third (1:02.32).

The boys’ side of the meet was just as exciting.

In a terrific show of depth, the top six in the 200 free all finished under 1:39.Santa Margarita junior Grant Shoults led the way with a lifetime-best 1:34.54 (his first sub-1:35); Capo Valley’s Nick Norman (1:37.34) and Servite’s Stephen Marcin (1:38.39) placed second and third, also at their personal bests. Shoults and Norman, training partners at Mission Viejo in club swimming, traded stroke for stroke in the 500 free. Shoults kept a slight lead on Norman throughout, and with just a bit more firepower over the last 50, ended up winning by 1.5 seconds, 4:15.56 to 4:17.00. They both finished well under the D1 mark established by Ian Prichard in 2000, and Shoults broke the national independent school record with his swim. Marcin of Servite was third in 4:23.95.

Just like to mention that University boy’s won back to back titles in fairly convincing fashion. Harkens back to the MV teams from a few years ago. They were able to overcome the departure of Okubo this year but next year with Hofstadter, Howard, Takahashi and Tran leaving….

According to SwimPhone and the Meet Announcer, Ventura High School girls took 8th place at this meet and they did it with 6 girls.

Cole Cogswell had stellar performances in the 50 and 100, coming close to Joey Hale’s 50 free record and Dera Buyucuncu’s 100 free record. Tom Shield’s 200 free record will stick around until at least next year when Grant has a shot at that.

Best individual performances of that meet.

GIRLS
Abbey Weitzeil’s 50 free in 21.64 and 100 free (lead-off leg of the relay) in 47.09. Interesting to note that once again, she swam her best 100 free time in the relay and not in the individual race. Last December it was the same at… Read more »

Bobo, Great point about Weitzel constantly breaking her own records on relays! I hadn’t realized until I read your comment what an amazing relay swimmer she is, and how valuable that will be for Team USA!