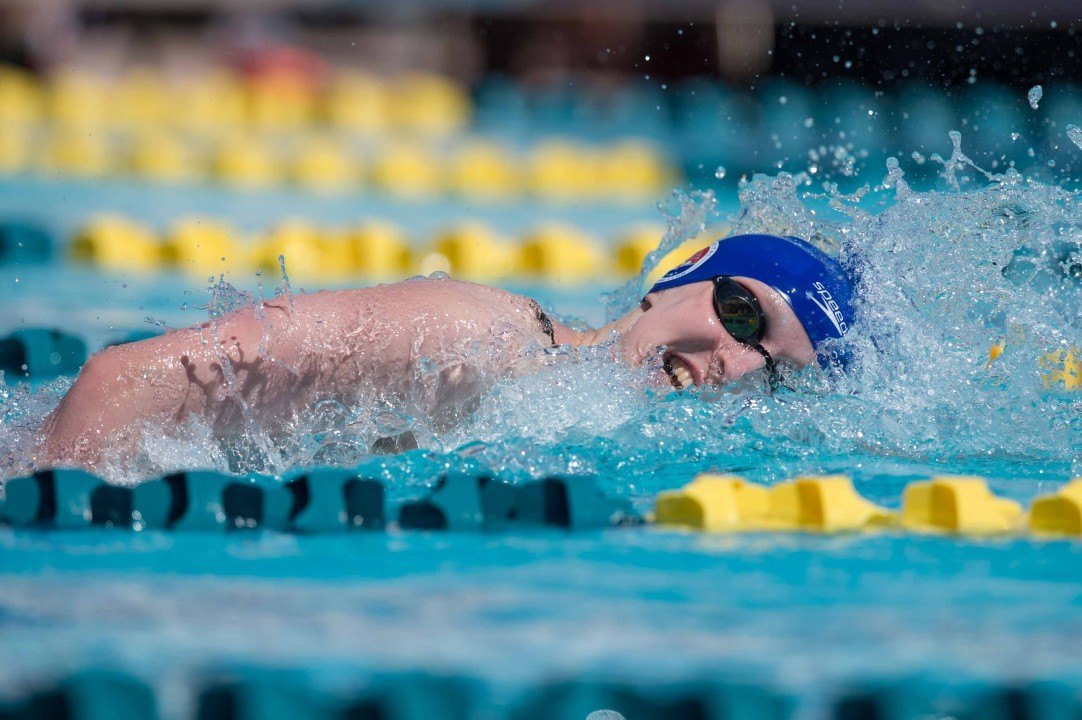 We are expecting some great racing on the final night of the Arena Pro Swim Series Mesa. With a Phelps-Lochte matchup in the 200 IM, a couple of Hosszu-Coventry battles, Katie Ledecky in the 800, amongst other highly anticipated events, we should have a great evening of fast swimming.

Another great final from Katinka Hosszu. Hosszu got out early, building up a .8 lead over Caitlin Leverenz, and a 1 second lead over Katie Hoff, at the 100. Hosszu and Leverenz split the breaststroke about the same but Hoff gained on them both. Hosszu made the final breast-to-free turn and took off; no one was able to challenge her down the final 50. Hosszu touched in 2:11.40. Leverenz finished second with 2:12.59, while Hoff took third with 2:13.82.

The much-anticipated showdown between Michael Phelps of North Baltimore Aquatic Club and Ryan Lochte of SwimMAC was an excellent race that might have gone either way. Lochte led by 3/100 after the fly, extending it to 6/10 after the back. Phelps looked like he might make up ground on the breast, but Lochte kept his lead. Meanwhile Conor Dwyer had moved into second by 3/10. The three leaders turned for home, and finished in the same order. Lochte won with 1:58.70. Dwyer was second in 1:59.04. Phelps picked up the bronze with 2:00.01.

Not quite a half hour after their 200 IM final, Hosszu and Coventry were back in the middle lanes for a 200 back final. But it was 14-year-old Taylor Ruck from Scottsdale who looked like she might upset the veterans, turning at the 100 wall 2/10 out front. The second half belonged to Coventry, though. She came back 7/10 faster than Coventry and 1.1 seconds faster than Ruck. Coventry got the win in 2:12.05, with Hosszu just behind in 2:12.14. Ruck made it in at third with 2:12.28.

Arkady Vyatchanin of New York Athletic Club dominated the 200 back final, clocking the seventh-fastest time in the world so far this year, 1:56.95.

Arianna Vanderpool-Wallace moved into 16th place in the world rankings with her winning time of 54.18. She was out by about a body length at the 50, and finished 1.2 seconds ahead of second-place Allison Schmitt of North Baltimore (55.35). Abbey Weitzeil of Canyons, swimming unattached, was third in 55.59, .02 in front of Margo Geer of Tucson Ford.

Nina Rangelova of Southern Methodist was fifth in 55.69, 1/100 ahead of Mission Viejo’s Katie McLaughlin. Seventh went to SwimAtlanta’s Amanda Weir in 55.85, while Isabella Arcila of SMU took eighth in 56.44.

Who knew that the race of the night would be the 100 free? We were all focused on the Phelps-Lochte showdown in the 200 IM, but where it was really happening was in the 100 free. Josh Schneider of New York Athletic Club, the 50 free champion, was the first to turn at the halfway mark, but the entire race would play out over the second half.

Four competitors were under 24 at the 50; four were over. And the last of them were Lochte and Phelps. As they pulled even with the leaders over the second half, it quickly became anyone’s race. And then came the touch. When the waves settled it was Phelps in 49.72; Lochte in 49.77. Dwyer had a strong back half as well, and finished third in 50.22.

Katie Ledecky of Nation’s Capital did what she does best – she jumped out to an impossible lead by the 50 and just kept building from there. Ledecky was under world record pace for about the first half of the race, but ended up with 8:13.02. North Baltimore’s Lotte Friis came in second with 8:31.65. Kristel Kobrich took third in 8:41.06.

The fourth-fastest time overall belonged to Tjasa Oder of Tucson Ford, who went 8:48.28 in the morning heats. Madelyn Donohoe of The Fish (8:51.93) and Valerie Gruest of Guatemala (8:51.98), also from the morning heat, placed fifth and sixth.

Top-seeded Michael McBroom of The Woodlands was in control of the men’s final from the beginning to the end; he won with 15:09.20. That’s good enough for the 16th fastest time in the world this year.

Ledecky continues to amaze me. She’s so consistently fast!! I must have missed something but wondering why Manuel/Coughlin scratched the 100 final; turned what could have been a good race into a snoozer. Not a great way to build a fan base for these Pro Swim series. Great to see Katie Hoff slowly dropping her times and getting back in the mix. Coventry also having a decent comeback so far. Phelps and Lochte about where I thought they’d be at this point.

Apparently they all had flights to catch

Liquidassets, I don’t know about Manuel. But Coughlin tweeted that she had booked an earlier flight under the impression that finals would start at 5 p.m. (as in previous years), not 6 p.m.

Anybody why Megan Romano didn’t swim?