2014 U.S. National Championships: Day 4 What to Watch For 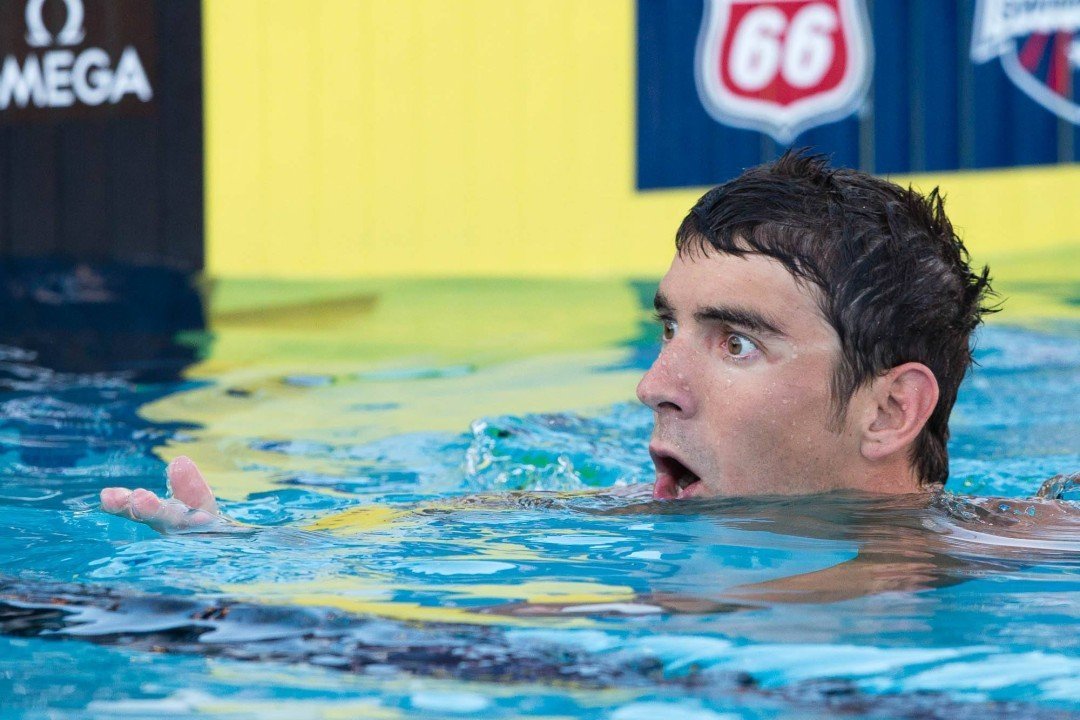 Michael Phelps has held firm on his entry in the 100 backstroke for Saturday. Current photo via Tim Binning/TheSwimPictures.com

The Info You Need to Follow Day 4’s Prelims in Real-Time at the 2014 U.S. National Championships from Irvine, California

There were quite a few scratches on the 4th day of this meet, as swimmers begin to get a better idea of where they stand in their training and endurance.

The biggest news is that the two headliners of the IX3/Seal Innovation Team squad have pulled out of the 400 freestyles – Chloe Sutton from the women’s race, and Charlie Houchin from the men’s race. Neither swimmer was having a great season, though Houchin did look like he was peaking at the right time – he swam well at the Bulldog Grand Slam a month ago, and had a solid swim earlier in this meet in the 200 free.

Sutton, meanwhile, was well off of the pace in her first two races, the 200 free and the 800 free, and didn’t look like she’d be close to a qualification in the 400 either. She was entered as the 2nd seed, and swam the event for the U.S. at Worlds last year.

Other scratches from the women’s 400 free include Quinn Carrozza (16th seed), Tristin Baxter (17th seed), and Shannon Vreeland (18th seed). On the men’s side, the #5 seed Conor Dwyer scratched, meaning that two of the top five on the psych sheets are out of this race. Dwyer has been solid at this meet and has done just enough to make the team, but not good enough where he was likely to win the 400 free with Connor Jaeger and Matt McLean racing very well. With his ticket to Australia stamped, Dwyer can try again at this 400 free at Pan Pacs.

Katie Hoff has scratched out of the 100 breaststroke where she was the 9th seed. Hoff has now scratched from two of her three entries, and so will put all of her marbles into the 200 IM basket on Sunday.

Scott Weltz and Andrew Seliskar, the #8 and #19 seeds respectively, scratched the men’s 100 breaststroke – with neither having another race to swim. Junior National Champion Amy Bilquist has dropped the women’s 100 backstroke.

Things to Watch For on Saturday

Hardy has the speed, and Lawrence has the endurance, but Larson has the best balance of the three.

We’re also keeping an eye on Bethany Galat, who is following in Larson’s footsteps at Texas A&M. The Indiana native is one of the top two breaststrokers entering the NCAA this year, and looks like she has the same athletic build as Larson.

And make one other addition – Michael Phelps, the greatest swimmer of all time, who has held his entry in the 100 back for now.

Throw that on top of Ryan Murphy, David Plummer, Shane Ryan, Olympic silver medalist Nick Thoman, and a field that goes 20 deep with National Team level guys, and everyone better take care in prelims to not miss the boat.

i think Phelps will be in top 2 in this event & would love to see him swim it at big meets. 😀
Go MP!
no Nick Thoman & Ryan Lochte??

Seal Innovation Team didn’t work out for Chloe, should have stuck with MVN!

Katie should have done 200 Breast and 100 I think her breaststroke has improved a lot. Oh well, she better make it in 200 im now!