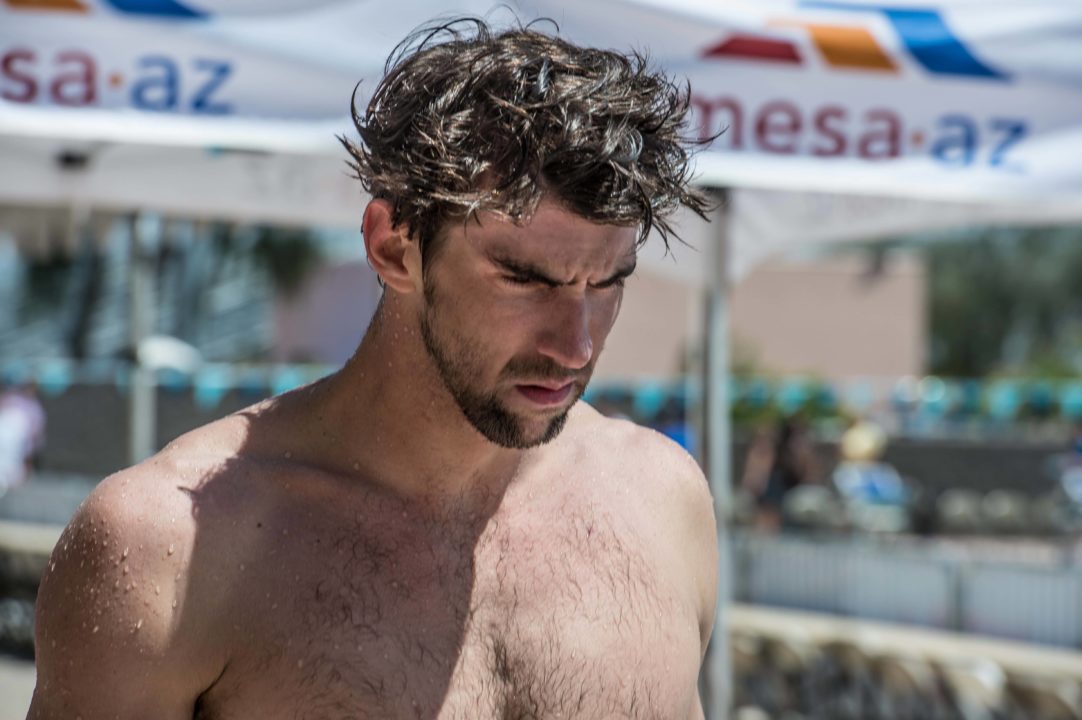 It's time for Michael Phelps to get down to business in Mesa. Current photo via Mike Lewis/Ola Vista Photography

We’ve taken a look at Lochte’s 200 freestyle race from two Grand Prix events, just as we did with Phelps’ 100 butterfly.

Damir Dugonjic won the 100 breaststroke at the 2014 Mesa Grand Prix.

On Thursday morning, the focus on Michael Phelps’ return at the Mesa Grand Prix will cross over from ‘what has happened’ to ‘what did happen,’ as the Greatest of All Time competes in his first competitive race since the 2012 London Olympic with the prelims of the 100 fly.

That’s just one of many great stories on this day. The women’s 100 free is absolutely stacked, with a field going 30+deep in recognizable names. Depending on who shows up big, that could be the best race of the entire meet in just the first event.

Also watch Breeja Larson race in the 200 breaststroke for the first time as a pro, and Kevin Cordes get his first long course action of the season a month after being named the CSCAA Male Swimmer of the Year for the second straight season.

The races to be swum on day 1 are the 100 free, 200 breaststroke, the 400 free, and the 100 fly, in that order. All will be swum as a single A-flight, with the exception of the 400 free which will swim 4 men’s heats and 5 women’s heats as a B-Flight after the completion of the rest of the prelims.

Fresh off an astounding short course season, 17-year-old top seed Simone Manuel displayed an excellent balance of early speed and closing ability to win the final circle seeded heat, touching in 55.06 to earn the number one spot heading into finals.  Manuel (and the rest of the field, for that matter) was down early to Natalie Coughlin, who exploded off the blocks and took the early lead in the final heat, flipping in 26.21 at the 50 mark.  Although Coughlin was a half second faster than Manuel going out (fastest in the event at 26.21), the high school senior from First Colony Swim Team reeled her in down the stretch.  Coughlin settled for a tie with Amanda Weir for third in 55.43, still putting her in a good lane for tonight’s final.

Between Manuel and Weir/Coughlin was Olympic gold medalist Allison Schmitt of North Baltimore.  Competing in her first meet since the Austin Grand Prix in January, Schmitt really laid the hammer down on the final 50, closing in 27.99–the fastest in the field–to finish in 55.11.  That’s a great prelims swim for Schmitt, who admitted in an ESPN article that she hasn’t been training at her usual level until relatively recently.

U.S. World Championship team members Megan Romano and Katie Ledecky grabbed the next two spots.  Romano finished in 55.44, just 0.01 behind Weir and Coughlin, while Ledecky cruised through her first 50 before coming home the way a sub-4:00 400-freestyling-woman should (27.53-28.09 were her splits) to touch in 55.62.

Margo Geer, who just closed her great NCAA career as an Arizona Wildcat, and Cheyenne Coffman rounded out the top 8 in 55.88 and 55.95, respectively.

Katie Hoff also looked great in her long course comeback debut, finishing ninth out of lane one in 56.04.  It’s been a big week for Hoff; the 24-year-old now training at Hurricane Aquatics also got engaged earlier this week.

Although it was announced yesterday the first race of Michael Phelps’ much-publicized comeback would have to wait a couple more hours after he elected to scratch this event, the top eight finishers in the men’s 100 freestyle is loaded with plenty of familiar faces that will lead to a great race tonight.

Reigning Olympic champion Nathan Adrian was challenged over the final 50 by fellow Olympian Ryan Lochte, but the Cal Bear had too much early speed (he was out in 23.60), touching with a final time of 49.98.  Lochte, who sits fourth at 50.25, was over a half second back at the first wall, but closed that gap quickly with some excellent underwater work.

Fellow Florida Gator alum Conor Dwyer took the second spot out of the first circle seeded heat in 50.17.  That’s off his season-best 49.39 from the Austin Grand Prix, but still a very solid prelim swim.

The big (and only, really) surprise in the big final tonight will be Matthias Lindenbauer of Louisville.  The 20-year-old from Dortmund Germany was out pretty slow (24.65) before roaring home in 25.72 to cut 0.07 off his lifetime best to jump up to 5th overall with a time of 50.37.

Barring scratches, Darian Townsend (sixth, 50.44), Jimmy Feigen (seventh, 50.48), and Josh Schneider (eighth, 50.52) will be the other three A-finalists tonight.  All three are training under the “New York Athletic Club” moniker at this meet.

The morning field of the women’s 200 breast wasn’t particularly impressive, but with eight finalists who are all some combination of Olympians, World Championship athletes, or NCAA champions, we could see something impressive tonight.  Micah Lawrence from SwimMAC Carolina, the only swimmer under 2:30, will be in lane four tonight as the first seed after her 2:28.37 morning swim.

Raminta Dvariskyte jumped from her tenth place seeding up to fifth with a 2:33.65, clipping her season-best 2:33.70 from the Austin Grand Prix.  USC’s Stina Gardell is sixth in 2:33.69

A pair of World Championship Team members, Caitlin Leverenz and Laura Sogar, round out the field.  Both were well off their personal bests, but have all of the talent to put together an outside smoke tonight.

Following the DQ’s (BJ Johnson), declared false starts (Kevin Cordes, Martin Liivamagi), and no-shows (Tommy Brewer) from many of the top seeds, Azad Al-Barazi from Trojan Swim Club ended up as the first seed in 2:16.40, a best time for the former University of Hawaii swimmer who competes internationally for Syria.  Al-Barazi out-touched Mike Alexandrov, another swimmer who has Trojan ties, finished second in 2:16.54.  Like many other big-name swimmers at this meet, Alexandrov is now competing for New York Athletic Club, as well.

Prep swimmers Carsten Visserling (who has many NAG records in his name) and Gunther Cassell were seventh and eighth in 2:21.23 and 2:21.55, respectively.

No surprise here: world record holder Katie Ledecky dominated the field, finishing in 4:05.27, nearly four seconds ahead of second place.  The 17-year-old swimmer from Nation’s Capital looked smooth and controlled en route to her heat win, getting out in front early like usual (58.38 going out) before settling in over the final 300 (1:01.81-1:02.51-1:02.56).

Virginia’s Leah Smith, coming off her breakout freshman season as a Cavalier, finished third in 4:10.23.  Venezuelan national record holder Andreina Pinto snuck ahead of Chloe Sutton and Elizabeth Beisel to finish grab the eighth and final spot in 4:15.31.  Sutton touched in 4:15.85 for ninth, while Beisel was tenth in 4:15.91.

Results of final heat were not available at this time.

Top seed Claire Donahue looked great coming off from her recent three-week training stint in New Zealand, finishing in 59.56.  Leveraging her blazing early speed, Donahue was out in a field-best 27.79, and also closed the race pretty well (her 31.77 was the second fastest in the field).  16-year-old World Junior gold medalist Katie McLaughlin and 18-year-old NCAA third-place finisher Marne Erasmus of SMU were the closest competitors, tying for second in 1:00.04.

26-year-old Colombian national record holder Carolina Colorado cut nearly a full second off her seed time to finish fourth in 1:00.48.  Looking back, that appears to be Colorado’s top time since the 2008 Olympic Games, and likely is the fastest non-super-suited swim of her career.

Two swimmers with unique comeback stories filled the next two spots this morning.  In her second swim of the morning, Katie Hoff continued her long course comeback with a very solid 1:00.67 for fifth place.  Like Colorado, that’s Hoff’s fastest swim since 2008.  Amanda Kendall, who made her return at the Austin Grand Prix earlier this year, finished sixth in 1:00.74.  Andrea Ward of Gaucho Aquatics and Kathleen Baker of SwimMAC Carolina, one of the fastest prep swimmers in the history of this event, finished seventh and eighth in 1:01.04 and 1:01.31.

He’s baaaaaaack.  In the first comeback swim for greatest swimmer and Olympic champion of all time, Michael Phelps earned the top seed in 52.84, with friend and competitor Ryan Lochte just behind in 52.94.  Both Phelps and Lochte stuck to their traditional strategies, cruising through the opening 50, rocketing off the turn wall, and kicking it into another gear down the stretch.  Just to give an idea of how fast they came home for a preliminary Grand Prix race, here’s their splits, alongside the rest of the top eight:

Only Godsoe, the second U.S. representative in this event at Worlds last summer for Team USA, was within eight tenths of a second of Lochte or Phelps coming home.  Stay tuned for a bigger breakdown of this event in a separate post.

On a side note, Fort Collins Area Swim Team have had the fans (or fan) of the session so far… Tessa Thull and Bailey Kovac… props to you and your rowdy fans in the stands.

WRONG: It’s time for Michael Phelps to get down to business in Mesa.

RATHER IT SHOULD BE: It’s time for Michael Phelps to have some fun in Mesa participating in the sport he loves!

Why is the USA Swimming coverage always so horrible? Are they that cheap that they can’t afford the rights to the Universal Sports feed?

I have a high pitch squeal going on. So yeah…