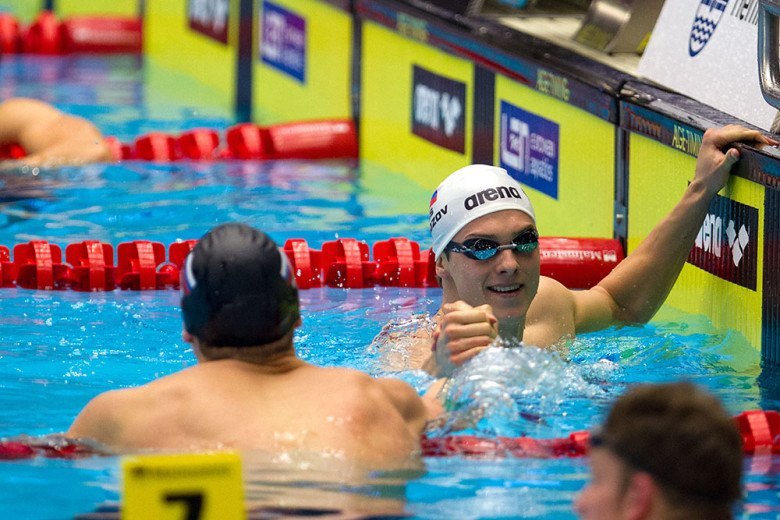 Vlad Morozov won the 50 back already this week, and he'll take to the pool for his signature 50 free for Russia this morning. Current photo via Jesper Nielsen | www.sttfoto.dk

We’re up to day 6 at the 2014 European Championships, with heats of five more events slated to take place from Berlin this morning.

Russian Vlad Morozov will take to the pool for the 50 free after winning the 50 back but disappointingly missing the final of the 100 free. In other races, Sweden’s Sarah Sjostrom will look to get back on top of the women’s race. She was basically unbeatable in the early goings, but was nipped for the 100 fly title by .01 last night courtesy of Denmark’s Jeanette Ottesen.

In the 200 fly, Hungarian Katinka Hosszu will go for her third straight European title. Also taking to the pool will be the women’s 50 breast and the men’s 4×200 free relay.

World Record holder Ruta Meilutyte did just what she needed to do this morning to lead the field in the women’s 50 breast. She leads all competitors heading into semifinals with a 30.73. She has the Netherlands’ Moniek Niehuis (30.75) and Sweden’s Jennie Johnsson (30.79) right at her heels, while Dorothea Brandt (30.82), Sycerika McMahon (31.02), Mariya Liver (31.13), and a tie between Rikke Moeller Pedersen and Hrafnhildu Luthersdottir at 31.21 rounds out the top 8.

Meilutyte will have plenty left with her semifinal and medal rounds, and she typically gets faster during subsequent heats. She has been a 29.90 already this year, and was a 30.14 at the Youth Olympic Games, so we can use those times to compare with how she performs tonight.

McMahon is looking very good after somewhat disappointing performances in the 100 and 200 meter distances. She is just off the Irish National Record of 30.93 held by Fiona Doyle from the World Championships last summer, and she’ll have a great opportunity to better that standard tonight. It is a very tight and competitive field all around, and she will be right next to Meilutyte in the second semifinal heat, so we know she’ll have a great pacesetter in the corner of her eye.

Shockingly, Vlad Morozov did not qualify for a second swim as 3 Russian teammates placed ahead of in morning action. Though Morozov took 12th in prelims with a 22.35, Tikhobaev and Grechin will both represent Russia in the semifinal rounds tonight. This continues Morozov’s woes in the freestyle events at these European Championships, and it is particularly shocking that his 50 free was so sub-par considering how good his 50 back was just two nights ago.

Belmonte Garcia, Hosszu, and Jakabos won each of their respective heats, and all of them are exactly where they need to be heading into semifinals. Van Berkel, a 25 year old from Switzerland, had a phenomenal swim considering she was entered with a 2:10.44, so it will be interesting to see if she can continue to carry that momentum forwards. In fact, her swim this morning is a new Swiss national record as she previously held the record of 2:09.68 from back at the 2011 World Championships.

As has been typical all week, Sarah Sjoestroem set the early pace as she posted the top time at 24.38. Considering she is only four tenths of a second off her personal best from Swedish Nationals and didn’t have to work too hard to win her heat, she is in pretty good position leading into semifinals.

As Jeanette Ottesen just clipped Sjoestroem yesterday by one one-hundredth of a second in the 100 fly, it’s looking like we’ll have another showdown to look forward to in the splash and dash both tonight and in the medal rounds. Regarding individual events, Sjoestroem has already won the 50 fly and 100 free this week, so it will be interesting to see if Ottesen can even the score. Of course Halsall was the top seed entering Saturday, so we have plenty of names to look out for in the next two rounds.

Also of note, once again 36 year-old Alshammar was able to improve on her seed time (seeded 25.17), and as one of the most decorated European athletes of all time, she continues to put her longevity on show.

The Germans were very consistent in their splitting, though they may not have held back too much this morning in terms of roster selection. The Russians can still substitute Alexander Sukhorokuv and Artem Lobuzov into their finals relay to give them a potential extra boost, so we will have to see how close the finish is in finals.

Dutch commentator #1 about Belmonte Garcia in the 200 fly: “12 years ago she was already good at this distance, finishing 4th.” Commentator #2 jumps in: “And she’s only 23. Imagine how good she was back then.” Then they continue to talk as if nothing is off. Yesterday one of them commentated the men’s 200 fly as if the 100 meter mark was the finish: “the field is closed, it comes down to the touch now”. After the swimmers turned, he initially tried to smoothly cover up his mistake by changing his sentence before admitting it, lol. Vyatchanin apparently is absent from Euros because he was “preparing in the US” for something. Surely not representing a European country since forever… Read more »

Seems like a trend. The much lamented commentary on British Eurosport is similar!

Maybe I am better off then. Nothing wrong with the Finnish commentating either on Finnish national broadcaster or Eurosport.

I’m sure Sarah’s defeat in the 100m fly to Jeanette Ottesen yesterday sharpened her a bit. However, it also surely boosted Ottesen’s confidence on herself and she’s got clearly the best start and first underwater among the field. And if Halsall can reach her maximum level, things may well turn out to be very exciting.

It’s still very annoying that despite how well Denmark is doing here, Danish TV are not covering it except on an on-demand pay channel or Eurosport. Nothing on any of the national channels.

Yes, your national channels really should cover this meet.

If Finnish swimmers competed at the same level as Danes right now, on top of live coverage of every session we would have discussion studios before the final session of the evening starts etc etc.

The process to break trough onto mainstream TV may be long and frustrating because it may require years of continuing success before broadcasters realize “hey, we should broadcast these events live”.