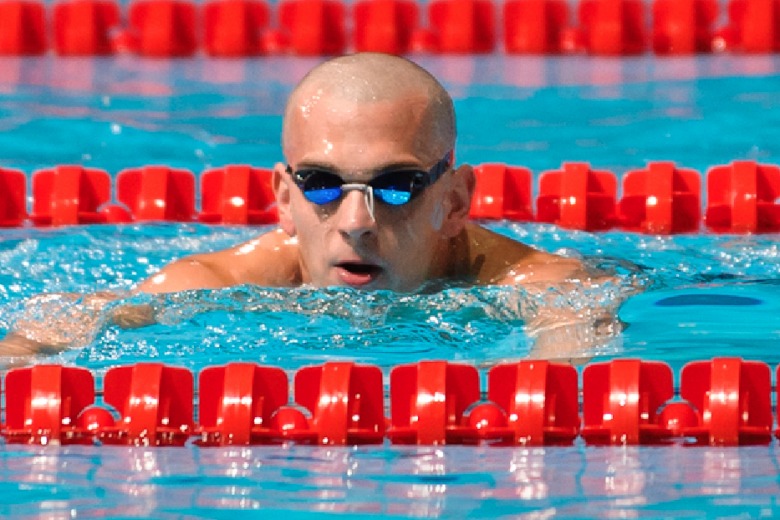 Laszlo Cseh is looking for his fifth (you read that right) consecutive European Championship crown in the men's 200 IM tonight. Current photo via Victor Puig

After perhaps their best two day stretch ever at a European Championships, Great Britain will look to keep the tide rolling on night three of the 32nd LEN European Championships.  While the British don’t have many representatives competing in finals events tonight, they are set up well to have another loaded finals session tomorrow with some key semifinals swims this evening.  Sixth-seed Elizabeth Simmonds and top-seed Georgia Davies will look to both advance into the championship final of the women’s 100 backstroke, while the world’s #1 200 breaststroker Ross Murdoch and countrymate Andrew Willis are striving to set up another 1-2 breaststroke finish.

There are plenty of individual stars from around the continent looking to shine tonight, as well.  Compared to what she has been doing all season, tonight’s session will be a “light” one for Hungary’s Katinka Hosszu; she’ll be competing in the women’s 200 IM semifinals shortly before the women’s 100 free final and 100 backstroke semifinal later in the session.  In that 100 freestyle, Hosszu will be hard-pressed to match Sarah Sjostrum and Femke Heemskerk in what should be one of the best head-to-head races we’ll see all week.

One of the bigger stories of the meet has been the disappointment of French Olympic gold medalist Yannick Agnel.  After failing to final in the 400 free, Agnel managed to sneak into the 200 free final in seventh position overall.  With a lane in tonight’s final, anything is possible for the defending Olympic champion.

This one was never in doubt.  Defending European Champion Gregorio Paltrinieri led wire-to-wire, opening a 3.5 second lead over the first 400 before really laying the hammer down on the field.  By the time the clock stopped, Paltrinieri’s lead had eclipsed ten seconds, with a new overall European Record time of 14:39.93.  Not only was that swim more than four seconds under the previous continental record (Yuri Prilukov, 14:43.21), it also makes Paltrinieri just the fifth swimmer in history under the 14:40 barrier.   The 19-year-old Italian truly dominated this race, turning in the fastest split in the heat across every 50 over the first 1250 meters.  It shouldn’t come as a surprise to say that Paltrinieri is now easily the #1 ranked swimmer in the world this year.

Not to be discounted, Pal Joensen of the little-known Faroe Islands had a strong back half to overtake Paltrinieri’s countryman Gabriele Detti to finish second in 14:50.59.  That’s the second-fastest time of Joensen’s career behind his 14:47 from 2011 Worlds, setting him up to once again be a competitor for a top five finish next summer.  Detti was closest to Paltrinieri over the first 800 meters before fading a bit to third in 14:52.53, earning his first long course medal at a major international competition.

Britain finished just out of the medals, with Stephen Milne and Jay Lelliot finishing fourth and fifth, respectively.

Ross Murdoch (2:08.65) narrowly missed the championship meet record with Andrew Willis (2:08.93) close behind in his heat, as Great Britain set themselves up for another potential 1-2 breaststroke finish tomorrow night.  They will be challenged heavily by 2013 World Championship silver medalist Marco Koch of Germany.  Koch, the top seed out of prelims, cruised through the second semifinal to grab the second overall seed for tomorrow, touching in 2:08.83.  While there are five other great swimmers in the heat, the race should be in the middle of the pool tomorrow.

Statement swim here: despite having the 100 free final later in the session Katinka Hosszu pushed the pace through the second semifinal of the women’s 200 IM to touch in 2:08.41, nearly three seconds ahead of the next fastest qualifier.  The Hungarian ironwoman was the fastest amongst the 16 swimmers across each of the four disciplines, leaving little doubt as to who the favorite will be tomorrow night.

Aimee Willmont of Great Britain was a distant second in the heat in 2:12.39, earning her the third overall spot for tomorrow night.

Velimir Stjepanovic of Serbia went out fast early and held off Paul Biedermann of Germany to double up and win the 200 freestyle in 1:45.78, touching out Biedermann by just 0.02.  This has been a breakout week for Stjepanovic, who took home gold in the 400 freestyle earlier this week in 3:45.66.  Biedermann, the three-time defending champion in the event, bridged the gap between Stjepanovic and the field between the 100 and 150 mark, turning virtually dead-even with a 50 to go.  However, Stjepanovic found enough in the tank, leaving Biedermann settling for silver in 1:45.80.

Yannick Agnel, who has had a bit of a disappointing week after looking exceptional all year in his first go-round under Bob Bowman at  North Baltimore Aquatic Club, passed Dominik Kozma of Hungary and Pieter Timmers of Belgium over the final 50 to get into bronze medal position, finishing in 1:46.65.  Despite the small victory, that time is nearly 2.5 seconds slower than when he won gold a year ago at the 2013 World Championships.

With Ruta Meilutyte not in the picture this week, the door was wide open for Rikke Moeller Pedersen to win her first long course 100 breaststroke title at a major international meet.  Pedersen capitalized, winning by nearly a full second in 1:06.23, taking down Yuliya Efimova’s meet record in the process.  That’s a hair off her season-best time of 1:06.19, but it should give her confidence to be competitive next summer at Worlds.

Jennie Johansson of Sweden held off the field for second, touching in 1:07.04, and 17-year-old Arianna Castiglioni of Italy was third in 1:07.36, claiming her first medal at a big international meet.

Viktor Bromer put together an impressive swim in the second semifinal, finishing in 1:55.55, clipping his own Danish national record and earning the top overall seed heading into tomorrow night.  Pawel Korzeniowski will be next to Bromer in lane five tomorrow with his 1:56.43.  As a two-time former champion and current meet record holder, the Polish veteran will provide plenty of pressure on Bromer.

With no other events in her way tonight Sarah Sjostrom had a chance to really go after her 100 free tonight.  After flipping just ahead of Femke Heemskerk, Michelle Coleman, and Pernille Blume, Sjostrom hit the gas over the final 50, splitting nearly 0.9 seconds faster than anyone in the field over the final 50 to finish in 52.67, crushing the previous meet record and taking over the top spot in the world.  That time is also a personal best and new Swedish record for Sjostrom.

Heemskerk, the top seed out of semis, finished a distant second in 53.64, just ahead of Sjostrom’s teammate Michelle Coleman, who clocked in at 53.75.

“Five-peat” doesn’t have the same ring to it as “three-peat” or “four-peat”, but when you put it in the context of “being the best in your continent for nearly a decade”, it doesn’t matter how forced it sounds.  Laszlo Cseh wasn’t particularly great in tonight’s 200 IM final, but his 1:58.10 was good enough to win his fifth consecutive long course European Championship.  The highly-decorated Hungarian veteran opened up an early lead and had just enough in the tank to hold off Philip Heintz (1:58.17) and Markus Diebler (1:58.29) of Germany and Roberto Pavoni (1:58.22) of Great Britain.  Diebler actually took the lead at the 150 mark coming off a great breaststroke leg, but couldn’t hold off his three closest competitors.

We don’t have any information on this, but we imagine the list of five-peat European champions has to be pretty short.

2 highlights for me tonight.

1. Agnel in the 200 free. It will be a miracle if he wins. But miracles can sometimes happen. 🙂
2. Can Heemskerk beat Sjöström in the 100 free final?

“Scheduled to go live” but isn’t the 1500 being raced right now? I wanted to see that.