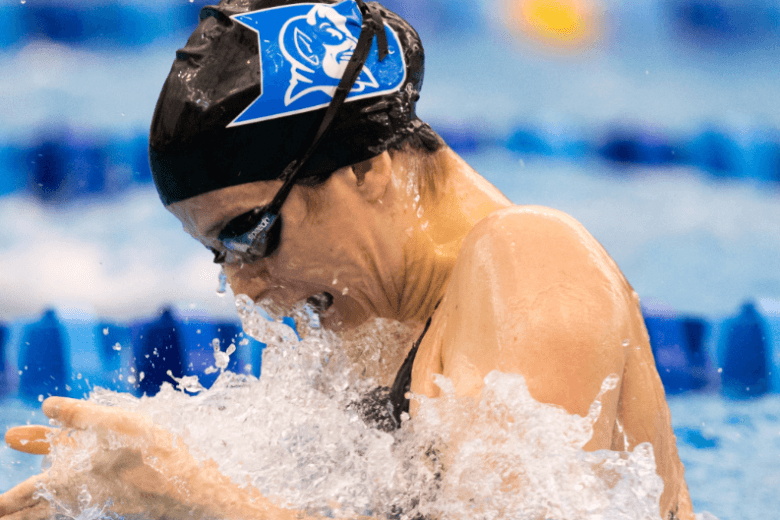 Duke senior breaststroker Christine Wixted will have more than individual events to swim at this year's NCAA Championships, as the Blue Devils have qualified their first ever women's relay for the meet.

There’s now a ton of huge meets going on, which means there’s always plenty of “extra” stuff to look at after the sessions are done. There has been an absurd number of school records broken among all of the conferences, which shows off just how fast college swimming has gotten

Last year, Duke sent two juniors, Christine Wixted and Lauren Weaver, to the NCAA Championships in individual races. While that was quite an accomplishment, the Blue Devils wanted more this year, and they got it.

Th team of Jessie Sutherland, Wixted, Maddie Rusch, and Weaver combined for a school-record breaking 1:37.91. Not only did that break the school record by 3 seconds, it made this Duke’s first-ever women’s relay to qualify for the NCAA Championships.

The Georgia women lost both Allison Schmitt and Megan Romano, two of the best American freestylers, to graduation after last season, and there’s no denying the impact of that.

However, using that scholarship money on a great immediate-impact freshman backstroker/sprinter (Olivia Smoliga), along with the continued development of other key pieces (Melanie Margalis, Shannon Vreeland, Jordan Mattern) has left an incredibly well-rounded Georgia team.

They’re so well-rounded in fact that they haven’t lost an event through two days at the 2014 SEC Championships. Apples-to-apples, they’d lost two events by this point of last year’s NCAA Championship, and swimmers like Melanie Margalis who are repeat champions look even better than last year.

The biggest sign so far is their 200 medley relay, which they won on Tuesday for the first time since 2006. That relay the past few years has been Georgia’s bane, and now is a strength of theirs. They lead the country in which just a short year ago, they placed only 14th at NCAA’s.

We were blown-away by the anchor leg that Wisconsin junior Ivy Martin put in on the Badgers’ 200 medley relay. She split a 21.18 coming home to make some very good anchor legs around her look not-very fast.

Even more kudos to a not-very-well-known group of teammates with her to put her in position for that impressive anchor, which gave the team the silver medal. Sophomore Anna Tamblyn led off (24.87); sophomore Anna Meinholz, who’s developed into a very good breaststroker this year, was 2nd (27.49); the relay’s lone senior Rebecka Palm swam fly (23.27), which left the Badgers within a second of the leaders. In a Big Ten that’s not sprint deep, that’s close enough for Martin.

What’s really distinct is Martin’s turnover. She has an extremely high stroke rate, which helps because she’s not the country’s tallest sprinter at 5’8″, and for as fast as she is, that stroke rate makes her look even faster. Here’s to hoping she can join the sub-21 club later this week or at NCAA’s.

It looked like Louisville’s first, and only, season under the banner of the American Athletic Conference (technically, it’s the Big East that Louisville used to be in) could be a runaway. For the men, it still looks that way, as their 800 free relay won by 14.5 seconds over runners-up UConn (that’s Louisville’s best relay on the men’s side, probably).

UConn’s diving is going to keep them in this, and while ultimately Louisville should be the winners, there will be enough good races at this meet to keep fans entertained.

San Diego State Back to NCAA’s For Second-Straight Season

The San Diego State Aztecs have earned their second-straight ticket to the NCAA Championships in a relay, thanks to a 1:37.97 200 medley relay. That’s almost exactly the same time as the 1:37.93 that won the Mountain West title and got them there last year.

This San Diego State relay is two sophomores and two freshmen, which means that this mid-major power could have many, many years of NCAA relay swims to come (a few individuals here-and-there have been a relatively common occurrence for this team in the last few years).

Their counterparts at Boise State, also with a very young relay, was 2nd, just missing the automatic qualifying mark in 1:38.21. Look for them to time-trial that relay again to cut off the two-tenths needed for a ticket to Minneapolis.

Update: Boise State has time trialed their 200 medley, and with a 1:37.75 also cleared the NCAA Automatic qualifying time. They too just need an individual qualifier to book their tickets to NCAA’s!