2012-2013 Women’s College Swimming Previews: No. 5 Arizona Juggles Transfers In and Out 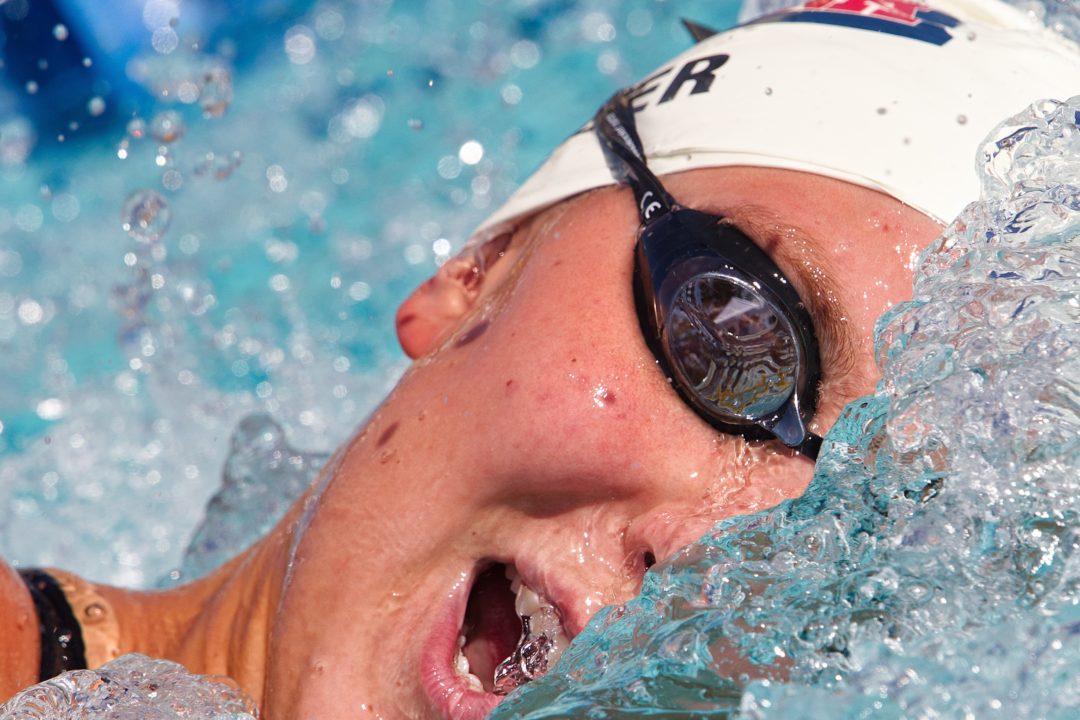 Arizona's roster has been shaken up quite a bit this year, but the changes could well help them.

Arizona’s roster has been shaken up quite a bit this year, but the changes could well help them.

Sprint Group: Led by sprinter star Margo Geer, Arizona’s practically guaranteed top-3 individual finishes in both the 50 and 100. Their 200 free relay team of Geer, Flederbach, Darlington, and Peacock earned a strong third place finish at NCAAs last year but lose some key members of their sprint group. Sarah Denninghoff and Aubrey Peacock both transferred out. Denninghoff had bests of 22.71 and 48.59, but much faster relay splits. Peacock had flat-start bests of 22.79 and 50.07 but she’s three-times split 22.0 or better on relay anchors at NCAA’s. Still, Geer’s huge 21.69 flat start gives them a lot of room to work with, and incomer Taylor Schick, who comes in with a 22.7 and 49.6 will look to step up on the sprint relays.

The Wildcats only lose Alyssa Anderson off the 400 free. The other three, Geer, Flederbach and Monica Drake all return.

Back: The loss of Aubrey Peacock and Sarah Denninghoff will hurt the Wildcats, but they’ll turn to incomer Bonnie Brandon as well as returner Lauren Smart. Brandon was 4th at Olympic Trials in the 200 back and 5th in the 100. Brandon’s 53.4 doesn’t quite compare to Denninghoff’s 4th place 51.3, but Smart has been sub-52 before and could easily improve upon her 10th place finish from last year. Brandon’s best of 1:53 and Smart’s best of 1:54 both have NCAA scoring potential.

Breast: Ellyn Baumgardner returns for a senior year after a hugely successful summer, finishing fourth at trials and qualifying for the short course world’s team. She’ll be joined by Chelsey Salli and freshman Emma Schoettner, whose season has gotten off to a great start, to comprise a very powerful breaststroke group. Schoettner’s 200 will be a strong addition to a breaststroke group that is usually stronger in the shorter distances–she’s already been 2:13 this season.

Medley Relays: Losing backstroker Denninghoff serves a blow to the medley relays, but when you’ve got Baumgardner, Smart, and Geer on the back end of it, it can only be so hard to recover. They’ll look to someone to fill Denninghoff’s shoes, or perhaps will move Smart to the backstroke leg and look for a different flyer.

Distance Free: Bonnie Brandon will be huge for Arizona here. She was the #2 recruit in her class and has the potential for a pair of top-5 finishes in the distance freestyles this year, coming in with best times of 4:38 and 16:02. Alyssa Anderson’s 4:34 will certainly be missed but there’s plenty of young talent to contend with.

800 free relay: Only Drake and Geer return from this relay, and losing Anderson and Denninghoff will be tough for the wildcats. Bonnie Branon is a 1:46 freestyler so she’ll definitely be in good position for a spot here.

IM: Some of Arizona’s IM speed transferred out, but freshmen Bonnie Brandon and Emma Schoettner have already shown strength there. They can only go up in these events, after failing to score any points in the 200 and failing to qualify for NCAAs in the 400 in 2012.

Fly: Led by Lauren Smart whose 53.0 was 23rd at NCAAs last year, this will be a strong group. Smart’s best is a 52.60, and she’ll be looking to better not only her performance from last year but lower her career-best mark in her final year. In the 200 it was really only Alyssa Anderson, and her loss will create a gap for them to fill.

Diving: Samantha Pickens, 3rd at NCAAs in the 3m springboard and 4th in the 1m, will be a huge asset for them here.

2012-2013 Outlook: Led by Coach Eric Hansen, who now has a year under his belt, the Wildcats have the ability to be a real force this year. They pulled off a top 5 finish at NCAAs last year with some of their best swimmers not quite in top form. Certainly the loss of points from Anderson’s graduation will be difficult to bounce back from, but the talent is definitely there.

Deborah Roth should be mentioned in the back/relay categories if she get’s back to where she was 2 years ago. Did she leave Cal because she didn’t make NCAAs last year?

Deb Roth is sitting the year out, and won’t swim until next season.