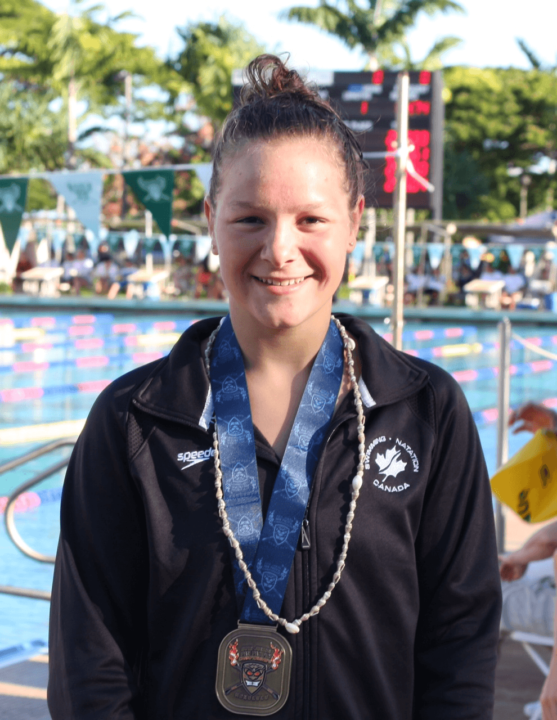 After visiting multiple American colleges, Erika Seltenreich-Hodgson has decided that UBC was the place for her (Photo Courtesy: Swim Ontario)

As more-and-more of the top Canadian swimmers head south of the border for college, Swimming Canada won one battle against the mighty lure of the NCAA yesterday, as Erika Seltenreich-Hodgson has decided to stay home and swim for the University of British Columbia Thunderbirds next season.

Seltenreich-Hodgson made at least two trips stateside, visiting both Indiana and Georgia. Not a surprise, as those are two of the most popular destinations for Canadian women on the American college circuit. Among the Hoosiers hailing from Canada are Brenna MacLean, Brooklyn Snodgrass, and Bronwyn Pasloski. Georgia just got in on this game last year, when they grabbed two big freshman Brittany MacLean and Chantal van Landeghem.

Instead, Seltenreich-Hodgson will head west from her native Ottawa, where she swims for the Greater Ottawa Kingfish, to Vancouver and swim for UBC.

Her greatest promise, however, is as a future Olympian in the IM’s (she already qualified for Junior National teams that were sent to Jr. Pan Pacs and the Mare Nostrum series). Her bests in those races long course are 2:12.93 and 4:43.80.

She is the third-fastest Canadian in history in the 200 IM, ranks 30th in the world this year, and seems to only be getting better. That’s what really stood out about her season: she just kept getting faster. She was a 2:14.3 at Trials in March, then a 2:13.9 at the French stop of the Mare Nostrum in June, then a full second better at Jr. Pan Pacs in August in 2:12.93. She actually won that race ahead of top American swimmers like Celina Li (Cal) and Kaitlyn Jones (Virginia).

All of that led to almost three seconds in drops from the 2:15.6 that she went in 2011 at Junior Worlds.

The Thunderbirds are stacked with many of Canada’s top young swimmers, including Coleman Allen and Luke Peddie on the men’s side, both of whom will swim at the World Short Course Championshisp in December; plus Savannah King, Tera van Beilen, and Heather MacLean on the women’s side, who were all Olympians. They are also the team of the three youngest sisters in the Pierse family.

Their close connection with the Vancouver Dolphins program is what allows them to attract so much top talent. The top club program in that country will be thrilled to get their hands on a swimmer who has already shown so much potential.

Well one thing in her favour ( and perhaps the only thing)- she will be treated better by Swimming Canada than the the Canadians who go to the NCAA.

I am curious to know why? Any thoughts?

Swimming Canada changed their policies so that if one of their swimmers chooses the NCAA route, it is extremely hard (based on world rankings) for them to receive national funding. Nobody on the mens side in the NCAA program gets support, even swimmers like both Swanstons, Bobrosky, and Bagshaw. Pretty harsh punishment for some of their best swimmers…

I think there’s a bit of a misunderstanding here. It is a SPORT Canada (not Swim Canada) policy for Canadian NCAA athletes to only receive funding when they are training in Canada. This is the same in every sport. While Top 50 in the world isn’t an ‘easy’ standard (nor should it be), it is also the same for swimmers who stay in Canada.

Erica went to a program where she gets to work in a program that has two coaches who have led swimmers to Olympic medals and multiple WR’s and produced 8 2012 Olympians. I think that also works in her favor.

As of this fall, Developmental carding has been removed for any Canadian swimmers in the NCAA,

As it is with all sports, no sport can use their development cards for athletes training in the States. This has been a bigger issue in Athletics but obviously effects swimmers as well. Sport Canada decided that if an athlete has chosen to go to the States for their development, then the athlete has chosen for that university to be financially responsible for their development to elite levels. Agree or disagree with the policy, just recognize that it’s a decision made higher up the line than just Swim Canada. Sport Canada pushes for all sports to cut carding at ALL levels to athletes going to the States constantly. Their opinion is why should they pay a cent to athletes that… Read more »

Swim Canada still submits the swimmers to Sport Canada that they want to receive cards. Tough pill to swallow when funding is going to slower swimmers.

BIG10fan right, Astute Observer wrong. Swanston, Bobrosky, and Bagshaw would have rec’d 900 per month while back in Canada during the Summer. They’re all $3,600 poorer now. Swimming Canada would have supported Erica since she’s top 50 world for the 4 months she would have been home. I’m not sure if she would have been better off financially to go to Georgia/Texas v. British Columbia.

Um… Why? She gets tuition paid for AND the scholarship she got from UBC (I’m sure it’s not zero) AND gets $1500 a month in her pocket AND if she does well gets to keep her prize money and any potential sponsorships. Is that really financially worse than going NCAA?

Also visited Texas A&M, quite possibly the most popular destinations for Canadians if one were comparing such things.

Well, Vancouver and College Station are probably about as different as two English speaking college environments can get.

I know she was talking to Virginia Tech and thought she visited a couple weeks ago? It would have been nice to see her in the NCAA.