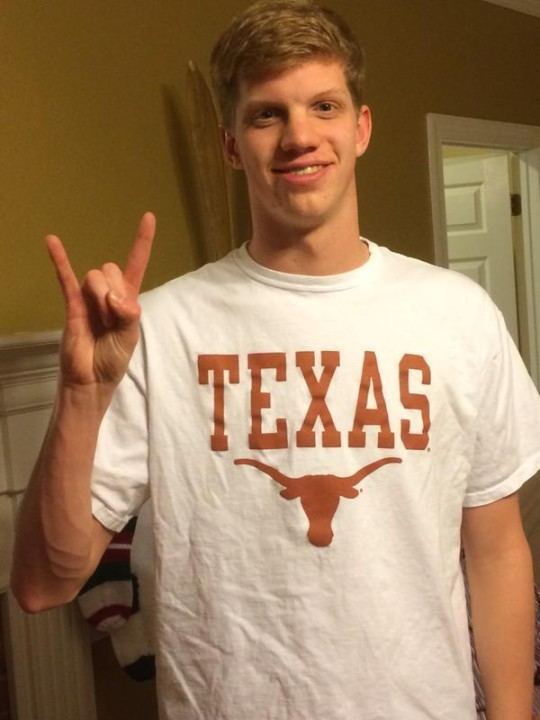 With a 'Hook 'Em' and a picture, the suspense was over for the last recruit ranked in our top 20 in the class of 2015. Current photo via Townley Haas

Christmas came early for the Texas Longhorns men’s swim team, as after much deliberation, freestyle phenom Townley Haas has verbally committed to Eddie Reese’s squad. Haas, ranked #2 in the class of 2015, was the last of the SwimSwam top 20 recruits in the class of 2015, male or female, to announce his college decision, and is the last American likely to have an impact at the NCAA level as a freshman to publicly commit.

Haas is a rarified type of recruit who will immediately be an NCAA scoring threat at every distance from 50 yards to 1650 yards in the freestyle events, though it seems most likely that the 50 won’t be in his individual repertoire. Haas is one of the best all-around freestylers coming out of high school not only in his class, but in his generation.

And for all he’s done in yards, Haas has been even faster in long course, and seems to be on-track for a potential Olympic bid (leading many to speculate that part of the reason for his long decision-making period was toying with the idea of not participating in NCAA swimming until after the 2016 Olympic Trials).

Haas joins a great Texas distance freestyle tradition that is heavy with a history of success, including names like Michael McBroom, Michael Klueh, Jackson Wilcox, and Matt Hooper. Haas’ best time would already rank him 5th, behind those 5 men, on Texas’ all-time rankings.

By the time Haas arrives in Austin, Clay Youngquist, Nick Munoz and Jake Ritter will be out of eligibility, but Haas will still have names like a season with Sam Lewis, a season with Matt Ellis, and the breakout sophomore sensation Clark Smith to train with across his wide range.

He’ll also most likely have some of the above as post-grads, plus Michael McBroom – the 2013 World Championships silver medalist in the 800 meter free, around. For a swimmer as good as Haas, it will take more than one swimmer to challenge him in practice across the freestyle distances, and the 2014 NCAA runners-up have the swimmers across that range to do so.

Townleys has been on my summer team, Church Run, as long as I can remember! He is going to do great things and I cannot wait to see him in the Olympics! I’ll be rooting for you Townley!!!!!!!

Great technique. Not everybody can kick that well and have a fast, easy turnover.

Awesome, awesome news and a most excellent choice.

Hopefully he will continue to improve there to reach the international level in the next years.
Clay Youngquist was very promising (1.48 in the 200 free LCM in 2010) and didn’t improve since then.
Mr Haas has the great mix of speed and endurance to become a 200/400 free international contender.
And about 2016 his best shot is the 4X200 free relay in my opinion. If he can swim 1.46 low then he can qualify for Rio. USA needs new talents on that distance. Haas, Conger (I still believe in him for the 200 free, but does he want it?), Rooney and Malone are these new talents. And of course Lasco in 5/6 years. 🙂
Big pick for Texas.

Defenetly one of the best freestylers i have seen in Usa this year ! very promising relay team mate for RIO along With Malone and Rooney As U mentioned very well .

Poolswam – yes, the lcm time doesn’t exactly match up, but remember that he didn’t swim the 1500 at juniors or nationals this summer.

Any insight into what the hold up on committing was? Sort of thought he was waiting to see how things played out with Bauerle at Georgia, but he didn’t commit to the Dawgs.

Had never even had the chance to speak with Bauerle, and he and family were surely waiting to do that. Couple that with effort Reese put forth recruiting and visiting his family, and that probably sealed the deal. All three of his college choices surely kept their offers on the table until he was ready to decide. But Bauerle not being able to participate in recruiting and talk to them until later in 2015 probably cost them. The timing of the NCAA’s decision related to him seems to be what ultimately pushed Texas to the top.

Agreed — Cal and Texas are looking ridiculously loaded for the next 3-5 years. That is going to develop into a great rivalry.

Texas could have at least ironed his shirt for the picture!

I think he has more important things on his mind!!! Great job T!!!!

I was just kidding. I’m sure we will see Townley in a future olympics. Great snag for Texas. Congrats to Townley!

18 year old boy? I’m 27 and I just learned how to iron and why it is important. Cut him some slack man! We’re both uva fans here!!!