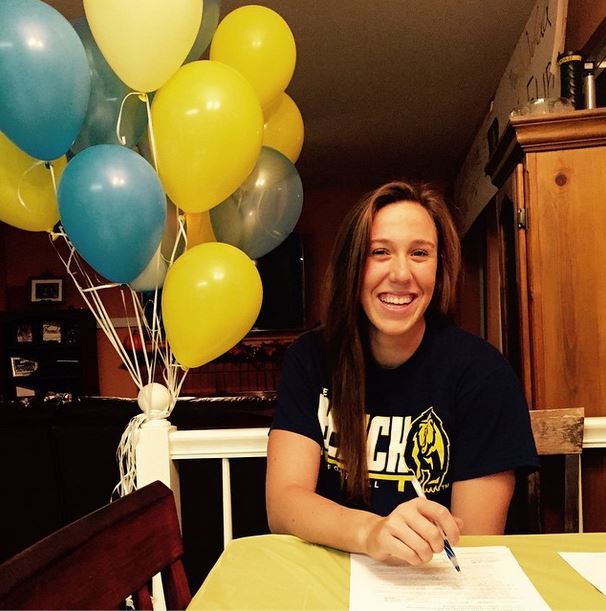 After keeping the swimming fandom in a state of suspense throughout the recruiting season, national high school record-holder Abbey Weitzel has signed on with the California Golden Bears. Current photo via Abbey Weitzeil on Instagram

The last major top-10 recruit in the nation on the girls’ side has made her choice official on National Signing Day. After keeping the swimming fandom in a state of suspense throughout the recruiting season, national high school record-holder Abbey Weitzel has signed on with the California Golden Bears.

She announced her decision via Twitter and Instagram Wednesday night, posting the above picture of her signing on with Cal along with this message:

“After a very tough decision, I have decided to become a Golden Bear! Super excited to join the Cal Family! #nationalsigningday #gobears”

Cal already had an outstanding class, and the addition of Weitzeil might just push them to the top of the nation. She’s an elite-tier sprinter already, with lifetime-bests of 21.98 and 47.59 in the 50 and 100. She holds national high school records in both and looks like the kind of immediate-impact sprint sensation that college programs covet.

Weitzeil’s value gets inflated even further by the NCAA’s double-point relay events. Weitzeil is great even up to the 200, and could be a legitimate fit on any of the 5 NCAA relay events. She’ll immediately give the Golden Bears another blue chip stud in the absence of Missy Franklin, who is expected to turn pro after this season.

Weitzeil’s a very solid swimmer through the sprint back and fly, too, though she’ll likely stick to freestyles primarily. Her lifetime-bests in the 50 and 100 free would have already garnered her All-America status last season, as Weitzeil would have taken 7th in the 50 and 5th in the 100 at the NCAA Championships.

Weitzeil comes from the Canyons Aquatic Club and Saugus High School. She’s probably a true #1-prospect in the nation for any class that doesn’t feature Katie Ledecky.

She’s also the fourth swimmer in the top 5 of our recruiting rankings to commit to Cal. (Others include #3 Kathleen Baker, #4 Katie McLaughlin and #5 Amy Bilquist). Though Ledecky is a huge get for Stanford (which also has IMer Ella Eastin in the top 10), the Weitzeil signing makes Cal’s class look awfully scary as the two Pac-12 rivals compete for the top recruiting class in the nation.

Someone tell this “POL” clown that a lot of people care about and are fans of NCAA swimming. It’s always fun and I have been a follower for decades.

I have only one complaint about NCAA swimming. It’s time to change to 25 meters and get away from the antiquated 25 yards format. NCAA Track and field made the switch to meters at least 35+ years ago.

Then world records could be set at the NCAA meet. JMHO.

Interesting, as I live in a HS school district that’s converting 5 SCM pools to SCY. I’m sure you realize that changing a 440 yard track to 400 meters is way easier than converting a pool. The 1st SCM to SCM is going to take about 10 months. The other 4 may go a bit quicker after they learn how to do it.

I don’t think it matter who receives what… I’m just excited that these girls are going to Cal! Going to be fun watch NCAA over the next couple of years! 🙂

Everything in a public university I public information including scholarships. You just need to ask. They must disclose.

you’re saying I can find out how much each swimmer is receiving as long as he/she is attending a public university? Even if that person isn’t an athlete I can just call up and ask how much money he/she is getting? I had no idea.

Time will tell. Sometimes the best laid plans don’t produce the desired results. On the scholarship issues, there are only 14 total available at any one time. With the new pac12 rules stating that the scholarship will be honored for 4 full years not single year scholarships that can be changed from year to year giving athletes “full rides” could significantly affect future recruiting years. No one can see the future. Hope all the swimmers in every program have a good time stay healthy and safe and get a great education.

Bilquist is most likely a walk-on or maybe 10-15%. Where as Abbey is faster… I believe that she will be on a full ride at Cal.

Being a friend with one of Bilquist’s old coaches I know for a fact she is a full ride athlete at Cal. 10-15% is hitting below the belt.

Yup. Like I said above(different Calswimfan), Amy Bilquist is a star on her own. Cal has two great additions to the 4 top 5 recruits that may either be walk-ons or be taking 10-15%. Those two are Jenna Campbell and Phoebe Lamay.

Let me revise this a little. Obviously, scholly $$ isn’t public information so I can only speculate. But I definitely don’t think Amy Bilquist is a walk-on. She might have to pay a little more than others just because she’s an out-of-state swimmer. But again, scholly $ isn’t something that’s public.

More important fact that we can all agree upon is that both Amy Bilquist and Cal fans are ecstatic that she’s coming to Cal! GO BEARS.

so does this render Bilquist useless at Cal? Commenters keep discussing the dream team of 3. Are Bilquist and Campbell walk ons?

Swimgeeker – Bilquist could be the heir to the Cal backstroke throne as well by the time she’s a sophomore. She’s the Jr. Nat champ there too..

Amy Bilquist is a star on her own. She is definitely not going to be useless and I don’t know who have said dream team of 3, but this team is now a Fantastic Four.

Yah I just didn’t know about her commitment until after I wrote the comment.

If you are awarded a scholarship of only $1,000 (and yes, there are a lot of Cal swimmers, both men and women who only get $1,000 for books) they can list you on the website as a “signed recruit”. If you are a “walk on” then Cal cannot include you in their press release, so none of these girls are walk-on. There are also kids who are actively recruited by the Cal programs, who get more $$ and a better deal from financial aid than the measly money offered to anyone but the superstars, but they won’t be listed in any press release, as that is somehow against the NCAA “rules” as you cannot combine the $1000 offered by the… Read more »

thank you for a quick run down!

Thanks for the insight into that!

I think we can all agree the NCAA rules make absolutely ZERO sense, and are scarcely enforced, but at least there are signs that they might be reformed in the coming years.

Another going to Cal! Wow, what can I say. This is unreal– history books about this Cal program (men and women) leading into Rio– and the amount of them that make Rio– will be written. What a cool part of history these kids get to be a part of. Anyone at Cal or near the area– this is a dream come true and be proud you get to witness it.

Live it up kiddos, swim hard, smile, and let your passion take you through some of the best years of your life, as you take them on with close friends (the teams and teammates they get to have at Berkeley), and go out there and enjoy the beauty of… Read more »

And none of them will ever win an individual Gold medal. Not even Franklin. LOL.

You’ve clearly stated that whoever it is, be it Katie Ledecky or Missy Franklin, that he/she won’t ever win a gold medal after going to college. That is your argument. No matter what college, a person’s swimming career is pretty much over when that person decides to swim in college.

Your argument breaks down because there have already been many college graduates who’ve won gold medals in international competitions, including the Olympics. How many Americans can you name that won a gold medal without going to college?

Just to start off, I’ll talk about who… Read more »

The RICH is getting RICHER.

I am rooting for Ivy Martin and Simonas Bilis to win titles at NCAA due to the stereotype you have to go to big name schools to be successful at the national level.

In case anyone was wondering about the relay math: