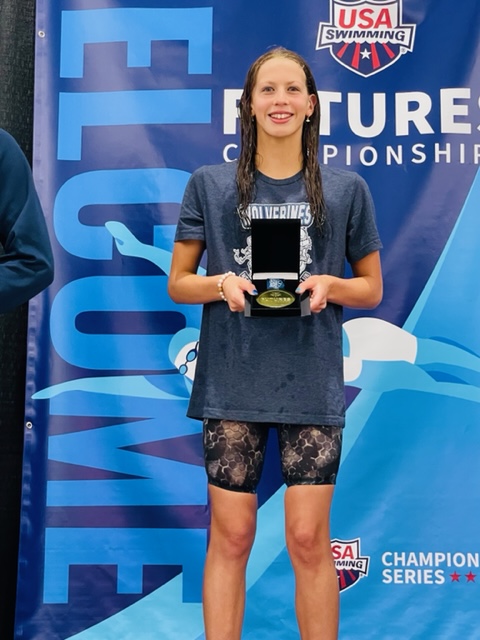 King's time was a best time by almost two seconds and now puts her at #38 in the 13-14 age group in the event all-time. Current photo via CARLEANNE FIERRO

Highlighting night 3 of Geneva Futures was Abby King of Westchester Aquatic Club. The 14 year old King swam a 2:32.75 in her win, dropping almost two seconds off her previous best time of 2:34.41. Notably, this time earned King her first senior nationals cut. In addition, it also places her at #38 in the event for the 13-14 age group of all time. King also broke the SPIRE pool record.

Breaking another pool record was Anna Boemer of Solo Aquatics. Boemer swam to a 59.90 in the women’s 100 fly and was the only swimmer under the 1:00 mark. The 2023 Michigan commit has been under the minute before as her best time of 59.64 is from earlier this month.

Winning the men’s 400 free relay was the Ohio State relay of Christopher Paxton, Brandon Day, John Satterfield, and Daniel Baltes as they swam a final time of 3:25.75. Satterfield had the fastest split with a 50.44. The men also broke the pool record by over three seconds.

The final win by Ohio State was in the men’s 100 fly. Servaas Fick touched in a 54.39. That was faster than his previous best of 54.46 which he swam just two weeks ago at Cleveland Sectionals.

Auburn commit Casey Cullen won the women’s 400 free in a 4:19.75. Cullen swims for Plymouth Whitemarsh Aquatics and had a previous best time of 4:21.75 which she swam earlier this month. Notably, her best time in the event last summer was a 4:26.96.

Firestone Akron Swim Team’s relay of Carrie Caniglia, Rachel Schiffli, Olivia Derodes, and Julia Mauter won the women’s 400 free relay in a 3:54.89. Mauter had the fastest split with a 57.18.